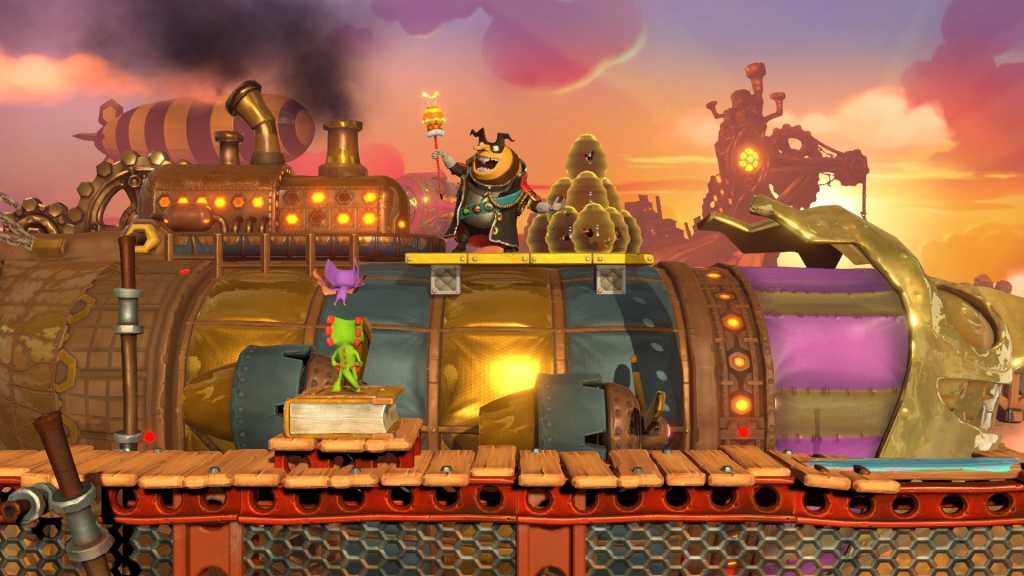 Yooka-Laylee and the Impossible Lair lacks most of the original game’s charm, and its final gauntlet is more tedious than taxing.

I’ll never finish Yooka-Laylee and the Impossible Lair—and no, not because it’s impossible. It’s not, but I do find it pretty tedious and that’s damning enough. After twelve hours of so-so platforming and a few stabs at finishing up its final challenge, I’m calling it quits.

And I’m a bit disappointed, I’ll admit. I’m one of the few who really enjoyed the first Yooka-Laylee and its take on Banjo-Kazooie era mascot collectathons. This sequel ditches that format for a Donkey Kong Country-esque side-scrolling platformer, and loses much of its character in the process. There are neat ideas here and there, but by and large they’re the parts that don’t involve platforming, while the meat of the experience is simplistic and overfamiliar.

Until it suddenly isn’t—but we’ll get into that.

As I said, Yooka-Laylee and the Impossible Lair is a side-scrolling platformer—most of the time. There are 40 levels total, plus the titular “Impossible Lair,” a difficult and lengthy platforming challenge that serves as the game’s final obstacle.

Or its first obstacle, if you’d prefer. You actually start in the Impossible Lair. Chances are you won’t make it far before dying though. See, returning antagonist Capital B has abducted the Royal Beetalion, honeybees that allow Yooka and Laylee to absorb hits. Your goal is to free the bees and use them to survive the Impossible Lair’s myriad challenges, and foil Capital B’s evil plot in the process.

You can free as many bees as you’d like. A bee is awarded for each level you complete, and hidden portals hide eight more, for a total of 48 bees. That’s 48 hits you can take in the Impossible Lair.

In theory that’s how it works, at least. I haven’t tracked down all 48 yet. I’ve netted 38, including two of the hidden bees. And as I write this, I’ve made it a little over halfway through the Impossible Lair.

It’s challenging, yes. But it’s also just kind of tedious. When you die you restart the Impossible Lair from scratch. That includes not just the platforming segments but also multiple simple-but-time-consuming fights against Capital B. At this point it takes me around 10 minutes to get back to where I died and it’s just not worth it.

That’s my own opinion of course, and maybe someone else will find the Impossible Lair precisely their jam. I have too many games and too little time though, and I hate feeling like I’m replaying parts I’ve already mastered only to die as soon as I reach the new hurdles, over and over again. I don’t have the patience for it.

There’s no build-up either, which feels inexcusable. The Impossible Lair is, despite the name, a shockingly easy undertaking outside its final challenge. Nothing prepares you for the Impossible Lair. There’s no slow build, no ramp, no point where you feel like it’s teaching you precision and mastery of the controls. Hell, the rest of the game allows you to skip whole sections of the level if you die five times in a row without making it to the next checkpoint. The Impossible Lair is effortless and then it’s just not, the difficulty curve more of a brick wall.

It’s all very well-trod territory, and The Impossible Lair puts little spin on it. For a developer that seems determined to break away from the “Spiritual Successor” label that defined the original Yooka-Laylee, The Impossible Lair does little to argue Playtonic’s case.

I have some hesitations about the art style as well. It’s gorgeous, but very hard to parse at times. “Is that a pit with a secret at the bottom or one where I’ll die?” Sometimes it’s more difficult to decide than you’d think. Needless to say, it shouldn’t be.

The Impossible Lair does have one neat gimmick, in that its 40 levels are actually 20, and then 20 “remixed” versions. But to talk about this we have to talk about the world map, so let’s do so.

In between bouts of platforming you’re taken to an overworld map where each level is represented as an oversized book, similar to the original Yooka-Laylee. But it’s more than just a fancy level select screen. It’s a whole second game, one that plays a bit like a top-down(ish) version of the last Yooka-Laylee. There are miniature dungeons (of sorts) to explore, puzzles to solve, secrets to discover, and more.

I’m pretty sure I spent as much time in the overworld as I did in the primary levels. And loved it, I should say. I genuinely enjoyed uncovering the map, searching for shortcuts and so forth.

The way the overworld interacts with the platforming levels is The Impossible Lair’s freshest idea though. As I said, each level has a “remixed” version. The twist: You unlock these B-sides through your actions on the overworld.

An example: Level 1_ is a sort-of “Factory” environment filled with conveyor belts—and appropriately, the book that represents it on the overworld map is found on a conveyor belt as well, looping around in circles. Flip a switch and you reverse the book’s direction, which then unlocks the alternate Level 1_ wherein all the conveyor belts are reversed as well.

That’s a relatively minor change, in the grand scheme. Other examples include ice levels that thaw and present new underwater passages, levels that get flipped upside down, a level that fills with smoke, and more—all driven by puzzles on the overworld.

It’s a neat dynamic that’s unfortunately let down by the fact that, as I said, the platforming itself just isn’t very engaging. I wasn’t really in a rush to play these reworked levels once I’d unlocked them. The fun was in the discovery.

I wish there were more of that charm scattered throughout. The writing, which played a major part in my enjoyment of the original, is all-but-absent in The Impossible Lair. Aside from the introduction there’s almost no dialogue of note. Occasionally you’ll run into characters from the last game, but they’re given so little screen time it’s hard to feel more than a passing “Oh yeah, that cannon/shopping cart/squid-doctor” before they’re gone again.

Some complained, probably rightly, that the first Yooka-Laylee had too many moments where you stood still and characters talked at you. The Impossible Lair feels like a weird over-correction though. Given how much character interactions and bad dad-jokes drove the first game, the absence here is sorely felt.

Yooka-Laylee and the Impossible Lair is one of those games that’s uniquely difficult to score. Is it bad? No. But did I enjoy it? Not really, and I don’t feel any draw to return.The Impossible Lair isn’t actually impossible, but it’s impossible for me, at this stage in my life. It could take a hundred more tries. It could take one. It doesn’t matter, because I’m just not feeling any draw to complete it.

Maybe it’s just not my style of game. I definitely have more nostalgia for Banjo-Kazooie than I do Donkey Kong Country, and nostalgia’s seemingly what drives this series. Perhaps they’ll doYooka-Laylee-cross-GoldenEye next. Or Yooka-Laylee-cross-Myst. Then I’ll be right back on-board.

But not this time.