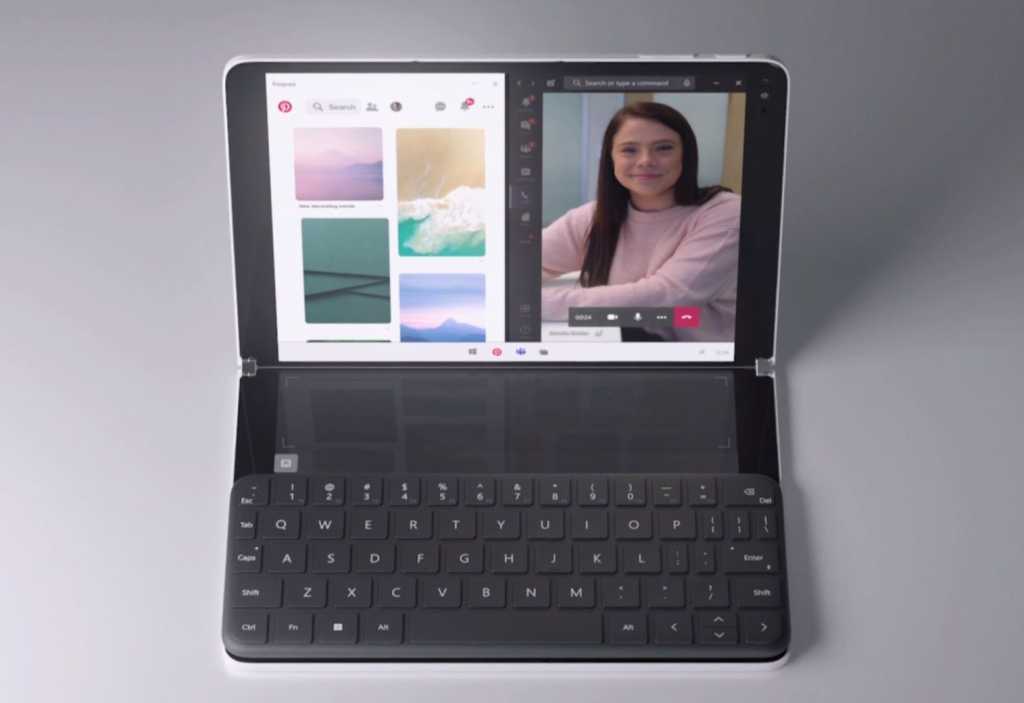 My Microsoft a-ha! moment came not with the surprise Surface Duo Android phone, nor with the two-screened Surface Neo, but when Microsoft unfolded the wraparound keyboard accessory that shipped with its dual-screen Neo prototype.

Why? Because tapping on glass loses its appeal beyond banging out a quick text message. Actual work requires a keyboard with travel, in much the same way that we wear comfortable, cushioned shoes for walking or running. The Neo’s keyboard is emblematic of what Microsoft is trying to achieve: flexibility.

We’ve previously told you what microprocessor diversity means for Microsoft, as well as its chip partners Qualcomm, AMD, and Intel. What we thought then was that Qualcomm would enable all-day battery life (which emerged as the Surface Pro X), AMD would pump up the Surface’s graphics firepower (the 15-inch Surface Laptop 3), and Intel would power, well everything else. What we missed was Intel’s Lakefield, the compact, stacked-chip architecture which we already knew would be the foundation of dual-screen displays. That, of course, became the Surface Neo, Microsoft’s dual-screen device.

You don’t use chips, though. You use devices. What those four different chip platforms enable—and not just for Microsoft, but for every other PC maker too—is the ability to design in different computing modalities for different people, something we’ve seen Microsoft strive for in the past.

Modalities—the different ways in which users interact with Windows and other Microsoft services—is Microsoft’s stock in trade. Some people prefer a desktop. Others, a traditional clamshell laptop. Tablets appeal to others. Microsoft tried and failed to make Windows Phones a thing, but ultimately decided to use apps and services as a proxy to push users back within the Microsoft fold.

But those are hardware. While the PC space has wrestled with form factor, Microsoft has quietly evolved Windows beyond a mouse-and-keyboard-driven interface into one that can be interacted with via voice, touch, ink, holograms, a game controller, and even your eyes. Microsoft designed some of these—eye tracking, for example—as “assistive” technologies for the disabled. But we all benefit. These different Windows modalities are Microsoft’s stock in trade.

Why? Because people work in different ways. Microsoft provides a command line not just for coders, but for users who appreciate fine-grained control over their operating system. Why do people become so irritated with new Windows feature updates? Well, there are the inopportune update times, but once an update breaks the way in which a user goes about their day, it becomes a source of frustration. It breaks the “flow” that Microsoft’s chief Panos Panay so often talks about.

This brings us back to the Surface Neo, and to some extent, the Surface Duo as well. Two-in-1s have evolved beyond clamshells, providing alternative ways of viewing and interacting with information: tent mode, for example. Dual screens are the evolutionary next step, even if—and this is important—even if they’re not for everyone.

In the old days, when Apple first introduced the iPad, reporters who used it to take notes were offered the front rows in Apple’s small Infinite Loop auditorium. This was peak Apple: offering pride of place to those who saw the world (or were willing to) as they did. I remember happily sitting behind them, content to use a real keyboard.

Being forced to use a particular modality to interact with your PC is simply misguided, and it will turn people off. I have absolutely no desire to type on glass, because it would be like jogging in bare feet. Personally, I prefer a Surface Book 2, which offers a lot more give in its keyboard than other laptops do.

The culmination of all of this is the Microsoft Surface Neo, which provoked a “whoa” from me when I saw the keyboard. What impressed me wasn’t just Microsoft’s willingness to bridge the gap between those who prefer a “real” keyboard and those who type on glass. It was the way in which Microsoft carefully integrated the keyboard into the device itself: accommodating the reduced screen real estate that the keyboard covered up, for example, by creating the Wonderbar. (I still wonder about what content will fit itself naturally into that space, however.)

This is flexibility. This is what Microsoft understands.

About the only criticism I can come up with is that Microsoft probably should have reversed the Surface Duo and Neo brands. The dual-screen laptop feels much more like a “Duo,” and the slick, Android powered dual-display phone (that apparently works, unlike the Galaxy Fold) feels like much more of a “Neo”-like innovation. We won’t know more until we’re able to see the products–in about a year, we hope.

Quite clearly, the launch of the Surface Pro X, Surface Laptop 3, Surface Pro 7, as well the Neo and Duo represented Microsoft’s best Surface launch ever. And it wasn’t just the products themselves, but what their variety represented: the culmination of everything Microsoft has tried to achieve with Surface. Will the Neo and Duo succeed? Not for everyone. And that’s the point.