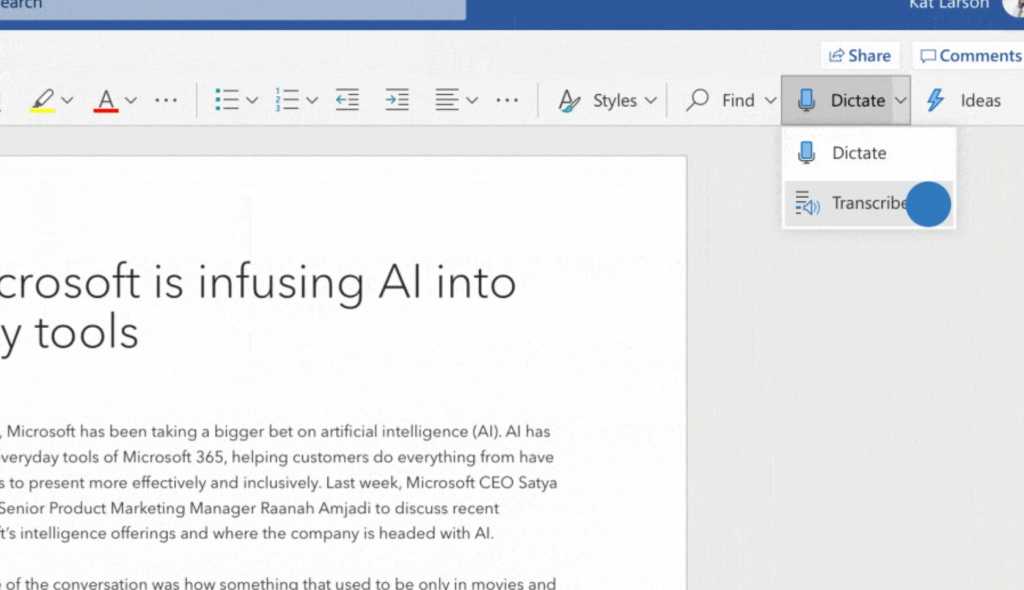 The dictation service within Microsoft Word is lousy. At long last, that looks like it’s about to change.

In 2017, we complained that dictation within Windows was awful, specifically because it worked upon a local model that individual users had to train. Now, Microsoft says it’s preparing to bring its far, far superior cloud dictation service to Microsoft Word, beginning in 2020. And it’s bringing transcription to Word, too.

Open Word, tap the mic button in the upper right, and you can see what we mean: Unless you’ve specifically trained the model and speak clearly, Windows can only recognize a majority of your words. Unfortunately, a “majority” isn’t good enough, as you’ll often have to dive in and edit, interrupting your workflow.

On the other hand, if you’ve ever used Cortana—or another cloud service, such as Google Assistant or Amazon Alexa—the recognition accuracy is significantly improved. Any time Microsoft shows off its cloud-powered transcription services, such as at this Build demo, it’s amazing. It’s that advanced level of accuracy Microsoft is bringing to Word for the web, beginning in 2020.

Microsoft says it will use OneDrive and the Azure Speech Services to securely store your audio files, implying that the service will be tied to Office 365 or the corporate version, Microsoft 365. It also won’t be free, apparently: “Audio transcription in Word will be available in early 2020 in Word for the web, with integration into the Word desktop and mobile apps following in the spring. Exact plans and pricing will be announced closer to general availability,” Microsoft says.

You’ll be able to upload recorded audio and Word will transcribe it, separating it by speaker. Microsoft said in a blog post that this transcription will appear in a Word sidebar, where snippets of it or the whole thing can be brought into the main Word window to be edited. Interestingly, the demonstration GIF Microsoft uploaded shows this happening instantaneously, though other cloud transcription services require a bit of time for processing. It also appears that the transcription will be synced to the recording, as another Microsoft app, OneNote, does.

Otter, though, has until 2020 to perfect its service and rework, if necessary, its pricing options. Microsoft may be late to cloud-powered dictation and transcription, but the convenience, immediacy and corporate clout of Office will make it a formidable competitor.