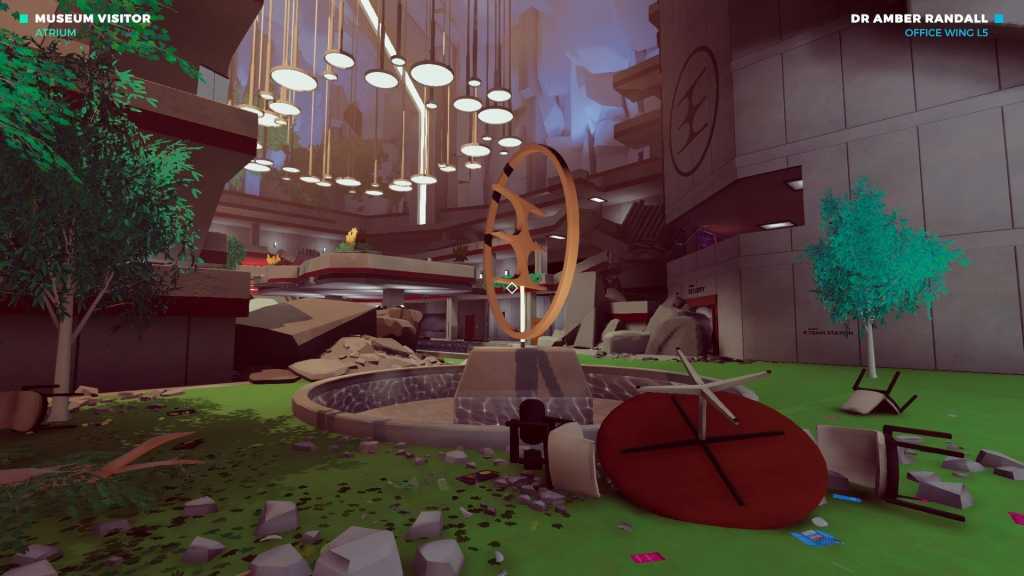 The Bradwell Conspiracy has a neat puzzle hook and a strong sense of place, but strict square-peg-square-hole limitations put a damper on the player’s creativity and problem-solving.

Remember when every puzzle game wanted to be Portal? We’re a few years on from that trend now, but every now and then it resurfaces.

Sometimes the connection is a little more distant, like The Talos Principle. Other times it’s practically hitting you in the face. Shady tech corporation? Snarky sense of humor? And always, the puzzle gimmick, the underlying foundation and ostensibly the raison d’etre.

Problem is, very few of these puzzle mechanics are ever as fresh or as malleable as Portal’s portals. Such is the case with The Bradwell Conspiracy, an adventure that starts strong but runs out of ideas too early.

“Starts strong” is never the sentiment you want to come away with, but rarely does it ring as true as The Bradwell Conspiracy. The setup is fantastic. You awake in the ruins of the Stonehenge Museum, minutes after it was rocked by a mysterious explosion. Alarms blaring, you’re nevertheless guided to an exit by a calm British voice—the Museum Guide, an AI companion embedded in a pair of smartglasses. He also informs you that you can’t speak, due to smoke inhalation. Heh, clever.

In mere minutes The Bradwell Conspiracy conveys so much about the world it’s building, a near-future 2026 wherein the proposed Stonehenge Tunnel almost caused the collapse of the famed monument, and the titular Bradwell Foundation generously stepped in to firm up the site. Of course, the Bradwell Foundation also built a massive underground research laboratory as well.

Your exit from the collapsing museum doesn’t go off quite as planned, and you’re plunged into these subterranean depths. There, you’re introduced to the Substance Mobile Printer or SMP, your puzzle-gun for the remainder of the game.

And even this starts off strong. The SMP can ingest items from the environment and then “print” them back out again. The first example is a massive key, the “Key to Determination,” which you print into the lock on the “Gateway to Your Potential” as part of Bradwell’s hilariously stilted employee induction process.

I said up top that few puzzle mechanics are as malleable as Portal ‘s portals. That description isn’t completely accurate in the case of The Bradwell Conspiracy though. There’s a lot of potential here.

There are also plenty of ways the player could abuse the SMP’s powers though. Thus paradoxically, The Bradwell Conspiracy is at its best in this early tutorial area. Sure, the puzzles are simple, but they’re that way by design, choreographed and constrained in order to introduce a new Bradwell employee (and the player) to the SMP’s functions.

You’re left to imagine, for a few minutes at least, what you could do with the SMP later on. Create a mountain of trash cans to reach a high platform? Assemble a Grecian statue from various mannequin parts to open a secret door? Or the reverse, ingest a bookcase to reveal the door behind?

I’m not saying these are excellent ideas, or that The Bradwell Conspiracy should’ve used any of them. Nor do I want to imply that the developers didn’t think of many of these. I’m sure a lot of concepts were bandied around and discarded, either for time or money or because they simply didn’t play well.

But in any case, The Bradwell Conspiracy is far more repetitive than its earliest moments imply. Exiting the tutorial, you immediately realize that only some of the Bradwell Foundation’s set dressing is ready for the SMP to ingest. The offices are full of briefcases and benches and computers and chairs and desks and all manner of items, but only a handful are interactive. Why? If there’s a reason, I couldn’t tell you.

The items you can ingest tend to be of limited use as well. There’s almost always a plank-like structure which you use to cross gaps. The rest of the items tend to be single-purpose—pipes for pipe puzzles, or tech components for specific machines. It’s more a case of “Square Peg, Square Hole” than the lateral thinking I expected from the introduction. Come to think of it, put-the-big-key-in-the-big-lock is pretty much the gist of it.

I don’t necessarily fault the developers for this choice. A sandbox where you could ingest or print any item in the game would be a much harder system to govern. But the current system is weirdly restrictive and doesn’t evolve much. It feels very much like when Portal 2 filled entire levels with walls you couldn’t put portals on. Like, isn’t that why we’re here? There’s an ambitious puzzle involving mirrors and lasers towards the end, the one time where it feels like The Bradwell Conspiracy gives the player a little bit of leash, and then it’s over.

The writing also unravels as it goes. The clever humor of the early hours gives way to a more serious tone later on, but it doesn’t really feel like the story or characters earn it. Most of the story’s “revelations” are squirreled away in emails and memos, which is always a bit of a crutch, and some of the audio logs needed a polish pass to clean up room tone and such.

The intrigue of the whole Stonehenge Museum concept doesn’t carry past the beginning either, and that’s a shame. What I wanted to do was learn more about the Bradwell Foundation and about this strange facility, but that’s in short supply.

And it’s not like this is a 40-hour game where the gimmick wears out its welcome by the end. That’s the most disappointing part of The Bradwell Conspiracy I think. I finished it in around three hours and even by that point I’d grown a bit tired of its tricks.

There are a few moments of brilliance here. Like Q.U.B.E., another much-maligned Portal spin-off with an underdeveloped core gimmick, I think a sequel could make good on a lot of The Bradwell Conspiracy’s ideas. It’s got an interesting world, and a creative puzzle mechanic hook that could be very interesting if expanded upon. I should mention I never got tired of looking at it either. The Bradwell Foundation’s Brutalist and Bauhaus influences are a gorgeous low-poly complement to what we saw in Control earlier this year, and I love the effort that went into the various posters and props.

But even those elements are mostly front-loaded. I rarely say “I wish this game were longer,” but in the case of The Bradwell Conspiracy I think it could’ve used probably twice as long to tell its story, and twice as many puzzles to take advantage of the SMP.