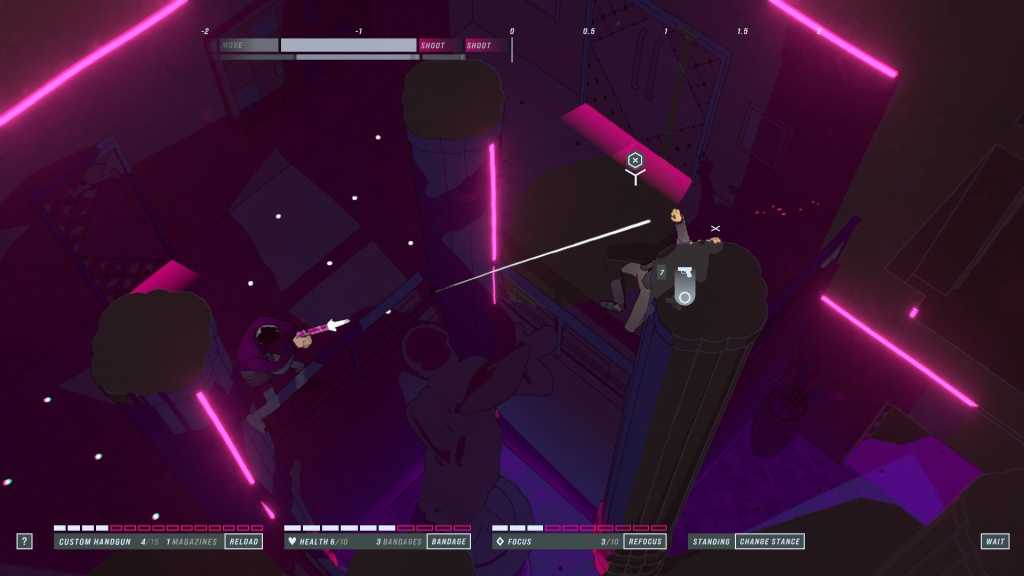 John Wick Hex is a satisfying strategy game that aptly captures the feel of the films in a way no true action game could, though the difficulty ramp-up might drive some away.

It always starts with one. One is manageable. One is easy even, if their back is turned. Walk up behind, that sort-of hunched at-the-ready walk, then slam them into the ground.

Then doors start opening, men rush out with guns drawn. You crouch, roll, fire off two shots. Don’t even stop to confirm he’s down. Throw your gun into the guy rounding the corner, punch him twice in the face. Steal his gun. Fire twice behind you. Another one down.

You certainly wouldn’t expect to get a strategy game—and yet that’s exactly what we got. John Wick Hex is a “timeline strategy game,” to use the developer’s invented terminology. A hybrid of real-time and turn-based, the timeline governs all in John Wick Hex. Every action takes a set amount of time. Walk one hex? Maybe a second. Pick up a gun? Two seconds. Bandage your wounds? Four.

Your enemies are ruled by their own timelines, of course. And given the nature of the system, their actions aren’t necessarily in sync with yours. As I said, one enemy is simple. Wick tends to act slightly faster than his opponents, so you can almost always handle a single foe. When John Wick Hex throws more enemies at you though, it starts to play out almost like a dance. Almost like the films, really.

For example, a simple scenario: You walk into a room and are confronted by two gunmen. Both take aim. Both will fire in a second or two. You pause and survey the scene. The simplest but riskiest maneuver is to shoot both. You can take down one enemy before he gets a shot off, but you’ll have to hope the other misses.

He has a greater chance of missing if you crouch though. Better yet, if there’s a table or a statue in between you might break line-of-sight and reset the more distant enemy’s timeline, letting you deal with each enemy one at a time.

But the best solution might not involve any shots at all. Throw your gun at the more distant foe and he’ll be momentarily stunned. Then use your fists to take down the closer enemy before he can get a shot off. Once he’s down, the remaining enemy will be much easier to close distance on and eliminate.

These sorts of calculations are at the heart of John Wick Hex, a lethal give-and-take that demands you handle an ever-increasing number of enemies with the same limited toolset. On the melee side, you can strike an enemy quickly, perform a longer takedown maneuver for more damage, or parry an incoming blow. Guns, you can shoot—or throw, in a pinch. You can crouch. You can bandage your wounds. And certain actions (like dodging) take “Focus,” so you’ll periodically want to Refocus and bring that number back up. If not, your aim will get steadily worse as well, and you may find yourself unable to parry in an emergency.

It’s pretty damn satisfying, when it works. John Wick Hex at its best can be played almost in real-time. It’s not, of course—but it induces the same sort of flow-state as fellow hitman simulator Hotline Miami, where you’re reacting almost purely on instinct. Wick’s moveset is limited enough that you’re never left poring over a long list of situation-specific reactions and wondering which applies best. Like all the best puzzle games, it’s very much a case of “Easy to understand, difficult to master.” I haven’t even come close to some of the more difficult challenges, like completing entire sequences without healing.

And there’s plenty more about John Wick Hex that deserves commending. The story, like Wick’s big-screen entries, isn’t very deep or ground-breaking. “Wick kills everyone who gets in his way” is essentially the plot. But for those interested in the lore of The Continental Hotel, the underlying world and black market politicking of the films, John Wick Hex drags some interesting details from the bottom of that dark well. Also, the interstitial scenes are fully voiced by Ian McShane and Lance Reddick, who do a fantastic job.

The art is a treat as well. Again, you’d expect a John Wick adaptation to do gritty realism. Instead, Hex takes inspiration from the films’ more colorful setpieces. It reminds me of Wolf Among Us, which is never bad company to be in. “Graphic noir,” the developers call it. Everything is essentially a neon-drenched club here—even when it’s a cargo ship, or an art installation. Does it make sense? No, but it looks fantastic.

My only complaint—if you can call it a complaint—is that the difficulty ramps up fast. And it’s a very particular type of difficulty: Throw more enemies at Wick.

That’s not out-of-line with the films, nor with aforementioned games like Hotline Miami. But I had more fun in the early stages, when encounters tended to be Wick versus two or three different foes. In those situations, it feels like you have a lot of approaches open to you, a lot of flexibility.

Later you’ll occasionally open a door and find five or more enemies all gunning for you. Some scenarios even (as far as I can tell) spawn enemies in on a timer forever. Take one down and another rushes in to take his place.

Not only does it slow down the pace and make the timeline harder to read, it also ends up feeling more artificial. Instead of playing around with my options, I often found myself resorting to cheesing the AI—manipulating them, forcing them to chase me in circles around a wall, or crouching and standing and crouching and standing like some sort of hitman jack-in-the-box.

Valid? Sure. Anything is valid as long as Wick survives. But it feels a bit like a cheat—both on your part and the game’s.

And towards the end, when scenarios get longer, it becomes easy to back yourself into a corner. John Wick Hex is a series of setting-specific chapters, each made up of around six or seven levels. There’s a nightclub, a dock, an art gallery, and so forth. Progress carries over between levels in a chapter, as you’d expect. End a level with two bullets in your gun and you’ll start the next that way as well.

And this leads to some really great moments. In the cargo ship scenario for instance, I found myself in the final level with three health and no bandages. Two shots and I’d be dead. It took a few tries but I managed to squeeze through, taking down the boss without ever getting shot.

Hell, it’s probably possible to complete every level without getting shot.

But the reality of it? Making your way through John Wick Hex for the first time, you’re going to take damage. Enemies are going to surprise you. Fights are going to spiral out of your control. And since progress carries through, it’s very easy to find yourself heading into the final confrontation outmanned and under-provisioned.

In the case of the cargo ship I eventually managed to make it through, but I can see someone getting frustrated—and then what? Start over. That’s your only option. Run the whole scenario again and hope you make it back to the end in a better position.

It’s not especially cruel or even unreasonable, but I’ve definitely banged my head against levels just to avoid starting from scratch again. The annoyance is occasionally compounded as well by some XCOM-style nonsense, a 90% hit-chance that inexplicably misses, or committing to a move without realizing you’ll trigger more enemy spawns.

With no difficulty options, I could see some having a miserable time with the later levels—and by later, I mean, only two or three chapters into the game. John Wick Hex gets hard, and quickly.

Power through, and John Wick Hex can be incredibly satisfying though. That’s the flip side of the perennial difficulty argument. I’ve rarely felt more relieved than completing a segment of John Wick Hex on my last bullet and Wick’s last legs. But for a game that presents very friendly up front—especially one that might appeal to people who don’t usually play strategy games—the feeling of John Wick-as-Superman quickly falls away. You’re always mere seconds and one misstep from death.

Thematically appropriate? Maybe, but I did find it more fun early on when I was an unstoppable badass. Here, the devil feels all too human.

Still, I wish more tie-in games were executed with this level of craft, and with premises this creative. If they were, perhaps we’d see more of them—or at least more worth playing.