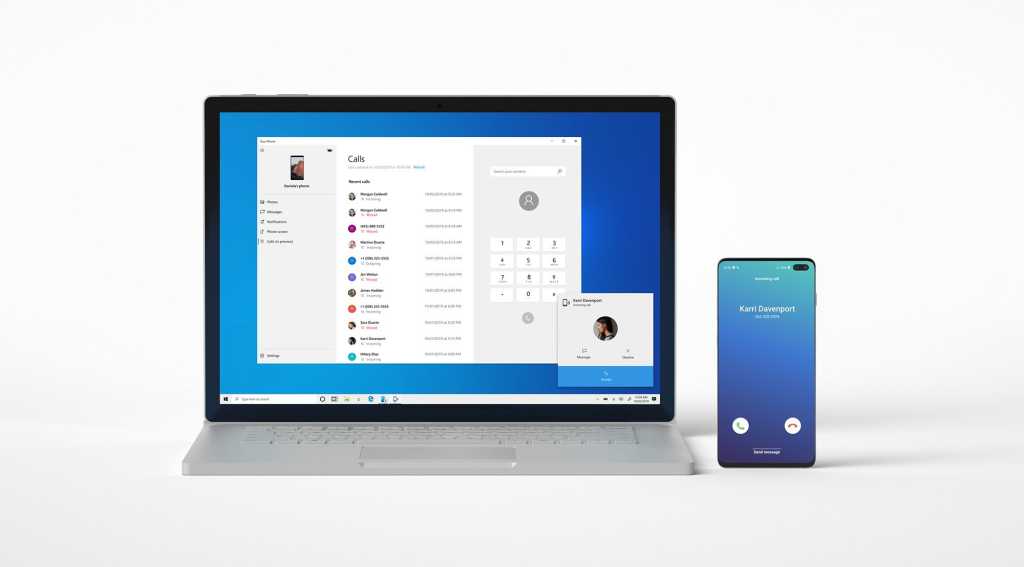 Microsoft has been showing off Your Phone’s ability to place and make calls, and now it’s finally arrived on a significant portion of Android phones and Windows 10 Insider PCs. Yes, you can leave your phone in your pocket.

Calls promises to do what its name implies: permit you to answer incoming calls from your PC, as well as initiate calls from your PC using either the dialer app or your existing contacts. Calls will be placed from your nearby Android phone, but you’ll be able to control your phone via Windows, as well as hear and talk to your caller via your PC’s mic and speakers.

You’ll be able to decline incoming calls and send them to voicemail, or respond with a text. A call history will also be available. (Note that this assumes your contacts are from your Windows People app, and not your Android contact list.)  Finally, you’ll be able to swap calls between your PC and the phone, and vice versa.

Microsoft rolled out the new capability as part of Windows 10 Insider build 18999, which is in turn part of the 20H1 or “Fast” ring of new updates. Microsoft’s deployment is a bit confusing: According to a blog post, the new Calls feature within Your Phone will roll out to those who have “19H2 builds or newer,” which include those in the separate Slow ring of 19H2 builds. Windows 10 19H2 is expected any day now, so it’s possible that Windows 10 users as a whole will see the new Calls feature before the month is out.

Telephony is already part of the Windows platform, of course, via Skype’s ability to place calls to landlines and cellular phones. There was the failed attempt at Windows phones, too. Once Windows Mobile went under, though, Microsoft slowly migrated its services onto Android, and to some extent iOS, while trying to bridge the two platforms. Calls is essentially the culmination of that effort.

What’s most welcome about the new Calls feature is the wide number of phones it now accepts. Previously, Your Phone was available to just a handful of devices: several Galaxy models, including the Fold; OnePlus and Pixel devices, and that’s about it. The Calls feature within Your Phone is available to all Android phones with Android 7.0 (Nougat) or higher, and on PCs that are equipped with Bluetooth. Right now, Microsoft is saying that PCs with Windows 10 build 18362.356 and above qualify for the new feature—the latest updates push Windows to version 18362.388. (Remember, though, that Microsoft is restricting the feature to Insiders for the time being.)

Still, with texts, notifications, calls, and more rolling out to Your Phone, the Your Phone app is nearing the end of its journey. We still don’t know how Calls will work in practice—for example, if you have more than one Windows PC in your workspace, will it ring on all of them? This is probably one of the issues that Insiders will have to work out before Your Phone’s Calls feature goes live to everyone.