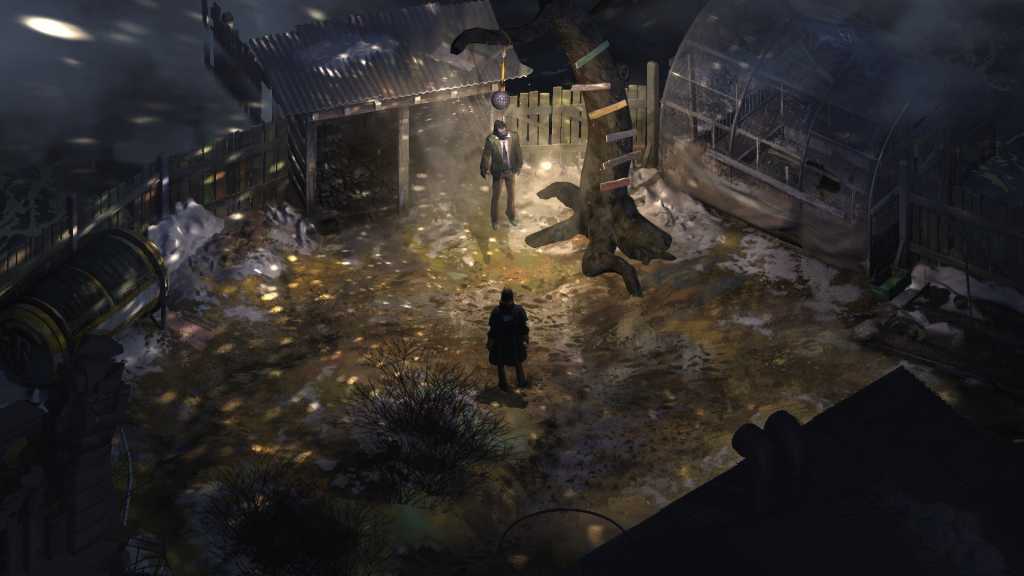 There has been a murder. Last week a man was hanged behind the Whirling-In-Rags hostel (and cafeteria). I know who did it, but I need to confirm why they did it, so I head to the docks to ask some questions.

Or at least that was my intention. Instead I find myself embroiled in a spirited debate about the merits of communism, about how I’m destined to foment a worker’s uprising one overlong hug at a time—or maybe I’m not. Also, I’m having this philosophical debate with myself, or maybe it’s with my possibly sentient necktie.

My partner looks on in concern. Of course, he can’t know how bad things really are. He knows I’ve lost my badge and my gun, sure—but he doesn’t know I’ve lost my entire memory, can’t even remember my own name.

Given the circumstances, the hanged man might be the easiest problem to solve.

I’m so very far from finished with Disco Elysium. According to the developers this detective adventure is between 60 and 90 hours long and I’ve played for ten. Ten-ish. Per usual when we’re only partway through a game, consider this an incomplete verdict.

That said, I’m loving it.

There’s a prosaic quality to Disco Elysium that makes every sentence—and there are a lot of them—a joy to read. Such a range of styles, too. At times it winds in and out of reality like a psychotropic haze, reminiscent of Ken Kesey in a fever dream. In other moments, it’s blunt and dry as an encyclopedia entry, albeit an encyclopedia full of nothing but useless trivia.

Ostensibly all this writing is in service of solving a murder mystery. Anything you do besides wander the map is handled in text, be it questioning a witness or performing an autopsy or trying to jump off a roof.

Or doing drugs, or punching a child, or selling your clothes to a pawn shop and running around in your underwear. In reality, very little of Disco Elysium pertains to the matter at hand. Even the most banal conversations have a tendency to derail, your amnesiac brain inviting every tangential thought to be spoken aloud. Begging you to speak them aloud, really. Sure, you could simply ignore the impulse, pretend you definitely don’t want to talk at length about karaoke or “eternite” roofing slats or the migration patterns of the Great Skua…but where’s the fun in that?

You never know what’s coming, except that it’s going to be good. Hilarious even, at times. Disco Elysium has a knack for making failure funny, which is key because you’re going to fail at being a detective a lot. And why not, right? You can’t even remember your own damn name.

You aren’t completely inept though. Quite the contrary. Your detective is governed by four attributes—Intellect, Psyche, Physique, and Motorics—which in turn decide how high he can raise pertinent skills. Put a lot of points into Intellect for instance and you’ll both start with an aptitude for logic and ensure you can raise it to the highest heights later. Put a single point into Physique, and you’ll never be very threatening. It just won’t happen.

It’s a cumbersome system to explain, and a daunting one to encounter at the start of Disco Elysium. Your first instinct may be to make a middle-of-the-road detective, a true Renaissance Man who’s kind-of good at logic, kind of empathetic, kind of strong, kind of dexterous.

Kind of boring. None of the default characters are even-keeled, and for good reason. The higher your aptitude for any skill, the more often you’ll encounter it in conversation. And I don’t just mean for skill checks, a.k.a. “I’m going to use this skill to solve this problem.” Those exist, and as I said you’re going to fail a lot of them because there are a lot of skills in Disco Elysium.

Skills also pepper the dialogue though. They trigger in the background, alerting you to information you might otherwise not know. For instance, I’m pretty skilled at detecting lies so my detective’s subconscious chimes in every now and then to say “Yes/No, this person definitely is/isn’t lying,” a fact I might be unsure of otherwise.

It’s a neat system because it’s additive. Disco Elysium doesn’t punish you, doesn’t tell you what you’ve missed or even make it obvious you’re missing out on other paths. I know I must be, and having replayed the beginning of the game a few times I can tell you there are a lot of branches you’ll leave unexplored.

But your choices weave in and out of the fabric of the story so seamlessly, coloring your experience without intimating that it could’ve gone another way. I get a lot of Intellect- and Psyche-based color, sidebars that tell me how best to adhere to police protocol, or when my flair for the dramatic might result in a more forthcoming witness, or simply tell me trivia related (but not useful) to the subject at hand. These in turn open up additional dialogue choices, branch upon branch upon branch.

At the same time, I don’t get many Physique-based tangents because I didn’t invest points in that attribute. I’m rarely threatening, not much good in a fight, can’t aim a gun. I know those trees must have just as many asides as the ivory tower life I’ve chosen, but I simply never see them. Two paths diverged in a forest, but I didn’t even know there were two paths.

It’s fascinating, and only getting more complicated the longer I spent with Disco Elysium. I already have a reputation as a “Sorry Cop,” a cop who quite literally says “I’m sorry” a lot because…well, I have a lot to apologize for. Still, I admit it doesn’t sound nearly as exciting as being an Apocalypse Cop.

The only thing I’m not fond of are the more traditional skill checks—and it’s not that I’m not fond of them, just more a problem with the implementation. Now and then you’ll encounter an actual skill check, like rolling Hand/Eye Coordination against your ability to shoot a small target.

The good news is Disco Elysium never straight-out tells you “No, you can’t do that.” Even the most far-fetched of skill checks—like, say, my anemic detective punching a bodybuilding racist—are usually presented as a 2% chance.

You can hit F5 to quicksave as often as you’d like though. Save-scumming is bad and wrong and we all know it, but it sure is damned hard to avoid caving to when you had a 46% chance of success only to see the fail-state pop up. As I said, Disco Elysium does a good job writing failure-as-entertainment, and at times failure can even help you out in the long run. But…well, that’s small consolation on certain occasions. I like having control over my save files, but sometimes I also enjoy the Telltale-style autosave approach and how it forces me to live with my bad decisions.

I also wish Disco Elysium were shorter, if only because I’d love to play through it as a completely different character on a completely different trajectory. Pick up a smoking habit! Tell everyone I lost my memory! Beat people up! I rarely get to replay games, especially ones that are 50-plus hours long. It’s hard to imagine seeing everything Disco Elysium has in store.

Maybe that’s a good thing though. After all, what I’m getting is mine—something Jon Ingold told me when I first demoed Heaven’s Vault, the idea being that you can only have such a unique and personal connection to a game if it’s also possible to miss out on other parts.

And hey, I have a loooooooong way to go in this first playthrough. That’s worth celebrating as well. I can’t wait to see what’s still in store. I think I might even find my gun soon. If I’m lucky.