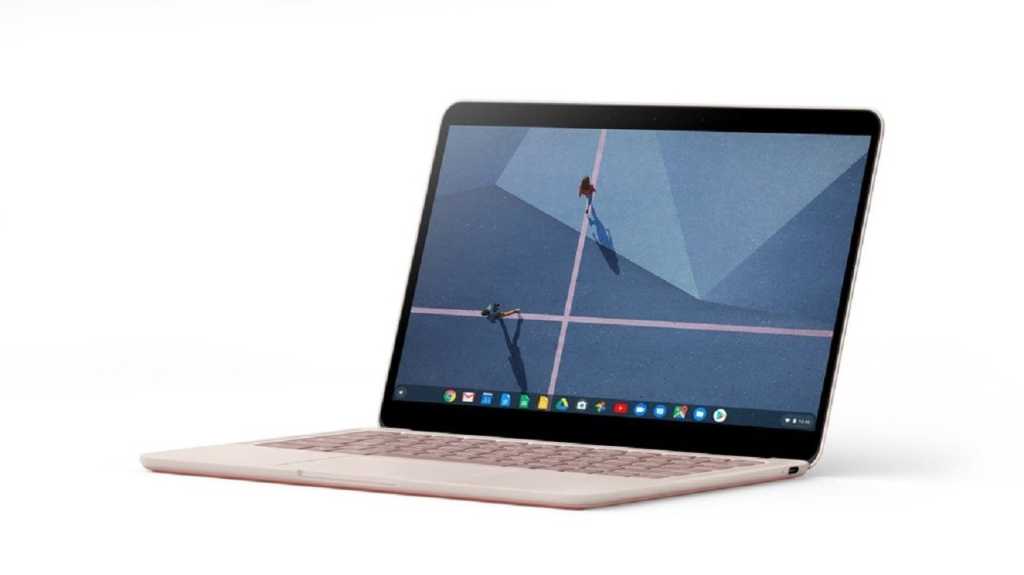 Google’s new Pixelbook Go answers the question of whether its next Chromebook would be a budget or premium device: It’s both. Priced at a somewhat moderate $649Remove non-product link, this clamshell Chromebook offers a 13.3-inch display up to 4K, with processor options all the way up to a Core i7. It maxes out at $1,399.

Recall that in 2017 Google launched the Google Pixelbook, a 360-degree notebook for nearly $1,000. A year later, it followed up with the Google Pixel Slate, a shift to a more traditional tablet merging Chrome OS and Android. Now the pendulum has swung back again to the Pixelbook Go, a definite return to the laptop form factor.

The most profound change to the Pixelbook Go is a ridged, grippy exterior, available in either “Just Black” or a new “Not Pink” color. Google has extended the color accents inside the Chromebook as well, so that the “pink” also pervades the chassis, palmrest, and keyboard.

Most Chromebooks are implicitly uncomplicated machines, though, and the Pixelbook Go is no different: expansion capabilities are handled by a pair of vanilla USB-C ports—no Thunderbolt, but that’s probably because Google encourages you to store your stuff in its cloud, not in an external hard drive. Internally, there’s a range of processor options, from a Core m5 all the way to a Core i7. It’s also about two pounds and 13mm thin. Naturally, it runs Chrome OS.

So that’s the top-line story. Now here are the five most important things you really need to know about the Chromebook Pixel Go:

Here are the available configurations:

Note that the latter two are listed on the Pixelbook Go’s product page as “coming soon”. Of the two, only the Core i5/16GB RAM is available for preorder at press time.

Google’s Chromebook Pixelbook Go ships in two color options: either Not Pink or Just Black. Both have a decidedly consumerish look to them, with a ridged back that’s far more akin to something you’d find on a device being marketed to kids, rather than one that could sell for well over $1,000. The thematic color extends throughout the magnesium chassis, though, which will also be tinged with pink or black, depending upon your color choice.

From a usability standpoint, the signature addition to this Chromebook is the Google Assistant key, found on the bottom row of the backlit keyboard next to the CTRL key. Though you can launch the Google Assistant hands-free, you can also tap the key to trigger the Assistant. By the way, the keyboard is promised to be quieter, with Hush Keys dampening sound.

Want a 4K display? You may have one. While the Pixel Slate offered a Microsoft Surface-like 3,000×2,000 screen, the Pixelbook Go offers up to a 4K display option—though just the forthcoming Core i7 model. All of the others ship with a 1080p display. Google is branding the 4K option as the “Molecular Display,” which it’s used previously with the Pixel Slate. While 4K options are usually rough on battery life, there’s no arguing that they’re a pleasure to behold.

With a variety of processor options from which to choose—from Intel’s Core to AMD’s mobile Ryzen to Qualcomm’s 8cx—which processor Google chose matters. You’ll have an option from Intel’s Core m5 all the way up to a powerful Core i7. (Google’s not revealing the actual product numbers, though they’re 8th-gen processors.)

A fast processor isn’t quite as necessary as it would be on a Windows machine or a Mac, given that the most demanding applications don’t appear on Chromebooks. But with a wide range of Android apps now available for Chrome OS, including Adobe Photoshop and Lightroom, the extra performance may come in handy for some.

The battery life is rated to be about 12 hours, according to Google, with quick-charging options that allow for two hours of battery life on just 20 minutes of charging. Interestingly, the battery life is the same for both the 4K and 1080p options—Google simply adjusted the battery size to suit. See our specs below for more details.

One thing we’re not seeing in the Pixelbook Go: LTE, either as an eSIM or as a slot for a physical SIM card. Instead, there’s just the standard Wi-Fi and Bluetooth connections.

Though the Pixelbook Go’s display is touch-enabled, the Pixelbook Pen has been omitted from the lineup, at least for now. Does this mean that e-ink is on the outs at Google?

Likewise, there’s no fingerprint reader. For a company that makes phones powered by either facial recognition or a fingerprint, the lack of LTE and biometric authentication is definitely a surprise. Instead, there’s a front-facing 2 Mpixel camera that doesn’t provide any biometric recognition capabilities.

Updated at 8:18 AM with additional details.