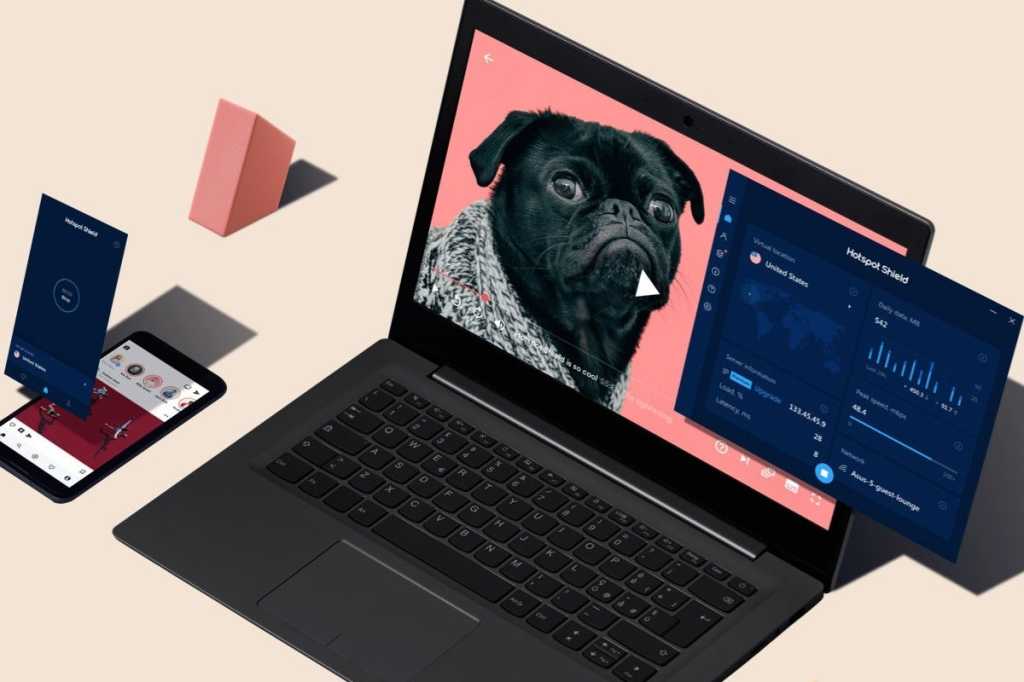 Pango
At a Glance

Hotspot Shield is a high-quality VPN with the fastest speeds around bar none. It also has a great desktop app, 85 country choices, and a network of nearly 2,000 servers. We don’t like the privacy policy, because the VPN still logs a lot of information. The company says this data is not tied to your personal activity, but this is still not the VPN that privacy-conscious users are looking for.

What a difference nearly two years makes. We last looked at Hotspot Shield in early 2018, and now at the end of 2019 there are some serious changes. Hotspot Shield is now owned by a new parent company called Pango, which offers a subscription security bundle that includes Hotspot Shield, 1Password, Identity Guard, and Robo Shield for $13 per month. You can still get a standalone Hotspot Shield subscription, however.

Along with the managerial changes the Hotspot Shield privacy policy has been tweaked, the desktop app had an overhaul, and the overall product has more servers, more country options, and new pricing.

When you start Hotspot Shield it shows the now-familiar dark blue background with a giant power button in the center of the window. The app window is smaller now, and the default screen includes two tiles below the power button. One is for choosing your location, and the other displays your cumulative data usage.

The big button used to be the only thing on the default start page. Adding the Hotspot Shield country list is a nice change, allowing you to pick from all 82 countries.

That country count is quite a step from the measly 25 that Hotspot Shield had last time around; however, Pango says some of its country locations use virtual servers, where the physical server isn’t actually in the country it claims to be. Currently HSS uses physical servers in 22 countries: the United States, United Kingdom, Australia, Canada, France, Germany, Hong Kong, India, Ireland, Israel, Italy, Japan, Netherlands, Russia, Singapore, South Korea, South Africa, Spain, Sweden, Switzerland, Taiwan and Ukraine.

The new Hotspot Shield has a dedicated page showing your currently selected country, a quick-access section, and then a listing of all countries.

On the left side of the app are a number of menu items in a very slim left rail. Click the “hamburger” menu icon to reveal the names of each menu item.

The menu hasn’t changed too much. The primary options users will need on a regular basis include the default Home section, as well as Settings. The Help section also has quick links to real-time chat support, and trouble ticketing for premium users.

The settings area has a few new items. There’s now an internet kill switch, which we didn’t see last time around. This feature stops all web traffic if the VPN connection crashes until you reconnect to the VPN. There’s also a “web domain bypass,” which lets you visit some websites outside of the VPN connection. As with last time, I could get Hotspot Shield to work with Netflix (allowing me to view overseas Netflix catalogs), and Hotspot Shield says support for U.S. Netflix is now an official feature. That’s great news for travelers or people who often watch Netflix on public Wi-Fi hotspots.

Once you’ve got the VPN up and running the display is very similar to what we saw before, just in a more compressed format. The app displays small informational tiles that show your VPN location, the VPN IP address you’re using, and the amount of bandwidth you’ve used going up and down, plus the name of the local network you’re currently on. These tiles have some nice new changes. The server information tile, for example, shows your IP address, the load of the server (as a percentage), and the current latency. The data tile shows how much data is going up and down, and now displays that on a graph. Finally, there’s a new peak-speed tile showing exactly that.

Hotspot Shield is a lot more expensive than it was. Last time we looked it was $72 per year, which was already high, but now it’s pushing close to $100 per year, at $95.88. There’s also a two-year plan at $167.76 and a month-to-month plant at $13. Hotspot Shield allows up to five simultaneous connections per account.

Just like last time around, Hotspot Shield is fast. In our tests, the VPN retained more than 72 percent of the base download speed, averaged over three days of testing. That’s much faster than the 64 percent we saw last time, but there was one day with an unusually high result that may have skewed the results.

Regardless, Hotspot Shield is still fast enough to remain our pick for fastest VPN speed, with other well-known VPN services such as ExpressVPN and Mullvad coming in way behind.

As usual, remember that speed tests can vary quite a lot, and your mileage may vary depending on your ISP’s speeds, router, PC, and other equipment.

As with former Hotspot Shield owner AnchorFree, Pango’s headquarters are in Redwood City, California. The CEO is Sujay Jaswa and the COO is Tony Huie.

Hotspot Shield still requires an email address and password to sign up. That’s not terrible and fairly standard for VPNs. Payments are also standard, as before, requiring a credit or debit card, or PayPal. There are no options for cryptocurrencies or cash.

The privacy policy has improved, but it’s still not as good as other services. Pango does not collect device information (though it does this for other products), but it still collects the domains you visit. Not the specific URLs, mind you, just the domains. AnchorFree says these domain visits are never connected to your account and cannot be tied to you. “We do not know which user accessed which domain…We do this to monitor, support and optimize our VPN services,” according to the Pango VPN privacy policy.

In addition to the domains, Hotspot Shield also creates a hash based on your device attributes and uses that to measure bandwidth use, provide support, analytics, and so on. Pango says it uses a hash because it does not “require users to register an account to use some of our products and need a way to distinguish between different users and carry out the activities above.” Your IP address is also kept (in an encrypted state) during your VPN session and then deleted. Finally, the company also collects the duration of your sessions and bandwidth consumption. Pango says it does this “to monitor, support and optimize our VPN services, as well as enforce free app usage limits.”

Pango’s privacy policy is probably fine if your only interested in securing your connection for those times you’re on public Wi-Fi connections. If, however, your primary concern is privacy or gaining as much anonymity as you can realistically get online, there are other VPN services that log far less data.

It’s hard to argue with those speed results, however. If your only concern is getting the fastest VPN possible then you should test Hotspot Shield for yourself.

*Hotspot Shield uses virtual server locations where the physical server behaves as if it’s in one country but is actually in another.