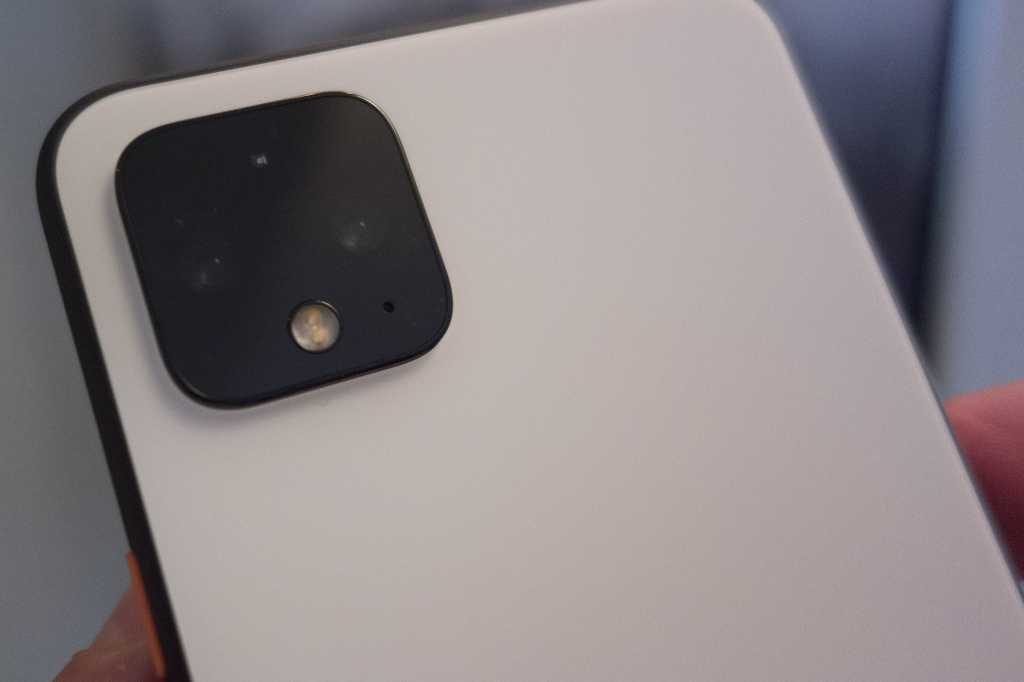 After months of leaks, I thought I had a pretty good idea of what the Pixel 4 would look like when I picked one up for the first time, but I was pleasantly surprised. Yes, the bezels are huge, the forehead and chin are terribly asymmetrical, and the camera square isn’t nearly as pleasing as the iPhone 11’s. But the design of the Pixel 4 isn’t quite the eyesore I expected it to be.

And, besides, the Pixel 4 isn’t trying to sell you on its looks. Not once during its hour-long presentation did Google talk about precision milling or diamond chamfering. Google wants you to choose to buy a Pixel 4 on the strength of its features, not its outward appearance.

To the end, the Pixel 4 does feel really nice to hold. It’s a touch thicker than the Pixel 3 (8.2mm vs. 7.9mm) and heavier (193 grams vs 183 grams), and the difference is palpable. It’s not that it feels chunky—no, it feels more solid and substantial.

The matte back—which extends all the way to the top now, eliminating the trademark two-tone look—feels more like metal than glass, and the aluminum sides are polished to give them the same texture. The black sides also serve to give the rear colors some pop, and this gives the standard white color a whole new dimension. This year’s new “limited” orange color is very Halloweeny, and I wonder if Google will keep selling it after this month.

The Pixel 4 XL’s Quad HD display already received an A+ rating from DisplayMate, which notes that it has 10 percent higher peak brightness, much higher absolute color accuracy, and improved display power efficiency than the Pixel 3 XL. That wasn’t noticeable to my eyes, and the Pixel 4 XL’s screen still looked duller than the iPhone 11 display, and doesn’t feel as vibrant as the display on the Galaxy Note 10+.

The front of the phone probably has more bezel than the iPhone 11 Pro Max, Galaxy Note 10+, and OnePlus 7T put together, but part of me commends Google for choosing function over form. Even though it doesn’t have a second selfie cam like the Pixel 3 (but you can still take group selfies), the Pixel 4 packs a ton of tech into its forehead, including an IR camera, dot projector and flood illuminator for Face ID-style 3D facial recognition. It’s a first for a U.S. Android phone, and it’s easily the Pixel 4’s coolest new feature.

Face ID finally has a challenger

Face unlock isn’t a new feature for Android phones, but most handsets rely on a 2D image from the front camera, which isn’t secure or recommended as a first line of security. The Pixel 4’s system creates a 3D map of your face that’s stored inside the phone’s Titan M Security Chip so it can be used for purchases and authentication beyond unlocking.

Like the iPhone 11, you won’t find another biometric authentication method on the Pixel 4. That’s because Google has nailed Face unlock. After the initial set-up, which takes about 30 seconds of head rotating, you’ll able to choose whether you want to skip the lock screen when raising your phone to unlock. It’s makes the system feel that much faster than the iPhone 11, and makes the Pixel 4 feel like it’s a true extension of your body.

One quibble, however: Google warns that someone may be able to unlock your phone by holding it up to your face, even if your eyes are closed. That’s because the screen attention feature is only used for preventing your phone’s screen from turning off when you’re looking at it, and not for an extra level of face unlock security. There also doesn’t seem to be a quick way to disable it in the event of an emergency. That makes Face unlock feel less private and secure than Face ID, especially when dealing with police and government seizures.

All in all, however, it’s a great addition to Android, and I hope Samsung and others follow their lead. Google took something of a stand with the Pixel 4 feature-first design, and now it’s up to the rest of the phone manufacturers to figure out how to work it into their own designs.

Also crammed into that top bezel is a radar chip for detecting movement. Integral to a feature called Motion Sense, it lets you control your phone without touching it, not unlike the LG G8’s Air Motion. Except it actually works here.

Granted, the uses are extremely limited—both in practice and scope—but Motion Sense really does work. Swipe above your phone’s screen and an alarm will snooze for 10 minutes. Swipe left or right when music is playing and you’ll skip to the next track. And if a loud phone call comes in when you’re in a quiet room you can swipe to silence it.

I tried them all, and they all worked without a hitch. The fact that Google has built a touches gesture system into a phone that works the first time (and every time) is impressive, but now the challenge is to make it useful. Snoozing alarms and silencing timers is fine, but Motion Sense has far greater promise than those simple uses.

The Pixel 4’s camera, like always, is its marquee feature. For the first time, you get two lenses, a wide and a 2X telephoto, but even with twice as many lenses, the Pixel 4’s camera is more of a refinement than a revolution. There aren’t any major new features to speak of, and even the lauded astral photography capabilities are really just an enhancement of Night Sight to let you shoot pictures of stars.

The telephoto lens will help with high-res zoom (obviously) and portraits won’t have to rely solely on computational AI tricks. I snapped a couple of samples, however, and I wasn’t able to tell much of a difference between Pixel 4 and Pixel 3 images, which is more of a testament to Google’s awesome AI wizardry than a criticism.

The most useful new feature is Dual Exposure control, which adds a second adjustment slider when you tap the screen to up the brightness. Now you can lighten both the scene and the shadows to create some cool effects and capture tricky shots without blowing out parts of the photo. And thanks to Live HDR, you’ll finally be able to see what your shot will look like in real time.

But for a phone that prides itself on being ahead of the curve, the Pixel 4 doesn’t seem to be a giant leap over the Pixel 3. I’ll have to run more tests on it, but my initial impression is that it’s as good as the Pixel 3 but not the kind of massive boost people were hoping for.

Something’s missing in the box

The Pixel 4 still doesn’t have a headphone jack, but Google made the decision to not include a pair of USB-C Pixel Buds in the box this year. That means you’re expected to shell out some extra dough for a pair of headphones, despite the phones’ $799 and $899 price tags.

That’s not cool. Apple and Samsung each include a pair of headphones with their phones, and the lack of one makes it seem like Google is needlessly nickel and diming its customers. There’s not even a USB-C-to-3.5mm dongle in the box. Maybe Google expects everyone to run out and buy a pair of second-gen $179 Pixel Buds when they release next spring, but I suspect many a Pixel buyer will be in for a rude awakening when they unbox their phone.

But that might be forgiven once they turn it on. The Pixel might not be a looker, but it’s definitely has beauty on the inside.