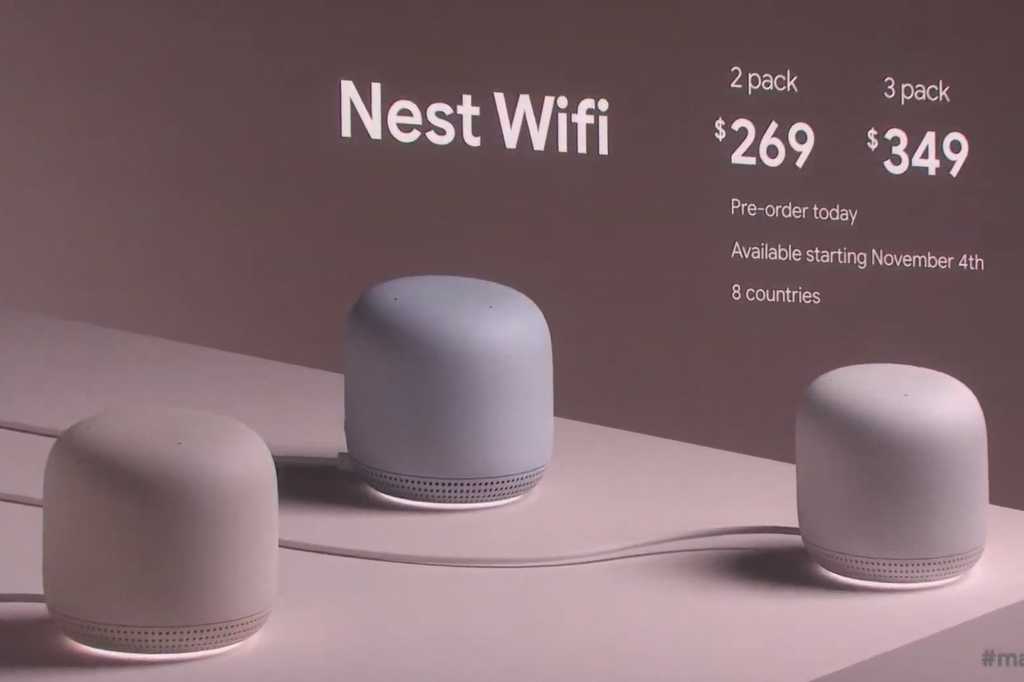 It’s been a long three years since Google introduced its Google Wifi mesh router. After a messy reorganization in which Nest lost its semi-autonomy to become Google’s smart home brand, the company introduced the new Nest Wifi at its Made by Google event in New York on Tuesday.

Google Nest VP and general manager Rishi Chandra didn’t specifically describe the Nest Wifi as a mesh router, but he did say the system would consist of a router that plugs into your broadband modem or gateway, and a satellite he called Point. According to Chandra, a Nest Wifi router and a single Point should be sufficient to cover 85 percent of households. According to this page on the Google Store, the Nest Wi follows the IEEE 802.11s standard for mesh networking, so I presume it’s an 802.11ac router.

By effectively building a Nest Mini smart speaker into the Point, Google gains a key advantage over Amazon and its Echo line of smart speakers. Every Point you deploy not only extends the reach of your Wi-Fi network, it also gives you a smart speaker in that room.

Nest Wifi will have Bluetooth Low Energy and Thread radios onboard, although the Thread radio is not currently active. (Thread is an Internet of Things protocol that Nest has been working on for several years.) The Thread Group, a coalition of smart home device manufacturers that includes Nest, Big Ass Fans, Jasco, Yale Security, and a number of other companies, is working on Zigbee interoperability. But many of Amazon’s smart speakers have Zigbee radios today and therefore provide broader support for existing smart home devices.

Chandra made a point of informing the audience that hiding your router in a closet can reduce its coverage by up to 50 percent, and that the Nest Wifi’s attractive industrial design would encourage people to place the router out in the open, but the primary reason people put their routers in closets or at the edges of their homes isn’t because they’re ugly, it’s because that’s where their broadband connection comes into the home.

The Nest Wifi router is white, but the point satellites will be available in three colors: white , blue, or coral. The router will cost $169, with a single Point for $269, and with two Points for $349. Additional Points will cost $149 each. Google is taking pre-orders now and expects to ship the system to eight countries on November 4.

We’ll update this story as additional details about the Nest Mini become available.