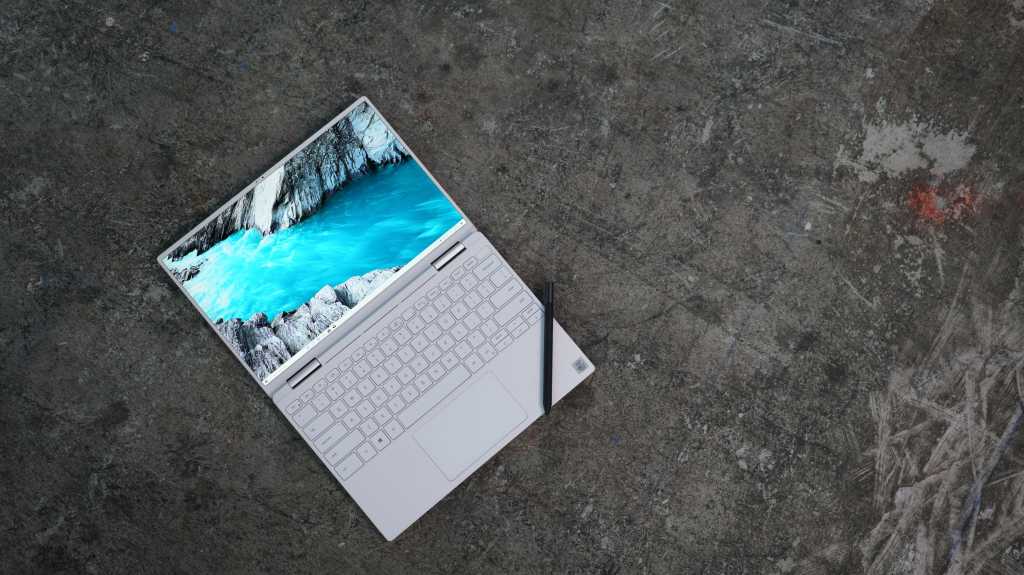 Dell’s XPS 13 2-in-1 features top notch performance, a tiny foot print and pleasant aspect ratio outweigh the negatives of not having a USB Type A and a permanent SSD.

Call the Dell XPS 13 2-in-1 the triple threat. It offers awesome performance in an amazingly tiny package (and it’s convertible, too). It’s also one of the first laptops to sport Intel’s new 10th-gen Ice Lake Core i7-1065G7, based on a new 10nm process technology.

The XPS 13 2-in-1 also has a few features that are likely to steam up some fans. That potential drama aside, this laptop is just about perfect.

We’ll start by laying out the major specs for the XPS 13 2-in-1, including:

On the spec list, there are four good things and two controversial things we want to point out. Obviously the new CPU is goodness, but we think the Intel Iris Plus graphics deserves a shout-out too. We know from our performance preview of Intel Ice Lake it’s a big step up over standard UHD graphics.

The RAM is also worth noting. LPDDR4X memory has been around for about four years now (at least the non-X version), but it’s just finally making its way into PC laptops thanks to Intel’s newest CPU, which supports it. LPDDR4X basically means higher clock speeds, larger memory modules, and lower power consumption.

Finally, the panel Dell used is to be applauded as well. PC laptops have long been peer-pressured into a universal 16:9 aspect ratio. That’s great for videos, but for actual work, where taller screens are preferred, it’s atrocious. Apple’s MacBook use 16:10, and Microsoft’s 3:2 on the Surface line is just about perfect barring the unlikely return of retro 4:3 square monitors. The XPS 13 2-in-1’s 16:10 isn’t 3:2, but that slightly taller aspect ratio gives you slightly more usable screen area.

On the negative side, we’ll point out the port arrangements. There are two Thunderbolt 3 ports and a headphone jack. Missing is the all-important square USB Type-A. Dell continues to say it couldn’t do it without making the laptop thicker.

The last point that’s triggered some is the use of soldered storage. The XPS 13 2-in-1 we saw features a 512GB Toshiba BG4 SSD soldered directly on the motherboard. Why? Dell officials have told PCWorld it’s for space and z-height restraints. Yes, others have jammed M.2 removable drives into insanely thin laptops, but Dell sticks to its guns and says every square millimeter counts when you’re trying to jam hardware into a tiny laptop—and make it fast, too.

To be fair, while PC enthusiasts love their upgrade paths, very few users actually upgrade their laptop drives. Just make sure when you buy that laptop to get an SSD capacity that will last a while.

With the redesigned XPS 13 2-in-1, Dell shrinks down the “MagLev” keyboard. First used on its XPS 13 2-in-1 two years ago, it uses magnets to repel the keys back up once they’ve been depressed.  The 2nd-gen keyboard is quieter, “softer,” and about 25 percent thinner than a traditional laptop keyboard. It’s also, frankly, like a MacBook keyboard in its limited travel and feel.

Is it bad? No, but for folks who are revolted by low- to no-travel keyboards, this won’t please you. We will say—in typing tests against the traditional XPS 13 9380 and the HP Spectre x360 13t (2019), our typing speed was about the same on all three. Any perceptions that this keyboard doesn’t “feel” right may be purely subjective.

The keyboard features a full-pad finger print reader in a rectangular spot above the backspace key. The reader is the size of a key and in a bit of an odd location, as you may occasionally press it while fat-fingering for either the backspace or the delete key.

The trackpad is glass, with a very light matte feel. Its proportions are correct, and it supports Microsoft’s Precision Touchpad requirements. Basically, it’s a good trackpad.

Laptop form factors are a very individual choice. I’ve gone through a Surface phase, where I thought Microsoft’s tablet-first, laptop-second concept was pretty nifty. Eventually I discovered that I rarely used our Surface as a tablet. And yeah, it was plain horrible to use on my lap.

I’ve since come to prefer 360-degree designs like Lenovo’s Yoga, HP’s many flavors of x360, and others. They basically feel and function just like a typical clamshell design, and for the few times a year when you need a tablet, you just flip the keyboard around. Because the keyboard is attached, there’s no magnet to give way and send your tablet clattering to the floor, and no need to learn origami to close it back up. The 360 designs also works great for presentations in A-frame mode.

Our first test is Maxon’s Cinebench R15 benchmark. It’s a 3D rendering benchmark built on an older engine used in its commercial Cinema4D product. Intel has shied away from Cinebench and such 3D rendering performance tests because, well, who the hell does 3D modelling on a tiny laptop?! While we agree it’s not typical, it also hasn’t been feasible previously. With today’s multi-core laptops, it’s actually possible.

For our test, we ran Cinebench with the Dell XPS 13 2-in-1 in its stock form out of the box—and also ran it using the performance mode option in the Dell Power utility.

Performance of multi-threaded work is simply impressive, with the stock laptop outperforming the clamshell Dell XPS 13 9380 by 11 percent on stock settings and a blistering 20 percent when set to its performance mode.

Most applications rarely stress more than a single thread, though, so we also ran Cinebench R15 in that mode. The Dell XPS 13 2-in-1 7390 again comes out on top when set to its performance mode, and it posts a very close third in defulat mode—losing to its sibling, the XPS 13. The performance is actually all fairly similar, which has long led us to say that for most tasks, such as browsing and Office, most will never be able to “feel” the difference between most modern laptops.

To see if that holds up, we also run UL’s PCMark 8 Work Conventional. The test simulates work application tasks using the CPU (conventional) rather than using the graphics chip. Again, the Dell XPS 13 2-in-1 does not disappoint, winning both top spots with its two tested modes. But again, you’d really be hard-pressed to feel the difference between a really fast laptop and one that’s “just” decently fast.

Our last CPU-focused test uses an older version of the free HandBrake encoder to convert a 30GB 1080p file using the Android Tablet preset. The test loves multi-core laptops and also takes a significant amount of time to complete, so you can consider this a pretty handy stress test of a CPU.

The XPS 13 2-in-1 comes out on top when set to performance mode. When it’s not, the XPS 13 2-in-1 is basically tied with other top-end 8th-gen Whiskey Lake laptops. We should also note that the version of HandBrake we use is older and uses mostly conventional methods. Newer methods that can use the GPU and its Quick Sync module should put the Dell significantly ahead of the pack.

For the most part, the 10th-gen Ice Lake CPU in the XPS 13 2-in-1 offers just incremental improvements in CPU operations (unless you get to specialized instruction support such as AVX512, DL Boost or encryption). But the GPU side simply sings all the time.

You can see this below in UL’s SkyDiver test, which simulates graphics performance for lighter gaming tasks. You’re basically looking at a 100-percent increase in performance with Intel’s Iris Plus graphics. Some of that comes from the increased memory bandwidth from the newer RAM LPDDR4X, and some of that comes from the vastly improved graphics cores. Intel graphics is suddenly almost respectable, and somewhat competitive with Nvidia’s MX150 discrete graphics. We say “almost” because it’s not like you’ll be playing the newest, most intensive titles at 1080p at 60 fps—maybe 30 fps at low settings. Most would likely prefer 720p and medium to low settings for smoother gaming.

Basically, we’d say Iris Plus graphics is acceptable for esports-level of gaming. If you want higher frame rates, we’d recommend coupling the XPS 13 2-in-1 with an eGPU Thunderbolt 3 cabinet.

Our last test is the all important battery life race. For this, we charge the battery to full and set the laptop in airplane mode, with earbuds plugged into the audio port and the brightness set to a reasonable 250 nits to 260 nits. We then loop a 4K video until the laptop runs out of juice. Our run time was just under 12 hours, likely thanks to the larger battery and slightly lower-resolution panel. That’s very good, only slightly behind HP’s Spectre x360 13t, whose ”1-watt panel” continues to wow.

One last test we’ll throw at you is the laptop’s microSD read and write speed. We don’t typically care because it’s an often-unused feature for most. And even when it is, a few seconds won’t kill you, will it?

With the Dell XPS 13 2-in-1’s permanent SSD, though, the only way you’ll ever add storage to the laptop is by putting a memory card in it. We wanted to see if the slot could substitute as a permanent storage option by, say, dropping in a 1TB microSD card.

For our test we used a Sandisk 256GB Extreme microSD card and measured its sequential read and write performance using Crystal Disk Mark 6. We then compared it to the Dell XPS 13 9380, and HP’s Spectre x360 13t.

The clear winner is the HP, which appears capable of reading from the card at near its maximum speed for most laptops. The memory card can actually perform even faster reads and writes, but it requires a proprietary USB 3.0 Sandisk card reader or a laptop that support the feature. So far, we know of no laptops that do.

Both of the Dells appear to use the same card reader controller, and both also get handily beat by the HP. It’s not a dea-lbreaker, but we would have liked to see better performance from the Dells, especially if the company continues to drive toward permanent SSDs in its future laptops.

There’s a lot to unwind on Dell’s new XPS 13 2-in-1. The first is the performance front. Yes, you can argue (and we’d tend to agree) that performance in an ultraportable laptop is secondary—but it’s also something worth rating. You are, after all, paying extra money for that Core i7 over a Pentium for a reason, right?

Dell’s reputation is to swing for the fences on performance, and the XPS 13 2-in-1 lives up to its expectations. It’s not only the fastest 2-in-1 we’ve seen, it’s also faster overall than clamshell designs including its stellar sibling, the XPS 13 9380.

The thing is, besides the performance, there’s just so much more. With its superior 16:10 aspect ratio screen that’ll hit a blazing 500 nits, its touch and pen support (pen is optional), and its ability to convert into an A-frame or tablet mode, there’s really only two reasons to prefer the clamshell over the 2-in-1 XPS: the keyboard and the permanent SSD. In the grand scheme of things,  we’d just deal with it, because we think the convertible nature makes it a much more versatile laptop.

In the end, you get a fast convertible actually capable of some gaming, with all the versatility that a 360-degree hinge brings. That’s a formula for a near-perfect laptop.