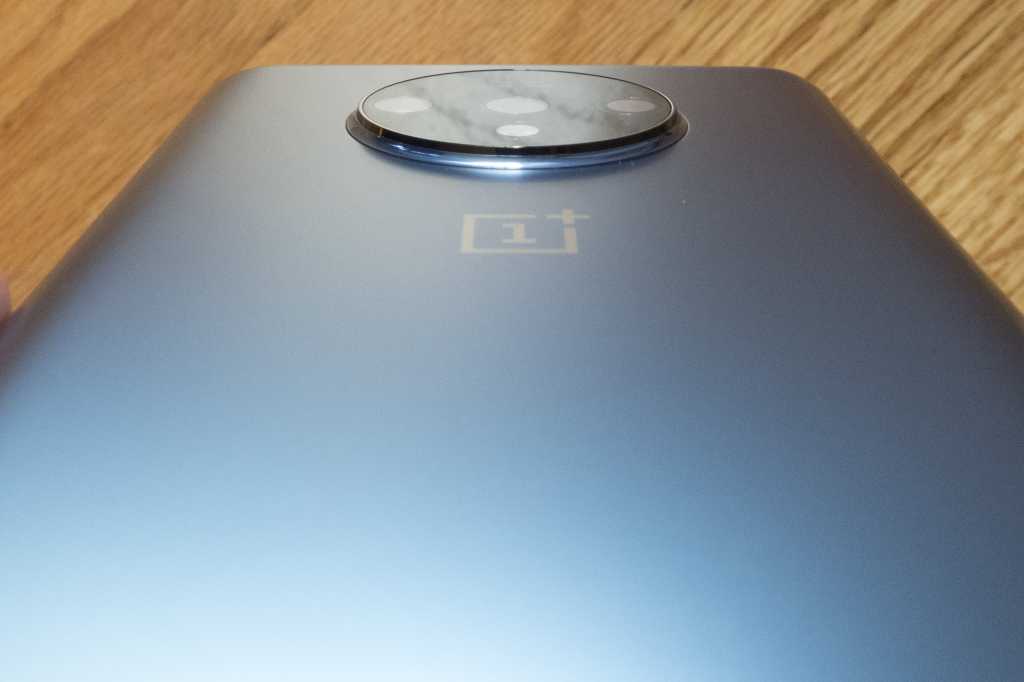 Even without an edge-to-edge design, the OnePlus 7T is one of the best Android phones of the year—at any price.

In a world of big and bad pro, plus, and premium smartphones, the OnePlus 7T is Baby Bear: Just right. Coming alongside a refresh of OnePlus’s own surprising “pro” phone, the 7T brings top-of-the-line specs, high-end features, and flagship-caliber performance at a price point that undercuts pro and non-pro phones alike.

All of which begs the question: Why do we even need “pro” phones? Curved screens, better cameras, and faster charging have become the hallmarks of “pro” phones, but the OnePlus 7T doesn’t feel any less complete or cutting-edge without the OnePlus 7T Pro’s edge-to-edge screen or pop-up selfie cam. If anything, the existence of the 7T Pro makes the OnePlus 7T seem like an even greater value than it is (even if the former isn’t actually available for purchase in the U.S.).

Before we get into what the the OnePlus 7T has, let’s talk about what it doesn’t have: wireless charging and IP-rated water resistance. Still. (Neither does the OnePlus 7T Pro, so that’s not a reason to upgrade.)

It’s something of a punchline at this point, but for a phone that purports to be a flagship killer, it’s becoming more and more of a glaring omission—especially since the OnePlus 7T will be in T-Mobile stores alongside the Galaxy S10 and iPhone 11, both of which include wireless charging and IP68 water resistance in their least-expensive models.

As far as the latter goes, OnePlus claims that the its phones do have some degree of water resistance but doesn’t want to its users to pay for the certification through higher priced phones. However, it doesn’t actually offer any specifics as to how long and deep you can dunk your OnePlus 7T, so I wouldn’t recommend taking it swimming.

The lack of wireless charging is continues to be a head-scratcher, especially since OnePlus continues to lead the wired charging pack. The OnePlus 7T introduces OnePlus’s new Warp Charge 30T, which will fill up roughly 70 percent of the phone’s 3,800mAh battery in about a half hour. The proprietary tech puts the fast-charging wizardry in the charger rather than the phone to deliver a sustained 30-watt charge for longer without risk of overheating. And you won’t need to buy a separate $50 plug to enjoy it—OnePlus supplies a 30-watt 30T charger and cable in the box, besting the bundled powered adapter in the Note 10+ (25W), iPhone 11 Pro (18W), and Pixel 4 (18W).

Of course, wireless charging is about convenience, not speed, and if you’re coming from a phone that has it, the inability to quickly pop it on a charging pad while you work or sleep will surely stand out. Add to that the fact that the Warp Charger and cable are among the biggest I’ve used—and you won’t get the same guaranteed speeds and protection without them—and you’ll definitely feel its omission in the OnePlus 7T.

A faster display makes all the difference

If you can overlook those two missing features, however, the OnePlus 7T is inarguably one of the best Android phones you can buy. The front is very similar to the 6T, with a teardrop notch and slim but visible bezels all around. It’s not quite as striking as the curved displays on Galaxy Note 10+ or the OnePlus 7T Pro, nor as symmetrical as the iPhone 11, but it’s still one of the best-looking phones around.

Around the back, the OnePlus 7T eschews its traditional pill-shaped camera array for a eye-catching circle. It’s as distinctive as the iPhone 11 Pro’s bump—and just as extrusive—and like its premium peers, OnePlus has filled it with a trio of lenses. As phones inch closer to the day where the front will be all screen, the rear case is increasingly where a phone’s unique character can be found, and the OnePlus 7T certainly stands out.

The OnePlus 7T has a 6.55-inch Full HD (2400 x 1080) OLED display that’s bigger than basically every competitor, save the Note 10+ and OnePlus 7T Pro. If you like big phones, the 7T is pretty much the perfect size. While it’s less than two-tenths of an inch smaller than those phones, the OnePlus 7T is much more comfortable to hold and use with one hand. The bezels also help in that regard, limiting the accidental touches that are all too common with “infinity” screens.

Even without fancy curved edges, however, the OnePlus 7T has an excellent OLED display. It’s a bit brighter than the 6T (a max of 875 nits of brightness vs 800 on the 6T) and looks great when OnePlus’s “Nuanced dark” theme is switched on. Like the 6T, an optical in-display fingerprint sensor is still the only secure biometric authentication method, and it’s greatly improved over its predecessor. I’d still prefer a physical sensor or 3D facial recognition like the Pixel 4, but the in-display sensor here isn’t nearly as finicky as it is on the 6T.

Like previous OnePlus panels, it’s not quite on the level of the Galaxies and iPhones—and it still doesn’t have an always-on display option, opting to once again rely on a lift-to-wake ambient display—but it has one thing those displays don’t have: a 90Hz refresh rate. The OnePlus 7T isn’t the first phone to sport a 90Hz display, in fact it’s not even the first OnePlus phone to have it. But you won’t find another phone that offers it at this price, and when you try it out, you’ll wonder how you ever lived without it.

We spend a lot of time talking about the processors in our phones—and the OnePlus 7T certainly has an excellent one—but when you’re dealing with touch screens, the response is as important as the completed action. The OnePlus 7T’s 90Hz display increases the refresh rate by 50 percent to make taps, swipes, and scrolls feel incredibly fast, which amps up the overall speed of the phone, especially when gesture navigation is turned on. It’s like Apple’s ProMotion display for the iPad Pro, but it’s even more dramatic at this size and price point. It’s the kind of feature you’d expect in a thousand-dollar “pro” phone, not a $599 one, and really gives the OnePlus 7T a leg up on its higher-priced competitors.

The best processor and a killer batter

The speed inside the OnePlus 7T is just as impressive. It’s one of the few phones packing a Snapdragon 855+ chip, and while it doesn’t represent a massive improvement over phones with a standard 855 processor, it’s the first phone I’ve tested to cross the psychological 10,000 barrier in the all-important PCMark Work 2.0 tests:

In reality, those numbers don’t amount to much of a difference over the Galaxy S10, Pixel 4, or any of the other top-level Android phones, but OnePlus 7T buyers can take comfort in knowing that they have the absolute fastest Android phone on the planet. The OnePlus 7 Pro’s “Fnatic mode,” which claims to optimize the CPU, GPU, RAM, and network performance to supercharge your gaming, also makes an appearance. Does it work? Who knows, but it’s the kind of flexing that gamers will love.

That speed is buoyed by the continued excellennce of OxygenOS. The first shipping phone to run Android 10 out of the box, the OnePlus 7T has a real Pixel-like level of hardware-software interrelation, and while it’s relatively light on new features (like Android 10 itself), there’s no denying that it’s still a front-runner for best Android skin. From the animations to the optimizations, everything about Oxygen OS is a downright pleasure to use and the closest thing to pure Android this side of the Pixel.

The light hand OnePlus takes with its skin no doubt helps the battery as well. A flurry of power efficiency features—adaptive battery, battery saver, dark mode—all help to push the OnePlus 7T’s battery life well into double-digit screen time. But even without any of that, I still topped 10 hours in my battery testing, and had nary an issue getting through a full day of use.

Even with hardware specs that challenge the highest-end Android handsets around, OnePlus phones have always had acceptable but less-than-excellent cameras. The OnePlus 7 Pro closed that gap somewhat, but it still left much to be desired, especially when shooting in challenging light. A lot has changed in six months, and OnePlus has been working hard to deliver consistent updates to its processing and the OnePlus 7T packs the best out-of-the-box camera OnePlus has delivered.

If you’re coming from the OnePlus 6 or earlier, the leap will be just as big as it was for the OnePlus 7 Pro. In fact, the OnePlus 7T has extremely similar camera hardware to the 7 Pro:

But beyond the bump in specs, OnePlus has seriously upped its processing game from the days of the 6T. OnePlus phones have always been able to capture very good photos in the right light, but the 7T produced some of the best photos I’ve ever seen in a smartphone. The color reproduction, exposure and white balance were particularly on point, as was the speedy focus and fast shutter. I think it’s safe to say the OnePlus camera is no longer a detriment.

The OnePlus 7T brings some new features to the OnePlus camera app as well, which are more than the usual party tricks. A new Macro Mode, which switches on automatically when you’re within close range of a subject, captures tiny details that other cameras will miss, like the texture on the wings and the fuzz on the bee’s body in the cropped photo below. Also, the ultra-wide lens gets to use the much-improved night mode, so you aren’t limited to 26mm shots in low light.

The 117-degree field of view on the ultra wide lens is slightly smaller than the Galaxy S10 (123) and the iPhone 11 (120), but that won’t matter to anyone looking to get top-notch shooting options without spending a fortune, especially since the ultra wide lens gets full use of night mode. Most smartphones limit nighttime shots to the main wide lens, but OnePlus can handle it on both, which is a nice addition. More importantly, it’s improved the behind-the-scene computational algorithm so nighttime photos look very respectable on the 7T.

With the launch of the Pixel 3a, OnePlus seriously needed to up its camera game to stay relevant to the budget-conscious and experience-minded Android crowd, and the OnePlus 7T absolutely delivered.

Should you buy a OnePlus 7T?

The reasons to not buy a OnePlus phone are rapidly shrinking. Where design, carrier support, and camera were all detriments on previous models, OnePlus has turned those from cons into pros over the past few models, and the $599 OnePlus 7T is truly a phone any manufacturer would be proud to call a flagship.

Yes, it’s missing wireless charging and bona fide water resistance, and Android diehards will absolutely miss the always-on display, but the OnePlus 7T is able to stand shoulder to shoulder with the Android greats in every other category. For 40 percent less than the Galaxy S10+, Pixel 4 XL, and iPhone 11 Pro, OnePlus no longer should be the brand to consider if you don’t want to spend a lot. It should be the phone you get even if money is no object.