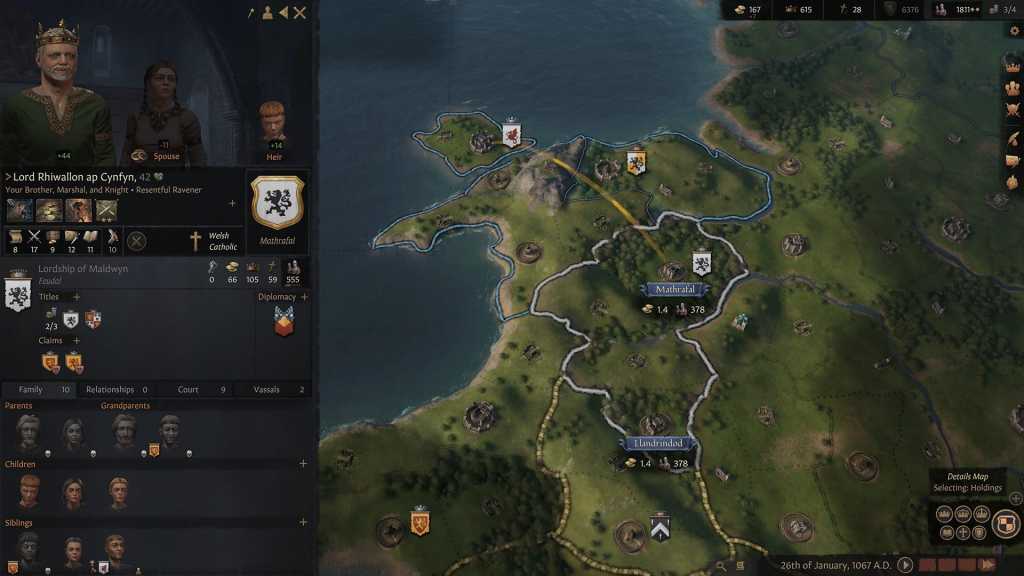 The king is dead. Long live the king. Paradox unveiled plenty of projects at the 2019 iteration of its annual PDXCon fan gathering, but none loom larger than Crusader Kings III. After eight years and over a dozen expansions, the game that (arguably) made Paradox a household name is passing the crown to an heir.

There’s not much to go on yet, as the debut trailer doesn’t show a lick of in-game footage.

Paradox did provide a few details in its press release though, calling it the start of “a new generation of grand strategy games, with new 3D character models and an even more detailed map.” The first claim is pretty hard to adjudicate at this point, but the latter two are certainly borne out by the few screenshots Paradox sent over.

To wit, it looks like you can see castles and other fine details on the map now, which is a neat feature. The user interface looks a lot tidier and more dynamic as well. There’s less information on-screen at any given moment, but the various sub-menus on display here are all eminently readable.

And I love how the iconic pop-up events now feature relevant characters in the artwork. Check out this example of Eustache and his crossed-arms disdain for Mayor Ebbon of Montreuil-sur-Mer:

Now that’s what I want from my medieval politics simulator, an accurate idea how annoyed my character is at any given time. I’ll miss the hand-drawn look of Crusader Kings II, but 3D characters seem like they’ll give Paradox a lot more flexibility.

Another screenshot confirms that the Way of Life expansion’s “Lifestyles” will feature in Crusader Kings III from the start, albeit much expanded. And the press release claims “religious beliefs are more firmly under your control,” which sounds promising as religion grew in complexity over the course of Crusader Kings II.

That’s the catch though, isn’t it? As I said, Crusader Kings II has undergone eight years of continuous development and expansion. It’s hard to imagine Crusader Kings III having nearly the same depth at release, no matter the quality-of-life improvements. Like every numbered Civilization reset, it might be years before Crusader Kings III is considered a proper heir to the throne. Hell, it might never happen in some people’s eyes. Civilization VI is three years old and still struggles to surpass its predecessor’s popularity some days.

Even so, I’m excited to see them try. Paradox’s games have come a long way since the release of Crusader Kings II, and I can’t wait to play a sequel that draws on the lessons from those intervening years. We won’t have to wait that long either, as Paradox claims Crusader Kings III will release in 2020. I’m not entirely convinced that date will stick, but I hope it does.

And if you’ve never played Crusader Kings II but are curious about the series? The base game is now free-to-play on Steam. It’s a great entry point for grand strategy, and literally hundreds of hours of entertainment in a very small package.

Okay, it’s hard to top Crusader Kings III. That said, Paradox made quite a few other announcements during its press conference. First and foremost is Surviving the Aftermath, which Paradox teased last week. Billed as the next game in the Surviving series, it’s a spiritual successor to colony builder Surviving Mars.

The gimmick, of course, is that you’re now trying to survive the post-apocalypse instead of the harsh Martian landscape. You’ll have to feed your survivors, confront bandits, hunt for old technology, and more.

Also it releases today in Early Access. Yes, Paradox pulled one of those “You can play it now!” stunts. You’ll find it on the Epic Games Store, and Paradox is promising monthly updates ahead of a proper release in late 2020.

The remainder is a litany of expansions for Paradox’s ever-growing catalog of ongoing games. Hearts of Iron IV is getting an expansion titled La Resistance, and as you’d expect it’s mostly themed around France—both the Resistance and the Vichy government. The press release also mentions that there’s a more in-depth simulation of the Spanish Civil War for people to toy with.

BattleTech announced its third expansion, Heavy Metal. No Black Sabbath unfortunately, but Harebrained is adding eight new mechs with this expansion, seven of them classics from the tabletop game. The eighth, which I assume is the “Bull Shark” referenced in this trailer, is a brand new addition to the universe. Also, expect “eight all-new weapons systems” and a new mini-campaign. It’s out on November 21, about a month from now.

Age of Wonders: Planetfall just released in May but it’s also getting an expansion in short order. Dubbed Revelations, it’s due to launch on November 19. There’s an ominous trailer below, which seemingly centers around an army frozen in stasis—and which is now starting to awaken.

Last but not least, Stellaris is receiving two expansions. One is the Lithoid species pack, which adds a race of rock-people to the galaxy—including ships that appear hewn from rock as well. Federations is the larger expansion though, overhauling the titular government type with new forms (like Hegemony and Martial Alliance), introducing a system to give your empire an origin story, and adding the United Nations-esque “Galactic Community,” a senatorial body that votes on laws affecting all empires.

All in all, a pretty good haul for Paradox. Condolences to all the people holding the Victoria III torch, but I’m pretty satisfied.