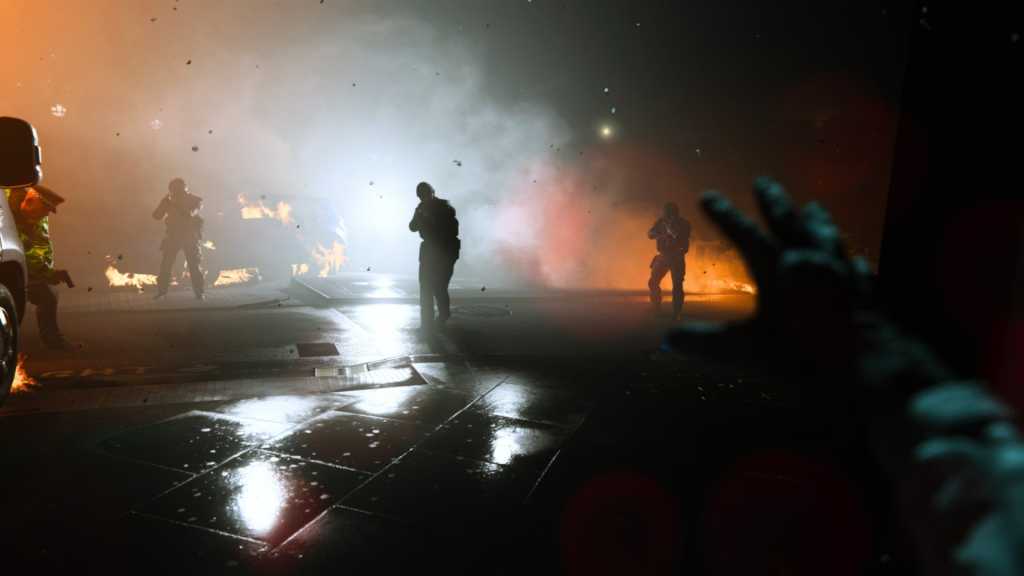 Call of Duty: Modern Warfare tries to be a serious commentary on present-day conflicts, but is mostly just another Call of Duty game by nature of the series’s longstanding blind spots.

I’m holding my breath. It’s silent in the house, or near enough. Boots pad up the stairs. Fabric rustles. A floorboard creaks. Somewhere, a woman is yelling. It is the calm before the storm, and then the door crashes open and the storm is here. We pile through, yelling. Motion. Two shots, and it’s over. Two shots, somehow more violent in their infrequency.

“Left is clear.” “Right is clear.” “Meet by the stairs.” And if the first was the calm before the storm, this is the eye of the hurricane. Again, the rustle of fabric and the muffled clomping of boots. Another floor, and more closed doors.

Call of Duty has spent the last decade raising the stakes, going bigger and louder with each new iteration. If 2019’s Modern Warfare reboot is any indication, that was the wrong choice. The quiet is where it’s most unsettling.

A decade under the influence

War never changes. Not nowadays anyway, and Modern Warfare is the proof. The ripped-from-the-headlines story Infinity Ward tells in 2019 differs from the one told in 2007, but only in the particulars. There’s no nuclear bomb in the new Modern Warfare, only chemical weapons. and yet we’re still fighting the Russians by way of poorly managed proxy wars, still convinced American military might is the proverbial thumb in the dam, holding back the worst of the world’s evils.

Do I believe it? No, but the idea is comforting. I played the original Modern Warfare in high school. Ardently anti-war, I nevertheless believed more in Call of Duty’s worldview at the time. Back then, even the anti-war folks still had those yellow ribbons tied to their cars. Easier to believe we were doing some good, even if the means were messy. Easier to believe the war might end one day.

It is, I think, harder to buy into Modern Warfare’s narrative in 2019, that interventionism is successful foreign policy. The forever-war that’s been the backdrop to more than half my life has not done much to stabilize the global situation, either domestically or abroad.

But Modern Warfare asks you to believe that it has, and that every situation can be solved by a small squadron of well-meaning men with guns. It’s American myth-making, the modern equivalent of The Magnificent Seven. Lines are drawn. Good fights evil. Good (mostly) triumphs.

Call of Duty is fond as ever of that “One man’s terrorist is another man’s freedom fighter” adage, so the split between good and evil doesn’t occur entirely along national lines. And yet there are certain axioms the series is still seemingly afraid to confront. What are we hoping to accomplish? Do we even know? Does it matter?

Modern Warfare wants to present the “messy” side of our foreign entanglements, but it’s not messy. Someone points a gun at you, you shoot them. They have information you need, you torture them. Everything is life or death in Call of Duty. It’s survival, and so it doesn’t matter who the enemy is or their intentions, because you know that you walk the path of the righteous.

This is where Call of Duty’s always faltered. Others can be evil, even the characters you don’t suspect. Never the player though. It’s why Spec Ops: The Line was such a fascinating subversion, with the revelation that by mechanically following orders the player had actually made everything worse. Spec Ops released in 2012, an indictment of Call of Duty as it existed then. Seven years on, Modern Warfare has the exact same blind spot as always.

If it’s frustrating, it’s only because Call of Duty so clearly wants to “say something” this time around. Thus the return to the present, after nearly a decade spent mining near- and far-future conflicts with zero stakes. Infinity Ward can build this thrill ride anywhere, but Modern Warfare grounds the story, strips away any abstraction.

And it succeeds in some respects. Modern Warfare has a knack for sussing out what feels authentic. There are two missions that involve sweeping buildings with a small squad, the particulars of which I described in the intro. Slow-paced, with minimal action, these are nevertheless some of the most unsettling sequences I’ve played in any shooter. They forego the usual artifice of “One soldier versus an entire army,” the mind-numbing onslaught that pervades most games, and in the process create something far more dynamic.

It’s the same restraint that made the Chernobyl levels so beloved in the original Modern Warfare. When you only fire fifteen rounds in an entire mission, each has the impact of a hundred shot off in a normal Call of Duty level. Hell, at times the 2019 Modern Warfare is even more brazen in borrowing from its past. There’s an extended sniping sequence late in the game, one that asks the player to factor in range and wind direction when firing, a clear homage to the original’s “One Shot, One Kill” mission.

Hardly innovative then, but effective, yes. This generation’s Call of Duty campaigns have a “thrill ride” reputation, a procession of setpiece moments with no time to catch your breath. Modern Warfare is more deliberately paced, and better off for it.

It’s not shocking or subversive though, no matter how hard it tries. It’s Call of Duty. It can couch itself in a vague intellectualism that treats Axl Rose’s “What’s so civil about war anyway?” like a deep philosophical premise, can quote Bukowski and Sartre when you die and point out that the burden of warfare invariably falls on the poor.

But at the end of the day it’s war-as-entertainment, uncritical and uncomplicated. Point me in a direction and tell me who to shoot. Russians? Sure. Terrorists? Even better. It doesn’t really matter, so long as we’re not forced to question too much the reality of the U.S. position abroad, or our past for that matter. Give me an “other” and the moral authority to pull the trigger.

I’d be lying if I said I didn’t enjoy Modern Warfare. I’d also be lying if I said I felt comfortable enjoying it. In a vacuum, it’s the best-constructed Call of Duty this decade. In a vacuum, it would be easier to appreciate its level design and pacing, or the way it uses sound and lighting and even film grain, without anything else to distract. There’s an intimacy to Modern Warfare’s action that I find horrific and fascinating all at once.

But at its core, an emptiness. Like Far Cry 5, Modern Warfare hopes to garner prestige from its aesthetic, from its “controversial” subject matter, without having to confront anything actually controversial. War never changes, and neither does Call of Duty. Not really, anyway.