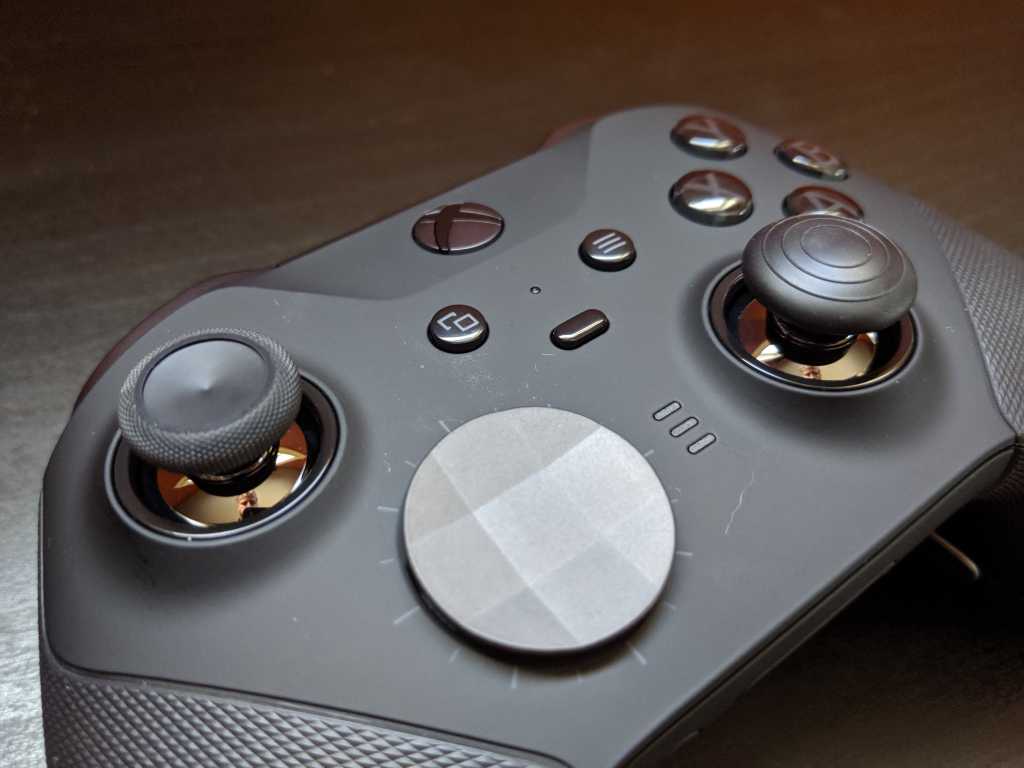 Microsoft hasn’t changed much with the Elite Controller’s first revision, but Bluetooth support, a redesigned rubber grip, and a built-in battery make it a worthy successor.

It’s surprising the Xbox Elite Controller Series 2 took this long. We first started hearing rumors of an Xbox Elite Controller follow-up back in 2017, when the Xbox One X had yet to launch and the console generation had a handful of years ahead of it still. Now in November of 2019 it’s finally here, with a new Xbox peeking over the horizon. Good thing Xbox One peripherals are confirmed to work on the next generation, eh?

The Xbox Elite Controller  Series 2 will prove one of this console generation’s most noteworthy contributions. Just four years into its existence the original Elite Controller’s status now seems unassailable—yet it’s worth remembering that Microsoft considered it a risky investment, a niche product for a few hardcore fans. And given it cost $150, why not?

It was a breakout hit though, and demonstrated that yes, people will pay for a premium controller. Not just people who know SCUF, but the general mass-market audience who buys first-party peripherals in Target during the holidays.

Enter the Elite Series 2, which stands as testament to the original’s success. What was a one-off experiment is now a codified part of Microsoft’s lineup, an interesting development in and of itself.

Not much needed to change, and not much has. In fact, the Elite Controller Series 2 is near identical at first glance. Only when held up next to the original do you start to notice subtle refinements here and there. For instance, the Series 2 is again built from gunmetal and rubber—but where the original sported silver accents, the Series 2 opts for a sleek and stealthy black-on-black look.

The rubberized grips now extend onto the front of the controller as well, a subtle comfort upgrade and hopefully a more durable design. The original Elite had a widespread issue with the rubber eventually splitting at the rear seam, but I imagine this wraparound setup will be less susceptible. We’ll find out in two or three years, I guess.

Regardless, holding the Elite Series 2 is a joy. It has weight to it, a heft that elevates it above the toy-like plastic of a standard Xbox One controller. Whatever trick of psychology that equates “Heavy” with “Good,” it’s in full effect here.

The faceted D-pad, an iconic symbol of the original Elite, carries over intact—albeit darkened, in keeping with the new color scheme. There’s also a cross-shaped D-pad included for those like myself who can’t stand the newfangled design. A concave circle, the faceted model is meant to facilitate use of the D-pad’s diagonals, but I’ve never gotten used to it. After a brief stint on the original Elite I swapped for the standard version.

Luckily the Series 2 is just as modular as the original Elite. Everything is magnetic, so you just pry the faceted D-pad off and replace it with the cross-shaped one in the box. Done.

The analog sticks are likewise replaceable, though Microsoft’s slightly changed the alternatives provided. The original shipped with two standard Xbox One sticks, two taller concave sticks, and then two “domed” or convex sticks. The Series 2 ships with a more motley assortment: Two standard sticks, two “classic” sticks which forgo the grip texture on the edges, one “tall” stick, and a single convex dome. Sorry, convex fans, but there’s no matching pair in the box. A bit odd, that.

As a consolation prize, you can now adjust stick tension. The original Elite had notoriously floppy sticks. Apply the slightest pressure and they’d push right over, a feature I liked but others didn’t. With the Series 2, the default is more like a standard Xbox One controller, a fairly stiff resistance. If you want to change that, pry off the stick heads and you’ll see a screwdriver indentation. Insert the included flathead, crank left, and you’ll be back to the floppy sticks. There isn’t much play to the tension adjustment, but enough to dial in your preference. More resistance means higher precision, but slightly slower reaction times and more effort to hold the stick over. Less resistance, vice versa.

The rear paddles make their return, and Microsoft’s slightly enhanced their utility in the ensuing years. Back in 2015 I complained that they weren’t really additional buttons, as all you could do was remap the A/B/X/Y commands to them. That fell well shy of what I wanted, which was full keyboard-style remapping—for instance, allowing you to map commands that usually required two buttons (because a controller doesn’t have enough inputs) onto a single paddle.

And…well, you still can’t do that. The paddles remain relatively useless on PC. That said, there are a few new commands you can take advantage of in the Xbox Accessories app, namely “Shift.” Using this allows you to add secondary functions to every button on the controller;  only activate when you’re holding down whatever you’ve mapped as the Shift key.

Unfortunately the PC gets the short end when it comes to the rest of the Series 2’s mapping options. Opening the Xbox Accessories app, you’re told you can map commands like “Take a screenshot” onto the Series 2, which I assumed would work through the Windows 10 Game Bar. Alas, I can’t seem to actually make this happen, either because it’s a console-only feature or doesn’t work with the beta Game Bar that Microsoft rolled out a few months ago.

I got slightly more use out of the Elite’s trigger locks. The Elite—and most high-end controllers—allow you to adjust how much pull the triggers need. The full analog range of motion is important for racing games and such, but shooters? That only requires a binary on/off. As such, sliders on the rear of the Elite allow you to “lock” the triggers and reduce the travel distance.

The main difference with the Elite Series 2 is these are now three-position locks, not two. The Series 2 triggers can be full-range analog, millimeter-travel bumpers, or something in between—the latter of which is actually the locked position from the original Elite. I can’t really imagine a functional use-case for the middle setting, though I suppose if you’re coming from the old model it might feel most familiar.

The biggest change by far however is that the Series 2 is a proper wireless device. The original Elite released in 2015, right before the Xbox One S controllers added Bluetooth. The Series 2 finally rectifies this disparity, so no need to buy the Xbox Wireless Adapter anymore as long as you have Bluetooth support, be it built in or via USB adaptor.

This newfound freedom is bolstered by the inclusion of a built-in battery, a first for Microsoft. Xbox controllers have continued to rely on AAs long past the point my other devices have switched over, but the Series 2 features a 40-hour battery that recharges by way of USB-C or via a dock. You could also leave it plugged in I suppose, but for the first time ever I think it might be easier to hook an Xbox One controller up to your PC wirelessly. I never thought I’d see the day—though I’ll be curious how well the rechargeable battery holds up over time. Sony’s DualShock 4 certainly disappoints after a few years.

As I said, the Elite Controller Series 2 will probably be on my desk for years to come. I used the original Elite until it literally fell apart, hundreds of hours later. And while I was a bit disappointed with the longevity of the original given its $150 price, the Series 2 seems like it’s rectified those shortcomings. It’s hard to know for sure of course, as nothing can really substitute for all that real-world testing. But if the Series 2 fails, it at least won’t fail in the same ways as the original.

With Bluetooth support and a rechargeable battery, plus the knowledge that all Xbox One peripherals will work with Microsoft’s next console, this is the Xbox controller to buy in 2019. And at $180, it’s also cheaper than the likely alternative, Astro’s PlayStation 4-oriented C40.

Either will serve you well though. The C40 ships with its own dongle, which is great for those who don’t have Bluetooth built into their motherboard. Then again, the Xbox controller is basically the “default” on PC, which gives the Elite Series 2 an edge that’s hard to dispute—and an edge that’s going to make it my controller of choice.