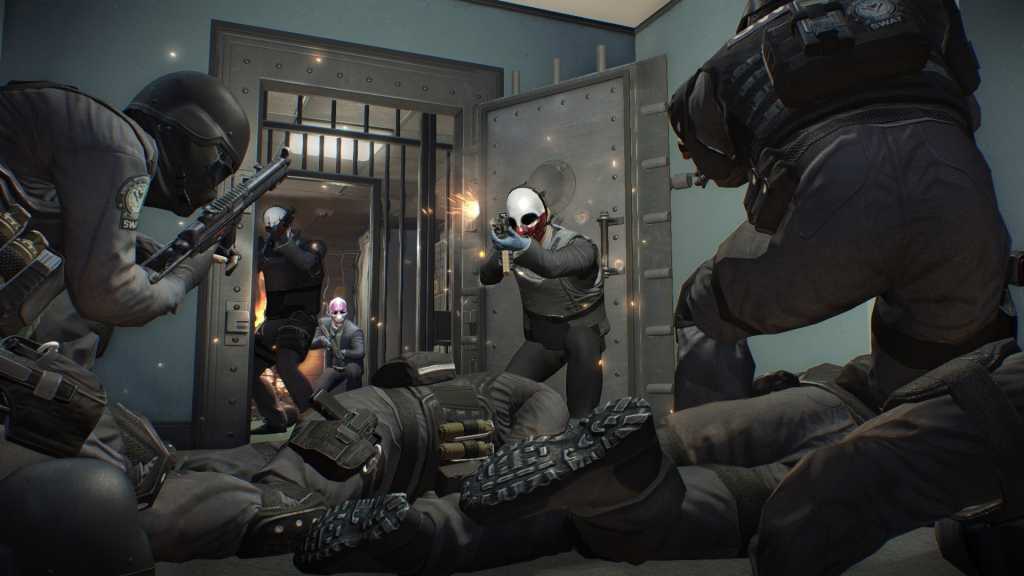 Starbreeze has a new CEO and a plan to get back on solid ground. And that plan? The heist of our age: Reviving Payday 2 development after a year’s hiatus. Somebody get the drill, the C4, and the windowless van.

That news, plus Battlefield V heads to Wake Island, Ubisoft delays Watch Dogs Legion and the rest of its 2020 lineup, 28 seconds of the Command & Conquer remaster, and Agent 47 dons a pumpkin for Halloween.

It’s great to see Bloober Team getting a little love. After giving away Observer last week, Epic’s back with Layers of Fear as one of this week’s free game offerings. ‘Tis the season after all, with Halloween right around the corner—though if frights aren’t your favorite, you can also grab a copy of the Portal-esque puzzler Q.U.B.E. 2.

And next week is a double-dose of Halloween spirit, with Costume Quest the friendly offering and Frictional’s brilliant Soma the spookier.

Of course, Epic’s not the only one partaking in Halloween. Pathologic 2 is releasing its standalone expansion The Marble Nest next week, a spin-off story that also serves as sort of a demo for the full experience. As such, it’s free for Pathologic 2 owners and $10 for everyone else. The trailer is suitably unsettling, if you’d like a glimpse at what awaits.

Borderlands 3 is in the scary spirit as well, putting out its first post-release content this week. Dubbed “The Bloody Harvest,” it introduces a new planet (“Heck”) full of zombies and other seasonally appropriate foes. The setting looks neat enough, though the cosmetics aren’t nearly as weird as I expected in a post-Overwatch, post-Fortnite era.

Hitman, too? Indeed, Hitman 2’s running a Halloween event as well, an escalation contract that seemingly casts Agent 47 in the role of the Headless Horseman, albeit sans-horse. It’s quite a trailer, with bodies being dragged into ritual circles and a screechy violin to punctuate the action. Almost makes me wish for a Hitman game that leans into the weirdness on display here.

A different sort of scary: Ubisoft this week announced myriad delays. As far as I can tell, it affects every game in development over there. Watch Dogs Legion is getting pushed back a few months, while Rainbow Six Quarantine and Gods and Monsters were pushed to later in 2021.

And it seems like Ghost Recon Breakpoint was the inciting incident here. While I maintain it’s a more interesting game than Wildlands, it bombed sales-wise—which Ubisoft’s Yves Guillemot chalks up to, in part, it being “harder to generate interest for a sequel to a Live multiplayer game, when prior iterations benefited from years of optimization.”

I’d go one step further and say this is the expected end-result of games-as-a-service. Why buy the new game when the new one is designed to keep you playing forever? Feels like a problem publishers created for themselves here.

Not every update is geared around Halloween festivities. Battlefield V breaks from the trend, taking October 31 to drop its “War in the Pacific” update. There’s a new cinematic trailer, though really all you need to know is that Iwo Jima and Wake Island are coming in the near future, and that you’ll finally be able to play as the good ol’ US of A. Still holding out for Midway, personally.

Petroglyph announced a Command & Conquer remaster last year, and this week we got the briefest glimpse of the updated visuals in action. The video below starts with the original graphics, then flips to the new (and much smoother) sprites a few seconds in, an effect that’s a bit like cleaning all the gunk off your glasses.

Another ‘90s remaster, Bethesda announced a few weeks ago that Doom 64 will be coming to PC for the first time next year. Why would you want to play the Nintendo 64 version of Doom? No idea. But you can, and now there’s a trailer for it.

Just last week Starbreeze announced it’s working on Payday 3 for a 2022 release, and I thought “That’s a long time to wait for a company on death’s door.” Turns out Starbreeze has a plan for the interim, and the plan is to revive active development on Payday 2. It’s a surprising about-face after about a year’s hiatus, but maybe a sign of good things to come from Starbreeze? Maybe.

Another sequel that seems too far away, Daybreak this week confirmed it’s working on Planetside 3 and outlined some basic design tenets. Will they come to fruition? Well…

Don’t get me wrong, I’d love to see a proper next-gen Planetside. I’m simply not convinced Daybreak has the runway to make it happen at this point. It’s a real race against time over there, and bringing up Planetside 3 this week feels like a life preserver tossed blindly in the ocean after the disappointing launch of Planetside Arena and subsequent layoffs.

Weather outside is frightful

Capcom’s tightened the window between the console and PC releases of Monster Hunter, but there’s still going to be a few months’ delay before we see the Iceborne expansion over here. Released in September console-side, this week Capcom tagged the PC version with a January 9 launch. All that ice sure looks pretty though.

Nothing can ever be easy for Fallout 76, eh? We cast some sidelong glances at Bethesda’s new $100-a-year subscription service earlier this week, because charging for quality-of-life features seemed dubious. Turns out the quality-of-life features don’t even work as advertised though, which is…well, a mess. The Scrapbox, an unlimited storage container, has reputedly lost some people’s crafting materials, and so-called “private servers” aren’t actually all that private, as anyone on your friends list can join even if not specifically invited.

Bethesda told Polygon it’s working to rectify both issues, but woof, not a great first (or eighteenth) impression.