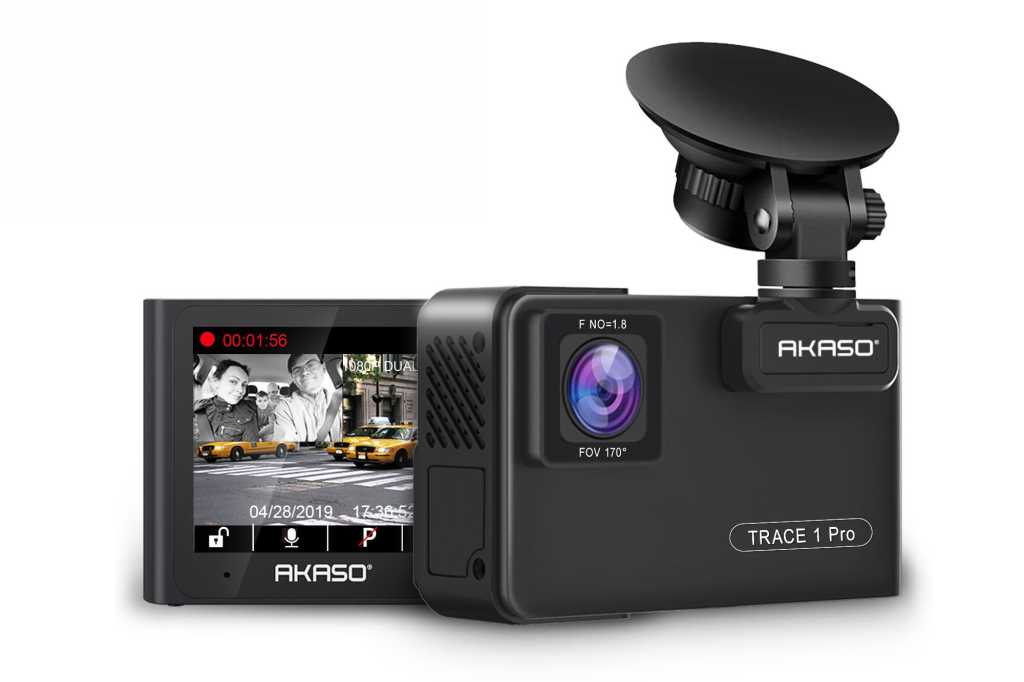 Akaso
At a Glance

This affordable front/interior dash cam takes very good front and interior video, has GPS, and throws in easy phone connectivity for monitoring, configuring settings, and offloading video. It’s one of the best dash cams on the market though we wish the front night video were just a little less grainy.

The Akaso Trace 1 Pro is the premium version of Akaso’s affordable Trace 1, which I already liked for its great front/interior day/night video, even though it lacked GPS. The Pro version of the Trace 1 reviewed here adds the missing GPS and doubles down with Wi-Fi phone connectivity.

The kicker is, that at $130, the Trace 1 Pro is still in the financial ballpark for most users. For ride-givers that don’t want to fork over for Nextbase’s mighty modular 422GW (or 322GW), this is likely the best thing going.

The Akaso Trace 1 Pro is a nice-looking black box that’s roughly the size of a medium bar of soap. The 170-degree field of view front and interior cameras capture at 1080p when used in tandem, but you can capture at 1440p with the front camera if you run it solo. Just above the rear/interior camera is the infrared lighting module. It protrudes just a bit past the camera, so emissions aren’t partially blocked, as with some dash cams. 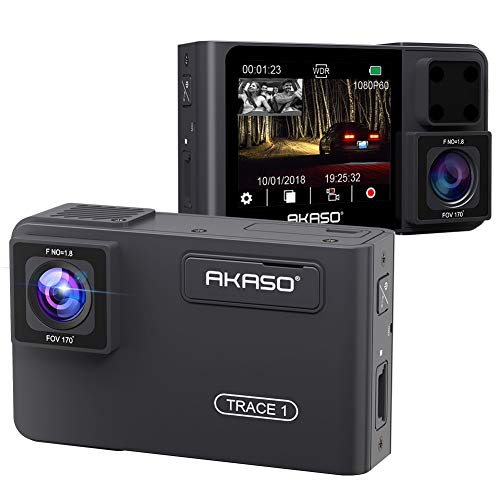 Four buttons on the bottom of the unit are used to traverse the settings menus displayed on the two-inch color screen, as well turning various features on and off. The unit features GPS, which is both watermarked and embedded for playback with a mapping video player or Google Maps, but the sticky-mount module is external and located about a foot down the mini-USB power cable.

As the Trace 1 Pro ships with a suction mount, the semi-permanently attached GPS module could leave the cable hanging in mid-air when you remove the camera. Give that some thought when you place the GPS.

On-board features include parking mode, wide dynamic range (a larger color gamut), the aforementioned GPS, and a 300mAh battery that will keep the camera running post-impact to capture action you might miss with a super-capacitor. Or under less dire circumstances, to take video if you’re stuck with a lost, dead, or full cell phone.The battery also enables parking mode, where the Trace 1 Pro’s g-sensor will power on the camera to capture up to twenty 30-second videos without any hard-wiring.

There’s also a fatigue alert. Do us all a favor: Pull over and cat nap for 20 minutes if you’re feeling tired, and you won’t need the nanny technology.

A shout-out to Akaso for thinking to put a large digital clock readout on the display when the live camera view times out. You can turn this feature off if you want, but I found it a lot easier to read than the one on my radio, and left it on. That’s just one of the flourishes in a very thoughtful design.

The Akaso Car phone app is available for iOS and Android, and connects via the camera’s Wi-Fi. It will show you a live view and offers easy access to all the settings. You can also use it to upload videos to your phone, but not the cloud, as with the Owl  Car Cam or the Purecam. The app is available only when you turn on the Wi-Fi from the dash cam’s settings page, and it shuts off when you exit to start using the camera normally.

The Akaso Trace 1 Pro’s front day captures are excellent. Color is nicely saturated, and the image shows a very good level of detail.

Interior captures are very good, however, they’re monochrome during both the day and at night. If you’re looking to take full-color videos of your cabin antics, this is not your camera.

If, on the other hand, if you’re a professional ride-giver or law enforcement officer, interior captures are more than detailed enough for legal purposes. Capturing in monochrome also saves storage space.

The only thing that mildly tempered my enthusiasm for the Trace 1 Pro was that the exterior night captures are a bit on the blurry side. I was hoping for better from the Sony IMX307 sensors. To be fair, the Z-Edge F1 that closely competes with the Akaso Trace 1 Pro suffers the same issue, but I’ve seen better as well. Post-processing helped only slightly.

Though details are a bit lacking in the exterior night captures, there’s no such issue with the night interior captures.

Note that the date and time in a couple of these captures is off. I was thinking the GPS would automatically set them as per normal. It doesn’t. If you buy a Trace 1 Pro, set these first thing, as they might be important in a legal tussle.

A most excellent bargain

I complained about the Akaso Trace 1 Pro’s front night video, but it’s actually on a par with anything else in the price range. In total, I can’t think of a better dash cam with both GPS and infrared for $130. A great deal on a very, very good product.