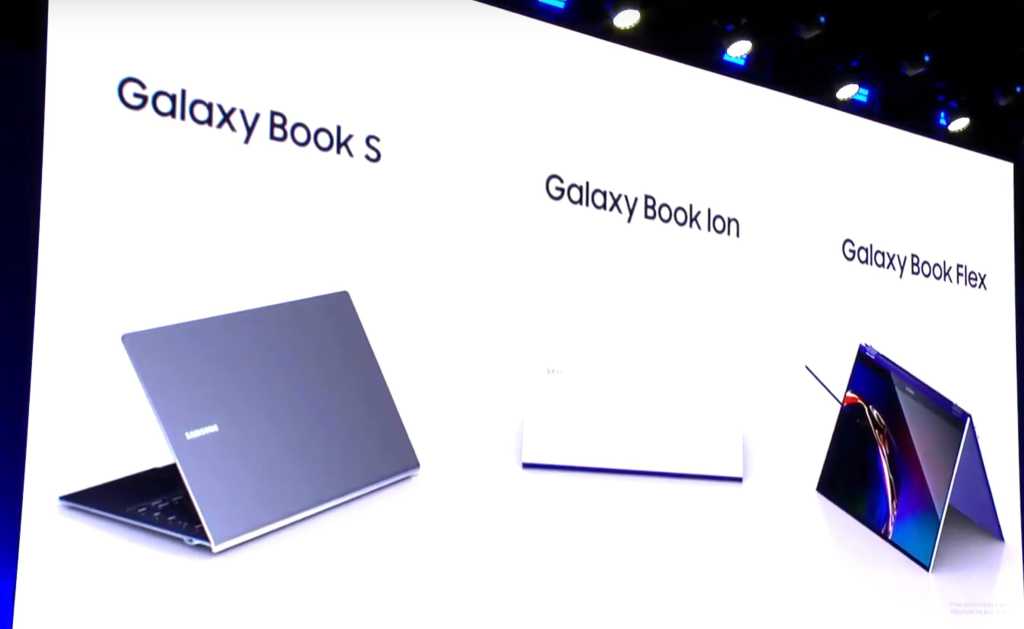 If you like big, beautiful screens, you may want to start saving up: Samsung’s new Galaxy Book Flex and Galaxy Book Ion will boast QLED screens and up to a whopping 600 nits of brightness for working outdoors.

Both the Galaxy Book Flex and the Galaxy Book Ion are part of Intel’s Project Athena, which has the chipmaker working closely with a PC maker’s engineering team to design “halo,” or flagship, devices. New features include the ability to charge a Galaxy phone via wireless charging embedded in the touchpad, as well as the bright new quantum-dot, or QLED, displays that feature 100 percent color accuracy.

We’re interested to see what the battery life will be: Both the 13-inch and 15-inch Ion and Flex devices boast 69.7Wh batteries, which is higher capacity than normal, especially for a 13-inch device. Dial down the 1080p displays’ brightness when indoors, and you could have notebooks with exceptional battery life.

The Flex and Ion will join the Samsung Galaxy S, announced this summer as “Project Limitless,” which uses the Qualcomm Snapdragon 8cx for all-day battery life. However, Samsung invited Intel corporate vice president Gregory Bryant on stage to announce a second Samsung Galaxy S, which will use the Intel Lakefield processor. Samsung representatives clarified: “We have announced two versions of the Galaxy Book S,” one wrote in an email. Shipping dates will be revealed at a later time, Samsung said.

Both the Flex and the Ion use Intel’s 10th-gen chips: Comet Lake and Ice Lake, respectively. Both models will use Intel’s integrated GPUs in their 13-inch versions; and both notebooks will offer the option of an Nvidia GeForce MX250 GPU in their 15-inch versions.

Samsung’s Galaxy Book Flex appears to be the more conventional of the two new notebooks, with a 360-degree hinge. It also integrates the S Pen, allowing drawing capabilities, access to the PENUP creative community, and, more importantly, allowing the S Pen to wirelessly control your PC with new gesture controls for PowerPoint and video playback. It’s all housed in a “Royal Blue” aluminum chassis, Samsung said.

The Galaxy Book Ion, for its part, is an aggressively designed ultralight that weighs just 2.53 pounds in its 13-inch form factor. Like the Flex it boasts a QLED display and the wireless charging, which looks like it will occupy your laptop’s touchpad when in use.

This story was updated at 4:27 PM to clarify that there are two versions of the Galaxy Book S, according to Samsung.