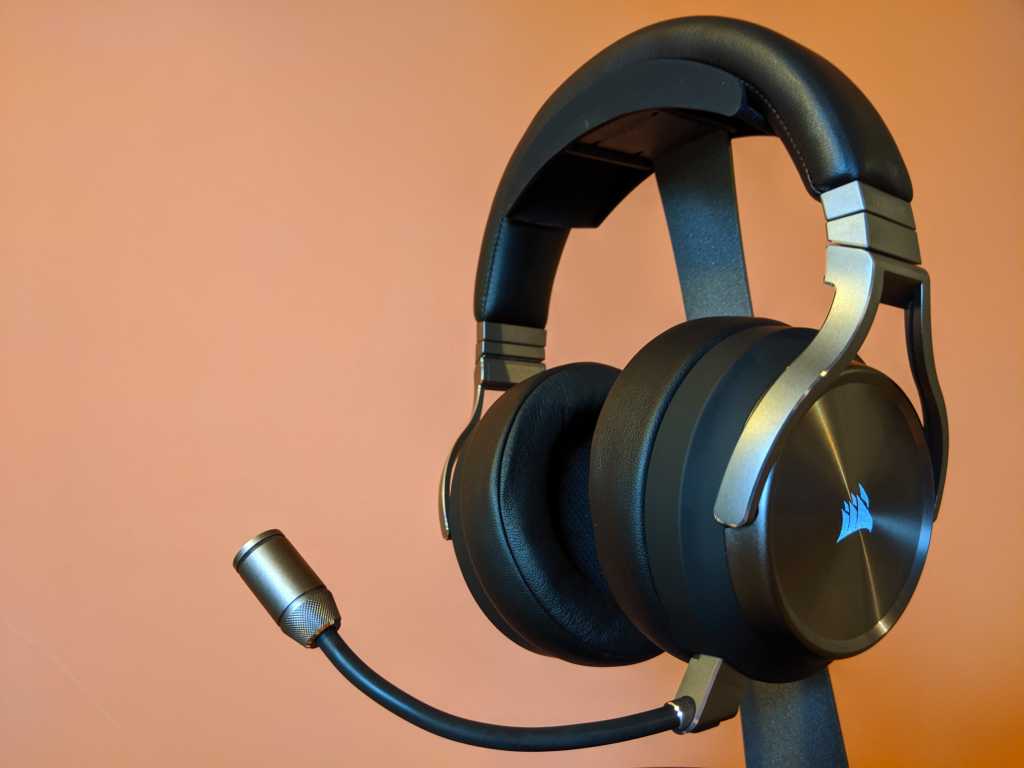 Corsair’s new Virtuoso RGB SE doesn’t sound quite as good as it looks, but it looks really damn good. If nothing else, it’s a much-needed alternative to Corsair’s cheap Void line.

Corsair’s headsets have always seemed anomalous to me. Here’s a company that consistently constructs top-of-the-line hardware, be it cases or memory or mice or keyboards. Especially keyboards, actually. The Corsair K95 is flashy as hell, but it’s also built like a tank.

Headsets are the outlier. Corsair’s never made one that got my blood pumping. There have been slight improvements over the past decade, but the Void is still oddly cheap-feeling held up to the rest of Corsair’s lineup.

That in mind, the Virtuoso RGB is the headset I always expected Corsair to make. Sure, it costs more than twice as much as the aforementioned Void line, but Corsair takes full advantage of the additional headroom to make a headset worthy of the brand.

Chrome and leatherette, soft lines and minimalism. The Virtuoso RGB is the latest headset to borrow from the design language of luxury cars and watches (following from Logitech’s G Pro X). For example, the etched Corsair typelogo and extension measurements on the headband are small details, but feel suitably delicate and precision engineered to merit an association with luxury.

The Virtuoso is full of elegant details, really. Corsair’s “sails” logo is emblazoned on each earcup—or rather, through. What looks at first glance like additional etching is in fact dozens of ultra-fine perforations, a very Apple-esque element. The perforations allow for the titular RGB backlighting to shine through. It’s worth noting that once Corsair’s software is installed, the Virtuoso defaults to a soft bluish-white, a less garish color than you get from most gaming peripherals.

Logo aside, there’s a subtle “ringed” texture to those chrome plates as well, even subtler than that found on the G Pro X. The pattern catches and refracts the light in interesting ways, and there’s a pleasant friction to dragging your fingers across the seemingly smooth metal.

Truly, I can’t stop admiring the Virtuoso, can’t stop wanting to devote whole paragraphs to things like, “Look at the hinges!” The hinges. Can we get any further into the weeds? And yet there’s a sophistication to the way they mimic the curve of the earcups until the last possible moment, then spiral upwards and inwards in one smooth motion. I expect that finesse from a Sennheiser, an Audio-Technica, or really any audiophile-grade headphones. But from a gaming headset? This level of craftsmanship is rare, and worth dwelling on.

But to avoid spending all day discussing the most minute of details, let’s just say it’s a gorgeous product and move on.

After all, looks are only one facet of a headset’s quality—and arguably the least important. The Virtuoso is a fairly comfortable headset, albeit less plush than you might first expect. There’s ample padding on both the headband and ears, but it compresses down quite a bit. As a result, I’ve found the Virtuoso’s earcups feel a bit shallow compared to, say, the cavernous reservoirs on the Astro A50. The tips of my ears juuuuuust barely scrape against the drivers, which is always a weird feeling.

That aside, the fit is good. The Virtuoso’s a bit tight straight out of the box, but I found it loosened up considerably within a few days. Within a short while it’d reached the desired equilibrium, firm enough to stay in place without squeezing the jaw or temples. Plus the ears are leatherette, not the scratchy sports mesh Corsair uses on the Void line.

The Virtuoso’s pivoting earcups are a boon as well, as they swivel both forward and backward. It sounds simple, but most headsets only do one or the other—if they rotate at all. While it’s mostly helpful when you want to rest the Virtuoso around your neck, enabling the earcups to lie flat against your chest, it also improves fit by allowing the headset to contour to your head. And as a side benefit, that firmer seal results in better passive noise cancellation.

Built-in controls round out our discussion of the Virtuoso’s physical body. On the left ear you’ll find an optional 3.5mm jack, as well as a USB-C port for charging—and for high-resolution audio, if you’re willing to go wired. I’d rather stick with wireless, but the option is available.

On the right ear you’ll find the power switch, which actually swaps between wired and wireless modes, plus a sizable diamond-patterned volume wheel. And where’s mute? There’s a small button on the microphone itself, a novel approach that’s definitely taken some getting used to. I can’t say it’s my favorite solution, but after some adjustment I admit it’s less cumbersome than reaching behind my head to any of the standard mute button positions.

You’re spending over $200 on a headset though, so it better sound phenomenal, right? This premium price tier has been all-but-abandoned by most companies, barring Astro’s A50 and SteelSeries’s Arctis Pro. Seeing Corsair enter, I was hoping for something good.

And the Virtuoso mostly delivers. First, a caveat: Corsair loves to push the upper end of the frequency range. Most gaming headsets allow bass to dominate, but here it’s gunshots, footsteps, floorboards, cymbals, and other high-pitched noises that sit forward.

On the plus side, these are tactically important sounds. If you’re playing a lot of competitive games, you want to hear where those gunshots are coming from. You want to hear the person sneaking up behind you. There’s a definite benefit.

It’s tiring though. Ear fatigue is more prone to set in when listening to higher-pitched or harsh sounds, and I usually find Corsair’s default sound profile exhausting, given my job involves using headsets for hours at a time. This has been an issue of mine with Corsair’s headsets going back to the Void and even the H1500 before that.

Thus I recommend downloading Corsair’s software and rolling off some of the treble frequencies, maybe 4K Hz and higher. Give the EQ a bit of a bass boost on the other end and you’ve got a much more listenable headset for day-to-day use. It’s never going to be a bass-heavy headset, but that’s fine with me. I just want something flatter or more natural-sounding.

The good news is the Virtuoso is pretty flexible and can handle a fair amount of EQ tweaking. Too much and certain frequencies will start to distort, but you can get some wildly different sounds out of the Virtuoso with minimal effort.

It’s just a shame, given the Virtuoso’s more neutral appearance and high price, that Corsair’s gone with the same gaming-centric profile as its previous headsets. Sure, that’s their target audience—but I’d still like to listen to music on my $210 headset occasionally, and the Virtuoso simply isn’t a great experience in that regard.

What Corsair lacks in output though, it makes up for in input. I was taken aback by the Virtuoso’s microphone at first, namely its size. It’s enormous, a thick and heavy cylinder on the end of a delicate-looking arm. Corsair calls it broadcast-quality, and you know what? It reminds me a bit of the Sennheiser mics I have kicking around. Maybe not in size, but certainly in appearance. There’s something timeless about it.

Anyway, it sounds great. The increased size means a better pickup, particularly in the low end. That in turn means warmer and more natural chat, without the telephone quality you get from some gaming headsets. To be fair, headset mics have improved a lot in recent years and the Virtuoso isn’t as far ahead of the pack in 2019 as it might’ve been in 2014, but it’s still one of the better-sounding options available.

It’s not a flawless debut for Corsair’s new flagship. I’d like to see a move away from the treble-heavy sound in a future iteration, and maybe the addition of more padding to the ears.

Still, I hope Corsair heads further in this direction going forward. The Void line is great insofar as it allows people to get a wireless headset for cheap, and that’s worth applauding. Those who want something better, however, have had to look elsewhere for a long time. At long last, the Virtuoso provides a worthy companion to the K95, the M65, and the rest of Corsair’s high-end hardware, for those who want a matching set. Pricy, sure, but oh-so-fancy as well.