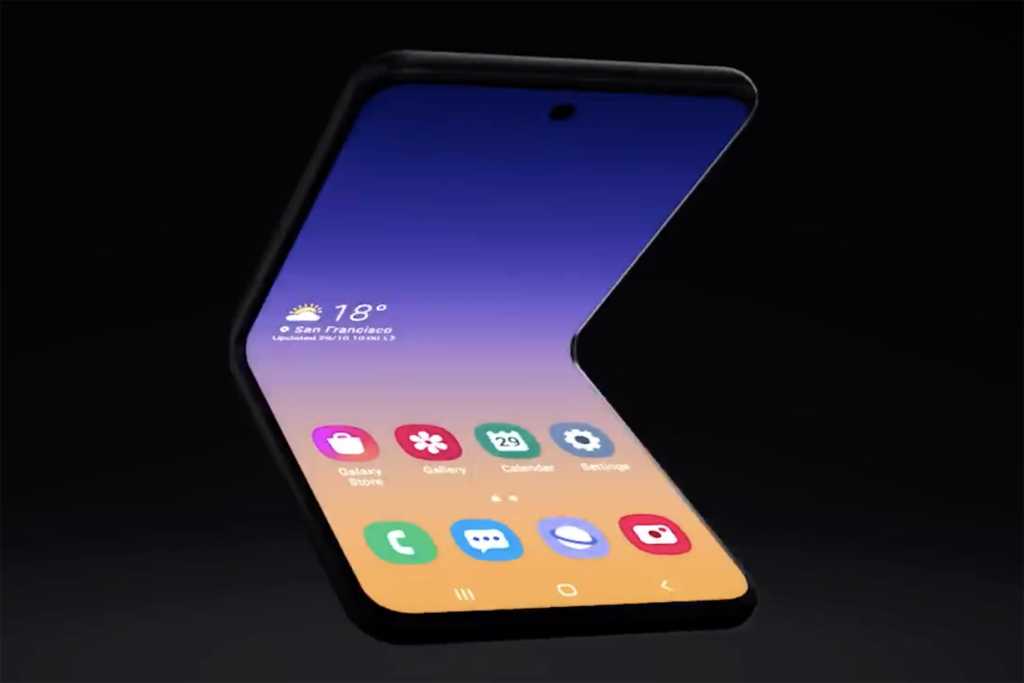 It’s been a rocky 12 months since Samsung first teased its folding phone, with a sneak peek at the Infinity Flex display at 2018’s developer’s conference. But that’s not slowing the company down. At 2019’s keynote on Tuesday, Samsung showed off a new display concept that flips the folding phone concept on its head. Literally.

Update 10:50: This post has been updated with a new tall-screen rumor, the Moto razr.

The new display folds open like a wallet, rather than a book, to reveal an ultra-wide inside screen. I’m not talking about a 16:9 phone like the Sony Xperia 1. Think more 25:9, like the candy-bar phones of old. Just, you know, with no buttons and a very tall screen.

To promote the new concept, Samsung touted the device will “easily fit in your pocket” when folded. When opened, Samsung says the tall form factor “changes the way you use your phone.”

Keep reading to find out why this simply won’t work.

The rise of tall phones

Samsung’s not the only phone maker teasing a ridiculously tall phone. Earlier this month Essential teased a “radically different form factor” with a picture of a handset that looked more like a remote than a phone. It showed off a few teaser images with a tile interface, skinny apps, and a experience built to “reframe your perspective.” Then on Thursday, Evan Glass tweeted out an image of what looks to be a folding Moto RAZR reboot with, you guessed it, a seemingly very tall inside screen.

I have no reason to doubt Samsung or Essential’s claims. But that doesn’t mean I have to agree with them. While a square handset would certainly fit in more pockets than something as big as the massive Galaxy Note 10+, that doesn’t speak to how easy it is to use when opened (or closed, but that’s another issue).

If there’s one universal fact to every phone that released in 2019, it’s that we can pick them up and instantly start using them. There’s no learning curve and no confusion. Even Samsung’s Galaxy Fold stuck to the same basic formula with its phone-to-tablet transformer.

But this new folding Galaxy Whatever is something else altogether. It doesn’t open to a bigger screen that lets you be more productive. It opens to a taller screen. I can’t even begin to comprehend how to use it with one hand, let alone the logistics of landscape mode. It’s a classic example of form trumping function.

Comparisons will immediately be made to the RAZR flip phones and the Nokia 8110, two phones that conjure nostalgia of the pre-smartphone days. Each groundbreaking in their day, they popularized the tall-and-skinny form factor with unique designs incorporating sliding or flipping mechanisms.

But while I’ll always remember my RAZR with fondness, I’m not looking for another one. The flip phone had its day and its purpose, but an all-screen phone that unfolds the same way doesn’t make sense. I may have issues with the Galaxy Fold, but at least I can understand the point. Its tall-concept sibling, not so much.

If the physical size is confusing, think about the apps. It’s hard enough to get Android developers to format their apps properly for notches and 19:8 displays. Now Samsung and Essential expect thousands of developers to dramatically rethink their user interfaces for products that will likely be flashes in the pan (or just plain panned).

Assuming it runs a version of the same Android we know now—which seems likely given Samsung’s full-court One UI press—apps will need to be completely retooled lest they look ridiculous. The current versions of apps like Maps or Mail will be nearly impossible to use, and typing will be a nightmare. I don’t even want to think about games.

It’s no secret that we’re at something of a crossroads when it comes to smartphones. For the better part of a decade, phones have been getting bigger, with more screen, fewer buttons, and less bezel, culminating in 6-inch-plus handsets that pick up fingerprints as fast as they speed through tasks.

But as the new decade approaches, the way forward for smartphones is less certain than ever. There very well may be a new form factor on the horizon that changes everything, like the iPhone did. But we’re probably going to have to suffer through a few stopgap designs before someone nails it.