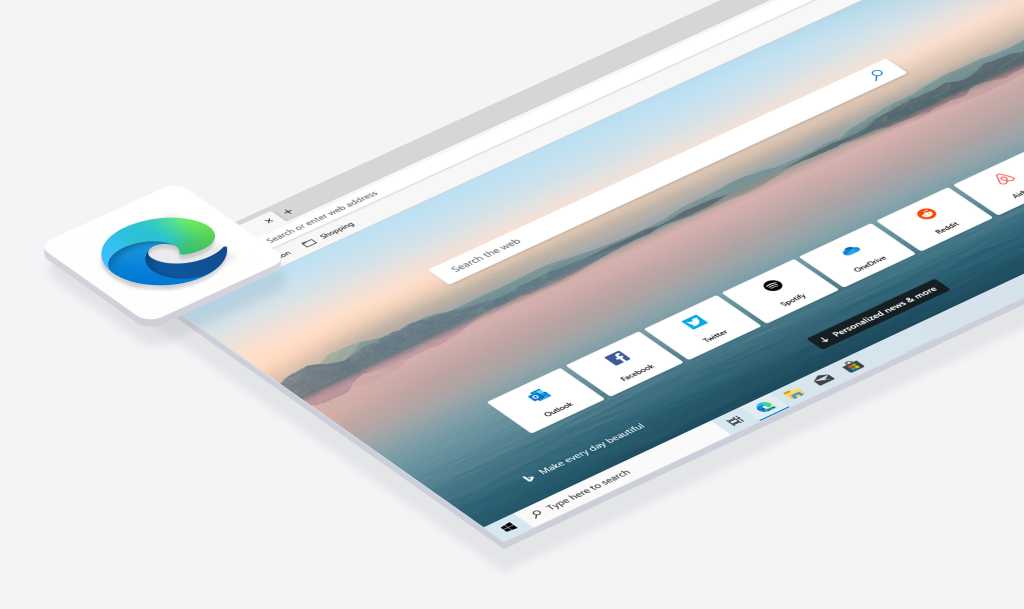 Microsoft plans to announce a boatload of new capabilities to Office, search, and Edge at its Ignite conference Monday, including rollout plans for its Chromium-based Edge browser, a tool to read your email aloud in the Outlook app, corporate insights driven by Microsoft Search, and more. But subtle improvements like natural-language queries in Excel may prove more significant.

Microsoft has arguably struggled to align search and the web with its traditional Office silos of spreadsheets, presentations, and documents. Now, executives say they’ve cracked the problem.

Microsoft hasn’t lost its idealistic view of the Internet, dating back to Internet Explorer’s “beauty of the Web” campaign. But today, the web provides more opportunities and more challenges to solve, said Yusuf Mehdi, corporate vice president in charge of Microsoft’s Modern Life & Devices Group, in advance of Ignite. Mehdi recounted the problems Microsoft was trying to solve: How do you protect privacy and still maintain personalization? How do businesses bring together the web and their own knowledge into a cohesive whole? How does Microsoft apply its own tools, like Edge and Bing, to those goals?

This week Microsoft will lay out many, many new features across Office, search, and the cloud to do just that. We’ve had a look at them, then we whittled them down to the 10 new things we think you’ll want to know about.

The new Microsoft Edge is official

The big addition is what Microsoft has dubbed the “new” Edge, or the “next” Edge: a Chromium-based version of its browser that has a new logo, too. Announced earlier this year, the new Edge browser feels fresh and fast. Mehdi said a release candidate will be published at Ignite, with a final version slated for January 15. Edge development is decoupled from Windows, so that new versions of Edge will be released on its own timetable. Microsoft’s goal is to meet or even out-hustle Google, with new versions due every four to six weeks for “every platform that matters,” Mehdi said: Android, iOS, MacOS, Windows 7, and Windows 10.

New PCs will, at some point, simply be pre-loaded with the new Edge. Microsoft hasn’t quite specified how existing PCs will be handled, but it seems that one will simply replace the other.

At Ignite, Microsoft will also show off Collections, which Microsoft showed off at Build earlier this year. Collections allows you to bookmark a series of web pages or text into a Collection. What’s interesting about it, though, is if you export it using the ellipsis menu, the metadata (name, price, rating, et cetera) can be automatically formatted into a spreadsheet for tracking or comparison purposes.

Like the current Microsoft Edge, legacy sites architected for Internet Explorer will be viewable in a tab.

For years, Microsoft has cast about for the right way to offer insights into coworkers. Should it be Delve? Outlook Groups? Some combination of the two? Now, that information is accessible via Microsoft Search, the business “look” of Microsoft Bing.

Like Bing, you’ll be able to use semantic search for natural-language queries. According to Mehdi, much of this information should still be in Delve, as well as in Microsoft Search; they serve distinct roles, according to Microsoft.

An entirely new service, which Microsoft is calling “Project Cortex,” goes a bit farther. Cortex pulls information from unstructured content like legal contracts and employee agreements, and automatically adds metadata and classify topics into objects, allowing them to be more easily shared.  All of these new “Project Cortex” capabilities are available in private preview for now.

The message here? “We’re able to make enterprise search as easy as searching the Web, and like Yusuf said earlier, we’re uniting work and Web results together in a single experience,” said Jordi Ribas, the corporate vice president of Bing and AI products at Microsoft, in an interview.

Microsoft has also decided that when a user wants to browse privately, they should be able to search privately, too. Windows Search now will disassociate itself from your account, so that your search and InPrivate search history won’t be tied to your identity. (Other search providers don’t do this, Microsoft claims.) Cookies won’t be saved, and your history won’t be logged. Everything is deleted once you close the InPrivate window, Mehdi said.

If simply making users aware of new features is one challenge, so is helping them take advantage of Microsoft’s artificial intelligence. Excel used to feature “Insights,” which was supposed to extract meaning from your data. “Ideas” (Home > Ideas) supposedly performs a similar function. Neither works especially well with the type of data I’ve used. (Ideas for Word, which Microsoft announced at Build, is rolling out now to commercial customers, with AI-powered grammar checking and inclusive language.)

Now, Microsoft’s taking a different tack. The search bar at the top will work in a Bing-like, conversational manner—you should be able to ask natural-language queries and receive useful information in return. It’s rolling out to Office Insiders at the moment. We’ll see how this works in practice; as they say, your mileage may vary.

If that’s not enough, you’ll also be able to make natural language queries within Microsoft Search against PowerBI data that’s also stored in your organization, according to Microsoft’s Ribas. “The idea here is leveraging all the search algorithms of Microsoft for the web, and the Microsoft Graph—which is unique to us—we’re able to make enterprise search as easy as searching the Wweb,” he said.

You may be familiar with Format Painter for Excel: Once you’ve nailed down a few cells just so, you can “paint” that format onto others, without really knowing what you’re doing. Office Scripts takes that to another level, in that you can essentially record a macro of your actions in a notebook and then apply them to others. Scripts can be stored in OneDrive, shared, and combined with up to 300 connections and actions, Microsoft says. It will be in public preview for the web by the end of the year.

Very few of you have probably used Windows Device Application Guard (WDAG), a protected browser within Windows that walls off your computer via virtualization. We’ve previously wondered whether virtualization could be used elsewhere within Windows. In Office 365 ProPlus, it will.

O365 ProPlus will wall off untrusted Word, PowerPoint, and Excel spreadsheets within a virtualized container. If the file hides malware, your PC will be protected automatically. (Labeling it as trusted will trigger an additional check against the Microsoft Defender Advanced Threat Protection threat cloud.) Application Guard shouldn’t require any manual administration—and that’s a good thing. Microsoft says this is in limited preview and should roll out in 2020.

If you typically open those apps in the Office mobile app for Android or iOS, there’s a new Office app that is designed to serve as the focal point for mobile document creation and editing, much as the mobile Outlook app houses both email and its calendaring application.

Today, the desktop Office app doesn’t do much more than supply shortcuts to recent Office documents and apps, as well as account management. The mobile Office app sounds much more capable, though we haven’t see it in person yet.

“Users will also be able to do a variety of common on-the-go tasks, such as converting images to text, creating and signing PDFs, and sharing files between devices,” Microsoft says. The new mobile Office app will enter public preview for iOS and Android on November 4.

Outlook’s receiving a bunch of new features: Play My Emails, Meeting Insights, a new meetings scheduler, Cortana’s daily briefing, and even improved Message Recall. What’s significant is that many of those new features are coming to the Outlook mobile app, too.

One of the highlights of Microsoft’s Inspire keynotes may be Play My Emails, reminiscent of the smarter, context-aware Cortana shown off in May. This new feature appears to be constrained to Outlook, however, specifically Outlook for iOS, and goes live for iOS on November 4.

Microsoft describes Play My Emails as a “voice-forward feature that intelligently reads out your email and shares changes to your day— ideal for commuting or multitasking—helping you get time back so you can focus on other things.” You’ll be able to reply to emails with simple voice commands and easily navigate messages with new, larger tap targets optimized for mobile use, Microsoft said. Play My Emails also allows you to adjust Cortana with a new voice option that uses neural voice technology to sound more natural.

Separately, Microsoft is also cracking down on what mobile data can be accessed via a corporate and personal email account. Even Outlook lock screen notifications will be encrypted until unlocked, Microsoft says.

On the desktop, Outlook is also adding support for Meeting Insights, a feature called “Up Next,” and inferred locations, all of which are designed to help manage your day. If you add a personal calendar, users will be able to see what time you’ve blocked out for a dentist appointment, for example, and not schedule over it. Travel times will also be accounted for (which Cortana did years ago). It sounds like relevant email conversations and files will automatically surface in anticipation of your next meeting. They’ll all be available by the end of the year.

Cortana, now less a digital companion than an office assistant, now can automatically book your meetings with Scheduler, yet another tool for tracking down open times on shared calendars. Do you remember how Cortana used to be able to display your day, together with relevant information, when you clicked her icon within Windows? That’s being replaced with a summary “briefing email” from Cortana, which is now available in preview for Microsoft 365 subscribers.

Finally, Microsoft’s touting Message Recall, the ability for “users… to recall messages they’ve already sent.” Does this mean that a user using Outlook will actually be able to “disappear” an email that was previously sent, even if it lands in a public folder, or Gmail, or has already been opened? We’ll see.

MyAnalytics handles your Out of Office messages

Heck, if you’re a Microsoft 365 commercial customer already enrolled in MyAnalytics and Workplace Analytics, the service will automatically schedule an out-of-office notification if it knows you’ll be unexpectedly delayed or otherwise occupied.

MyAnalytics, Microsoft’s other personal productivity assistant—sorry, Cortana—will also automatically cancel meetings, schedule “catch-up” time when you return,  and check up on how well you’re sticking to your agenda. No rest for the wicked!

Microsoft also said that OneNote 2016 isn’t quite dead yet. Mainstream support has been extended indefinitely, complementing the existing OneNote app already in Windows. Dark mode and “@mentions” will also arrive for OneNote users and Office 365 subscribers next year, Microsoft said.

Whiteboard is now a web app, which can be easily downloaded.

Finally, Yammer is being overhauled, with a “beautiful, intelligent experience” that connects to Teams, SharePoint, and Outlook. Select customers can see the new Yammer in a private preview scheduled for December, Microsoft said. It’s due to roll out to all customers in 2020, part of what Microsoft hopes will be the “Year of Yammer.”

This story has been updated at 9:13 AM on Nov. 12 with some clarification of Project Cortex.