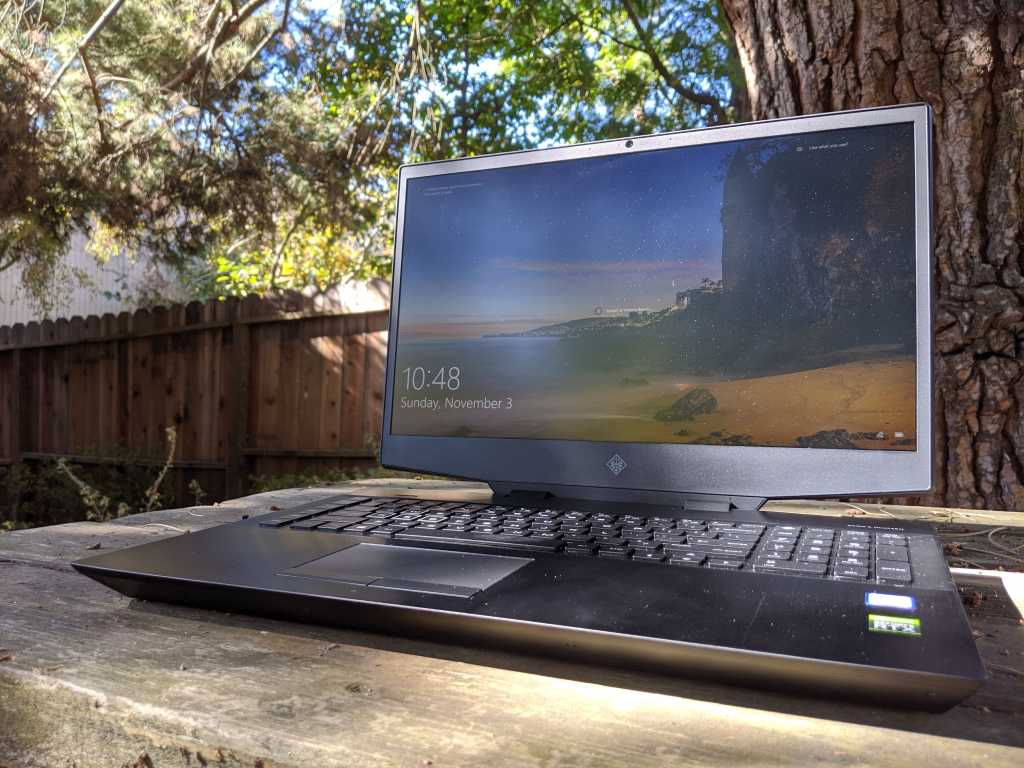 HP’s Omen 17 has a reputation as a solid performer at a budget price, and its 2019 model follows suit. It’s heavy and the battery is a bummer, but a full RTX 2070 at this price? Believe it.

HP’s Omen 17 gaming laptops have a reputation with us that can be summarized in four words: solid performance. Shockingly affordable.

That’s particularly true for the Omen 17. Is it a looker? Debatable. Is it the best gaming laptop? Definitely not. But HP always manages to cram more hardware than you’d expect under the hood, then sell the Omen 17 way below market rate.

I’m not sure how HP pulls off this bit of wizardry, but it’s made the Omen 17 a hit. And the trend continues, as the 2019 model we’re testing (poetically monikered the 17-cb0040nr) packs in some of the latest and greatest CPUs and GPUs for hundreds of dollars less than the competition.

Okay, latest and greatest might be a bit of an overstatement. The Omen 17 we reviewed (available on Amazon) is an mid-tier gaming laptop with an Intel Core i7-9750H, an Nvidia GeForce RTX 2070, 16GB of DDR4 RAM, a 250GB NVMe SSD system drive, and a supplemental 1TB HDD.

The Omen 17 is a good-looking laptop. It’s a bit aggressive for my taste, but HP has a way of bringing elegance to its game-centric designs. I admired that ability when reviewing HP’s Mindframe headset (available on HP.com). While I think the Omen 17’s heft works against it, there are still some alluring elements.

The centered hinge is the major one. It’s the feature that caught my eye the first time I opened the Omen 17. Even now, writing this, I’m still impressed by it. Other laptops have done the single centered hinge, but the Omen 17’s implementation has a lightness, an airiness to it, that belies the laptop’s actual weight.

That weight is significant. The Omen 17 is pretty average-sized for a 17-inch gaming laptop, at 15.9 x 11.6 x 1.1 inches—maybe even a bit slim, considering there’s a full-size RTX 2070 inside. The Omen 17 is dense though, weighing in at a whopping 7.2 pounds. The power brick exacerbates the issue, measuring nearly a foot long and an inch thick, and adding another 1.6 pounds to the total package.

Call it the elephant in the room, and we’ll acknowledge it right here. The Omen 17 is a great laptop, but when asked to pick two from the list of “Fast,” “Cheap,” and “Portable,” HP sacrificed portability.

Okay, so it’s a good-looking laptop as long as you admire it while it’s resting on a desk, where it belongs. It’s mostly plastic, but HP uses brushed textures on the lid to add some character. I remain a fan of HP’s minimal branding: Like most Omen products, it doesn’t actually say HP anywhere on this laptop. “Omen” is inscribed on the hinge, and the lid has the fierce-faced Omen logo. But that’s it, as far as branding.

Pop open our review model and you’re treated to a 144Hz, 1080p display. Color accuracy skews a bit warm, but it’s a surprisingly good screen for a budget-friendly laptop. Brightness often suffers on these midrange laptops, but HP’s opted for a radiant 362-nit display. The other display options are a 60Hz 1080p, a 4K IPS, and the 240Hz 1080p mentioned above.

An upgrade for 2019, the keyboard now has zone RGB backlighting instead of the flat red found on previous Omen models. Say what you will about RGB, I’m always on board when it means getting away from a forced red-and-black color scheme. The new Omen 17 has four zones: left, right, center, and then the WASD keys.

HP fits a full-size keyboard onto the Omen 17, with room to spare—and even a column of macro keys to the left. It’s a bit cluttered, but there’s a lot of functionality at your fingertips if you want it. The switches surprised me as well, with a hearty thonk to each keystroke that I’ve really come to love over the last few weeks of testing. The resistance is a bit stiff, which can be exhausting after a while, but I think next to Alienware this is one of the best laptop typing experiences I’ve had.

Kudos to HP for including actual buttons underneath the trackpad. That’s increasingly rare these days. Alienware, for instance, abstained. Sure, you’re probably going to plug in a mouse for any serious gaming, but sometimes you simply can’t, and it’s always best to have the button option. I find it nearly impossible to use a clickpad for on-the-go gaming, but with buttons? I can make do.

Accolades as well for putting all the ports on the side. Rear-facing ports are common on these oversized laptops, in part because it reduces cord clutter when a laptop’s desk-bound. Problem is, rear-facing ports are a huge annoyance when traveling. They’re hard to access and hard to orient when working in close quarters. The Omen 17 crams in power, ethernet, HDMI-out, Mini DisplayPort, two USB-A, a USB-C, and dual 3.5mm headphones and mic jacks all on the left side. The right houses a modest SD card reader and an additional USB-A port.

The rear? All fans, the way it’s meant to be.

You’re probably not buying the Omen 17 for its looks, though. Also remember our review unit sports a full-size RTX 2070, not the Max-Q model we’ve reviewed so often this year. It makes a difference.

More on that later, though. First, let’s take a look at our CPU tests. We’re very familiar with the Core i7-9750H at this point, so anomalies are glaring—and there are some here. We use Cinebench to test both single-core and multi-core performance. This being a short-burst test, it’s mostly good for gauging top-speed performance. The Omen 17 slots in right alongside its peers, albeit on the lower end.

Trouble brews during our CPU stress test, where we measure how long it takes the laptop to encode a 30GB MKV file down to the “Android Tablet” preset, using the free HandBrake utility. Here, the Omen 17 falls well outside the margin of error, taking nearly five minutes longer than the competition. That’s pretty shocking, considering the Omen 17 is both larger and heavier than laptops like the MSI GS65 Stealth. You’d expect the Omen 17 to have better cooling.

Does it matter for gaming? Probably not. Most games are still constrained by the GPU, not the CPU. Still, there’s cause for concern. Heat dispersion is one of the biggest challenges laptops face, and the Omen 17 isn’t doing a great job combating it.

Let’s get into GPU performance. Here, HP does have an advantage, if only because of that full-size RTX 2070. Sure, it’s bulky. Sure, it’s hot. Check out these numbers for 3DMark’s TimeSpy 1.1 benchmark though.

HP’s implementation isn’t quite as zippy as the one for MSI’s GE65 Raider, a shortcoming we can likely put down to heat again. It handily beats out the 2070 Max-Q though, and comes damn close to matching the 2080 Max-Q as well. Lest we forget, this is a $1,600 laptop. That’s as cheap or cheaper than most 2070 Max-Q models. Not too shabby.

Gaming benchmarks tell the same story, as evidenced by the Omen 17’s performance in Rise of the Tomb Raider and Middle-earth: Shadow of Mordor. Again, it’s not the best 2070-equipped laptop we’ve laid hands on, and the gap here is narrower than it was in 3DMark FireStrike, but it still slightly outperforms the 2070 Max-Q in both cases.

If the Omen 17 has a major shortcoming, it’s battery life. Our battery rundown test involves looping a 4K video file with the laptop display set at 250 nits brightness, headphones plugged in, and the volume set to 50 percent. Under those conditions the Omen 17 lasted just a hair over two hours, a pitiful showing matched only by Lenovo’s budget-friendly Legion line.

Still, for the money? It’s hard to knock the HP Omen 17. That’s been our verdict for a few years running now, and it suffices for 2019 as well. It’s neither the lightest laptop nor the fastest, but HP’s made smart choices when it comes to kitting out this bargain build. A better battery, proper RGB lighting, and a reduced size would be welcome revisions—but then it wouldn’t be the Omen 17, and it doubtless wouldn’t come in so cheap.

Sometimes it’s better to appreciate what you have, by which I mean: a damn fine laptop, and a couple hundred dollars in savings.