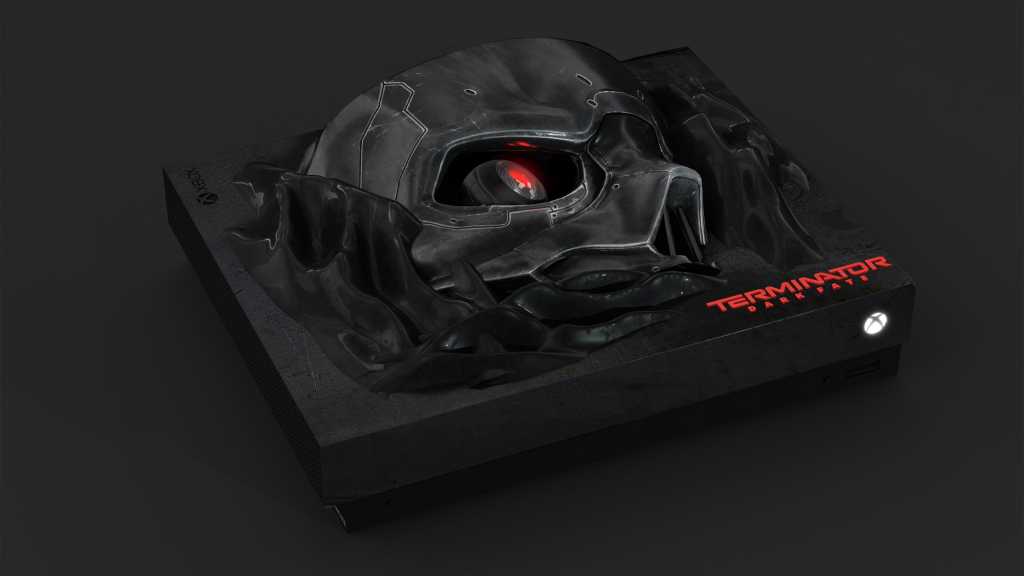 When the AI grows sentient and Skynet becomes a reality, at least we’ll have been prepared by the nonstop onslaught of Terminator tie-ins this year—not least of which is the custom Xbox One X that Microsoft revealed this week. Look upon its eye and despair, for there is a new red ring of death to contend with.

That news, plus Red Barrels teases Outlast 3 (or maybe something else), Red Dead shows off its PC graphics some more, Death Stranding’s coming to PC next summer, and Netflix finally puts out a real trailer for The Witcher. Spoiler: It’s both better and worse than I expected, same as every bit of marketing for this adaptation.

This is gaming news for October 28 to November 1.

Halloween’s over, which for me means getting ready for Thanksgiving, and for department stores means it’s time to bust out Christmas ornaments. But before we get too far into the holidays, Epic is still celebrating the spookiest season with a pair of giveaways this week. Both Soma and Costume Quest are modern classics, and you owe it to yourself to grab both even if you’re burned out from a month-long horror binge.

Next week is Nuclear Throne and Ruiner, which doesn’t sound very Thanksgiving-y to me. Then again, I can’t think of any Thanksgiving games off the top of my head. An underserved market, maybe.

If you’re okay with less-finished fun, there are also multiple betas running this weekend. Warcraft III: Reforged is running a multiplayer beta, with rolling waves of invites going out first to those who preorder the “Spoils of War” edition and later to anyone who pre-orders period.

And Halo: Reach enters its third round of testing this week. You’ll need to sign up as a “ Halo Insider” and then hope for an invite, but those selected will get to test two missions (“Noble Actual” and “Winter Contingency”) and play a handful of multiplayer maps. You can also check out the minimum specs for running Reach in 2019. As you’d expect, they’re pretty damn low. A GTX 770 will get you to 4K, albeit barely, while a GTX 560 Ti is listed as the minimum for 1080p play.

Death Stranding is coming to PC in “early summer of 2020,” as revealed this week. Quick, cancel your PS4 preorders—and then settle in and watch this latest trailer, I guess, as that’s our lot for the next nine months while everyone else is…climbing ladders, or whatever the hell it is you do in this game. I don’t know and honestly I’m not convinced I care, but hey, it’s encouraging to see a Sony-backed game like this come over to PC. Maybe a sign of more to come?

Speaking of PC ports, Red Dead Redemption II finally hits PC next week. I’m sure you can imagine the improvements for yourself, all those glorious horse testicles growing and shrinking at 4K resolution. But if you want to take a peek ahead of time, Rockstar’s put out a very pretty PC launch trailer to entice you into buying a (second) copy.

Valve finally released its long-awaited Steam Library Update as a beta branch in September, and I’ve been using it ever since. It’s fantastic, and whenever I’ve found myself on a computer without the beta branch active these past few months, I’ve cringed. Luckily that’s a thing of the past though! As of this week, Valve’s pushed the new library to everyone on Steam.

Go ahead, admire it. It’s been a long time coming.

Epic has a knack for timing its own store updates to Valve’s. No surprise then that the Epic Games Store discussed a handful of improvements this week—though probably not the ones you’re waiting for. Actually, the first is one of those “wait, this didn’t exist yet?” improvements, as Epic added genre filters to the store.

Wishlists are also coming soon, per Epic’s announcement. And while Epic still seems against user reviews, it did reveal a partnership with OpenCritic to surface review scores on the storefront. You can find more details here.

Square’s Avengers game is due out May 15 and I feel like we’ve barely seen it still. Or rather, we’ve seen the same section over and over, the prologue battle on the Golden Gate Bridge. For a second I feared this latest trailer would recap that for the umpteenth time, but it does dive deeper into the loot system and such in the back half. Still not much given the looming release date, but at least it’s something.

Battlefield’s been on an every-other-year schedule for a while now, but don’t expect Battlefield VI to come knocking anytime soon. EA’s Andrew Wilson got out there in an investor’s call this week and said we won’t see the next Battlefield until sometime in 2021 or maybe even 2022. That’s a three- or maybe even four-year gap between releases, which hopefully allows DICE to make more substantial changes—and maybe even a longer campaign? I can dream.

Ubisoft’s made a habit of rescuing its bad games this generation. It salvaged The Division, it turned Rainbow Six Siege into a phenomenon, and now it’s trying to fix Ghost Recon Breakpoint. There’s a very long blog post to that effect over on Ubisoft’s site, but the key point is that Ubisoft is “working on a more radical and immersive version of Ghost Recon Breakpoint.” What that means is up in the air, but I’ll be curious to see what Breakpoint looks like a year from now, given Ubisoft’s track record.

Okay, one last bit of Halloween-adjacent news: Red Barrels, developer of Outlast, used the day to tease its next project. All we got was one image, two hands clasped together and the words “Where freedom ends.” Is it Outlast 3? Maybe. I promise, you know just as much as I do. We’ll keep an eye out for more, because as much as I felt disappointed by Outlast 2, I’d still love to see Red Barrels recapture the oppressiveness of the original.

Forget the next Xbox. All I want is the ridiculous Terminator-themed Xbox that Microsoft revealed this week. Usually these tie-ins are bland affairs, a color-swap and maybe an alternate logo to promote some game or another. The Terminator: Dark Fate Xbox is a full custom mold though, with a melty-faced and red-eyed robot sticking out from the top. It is so ugly and so dumb and I’d love to put one in my house—but they only made one, and you have to win it in a contest. Damn them.

We’ll finish out this week the only way we could possibly finish out this week: with the debut trailer for Netflix’s adaptation of The Witcher. Does it look better than I first expected? Slightly. Is bathtub-Geralt a neat nod to fans? Definitely. But does it look good? I’m…still not sold. At times it looks like the Game of Thrones spiritual successor it so desperately wants to be. Other points, it looks like The Witcher by way of The CW.

So we’ll see, and see soon I guess. The Witcher is due out December 20.