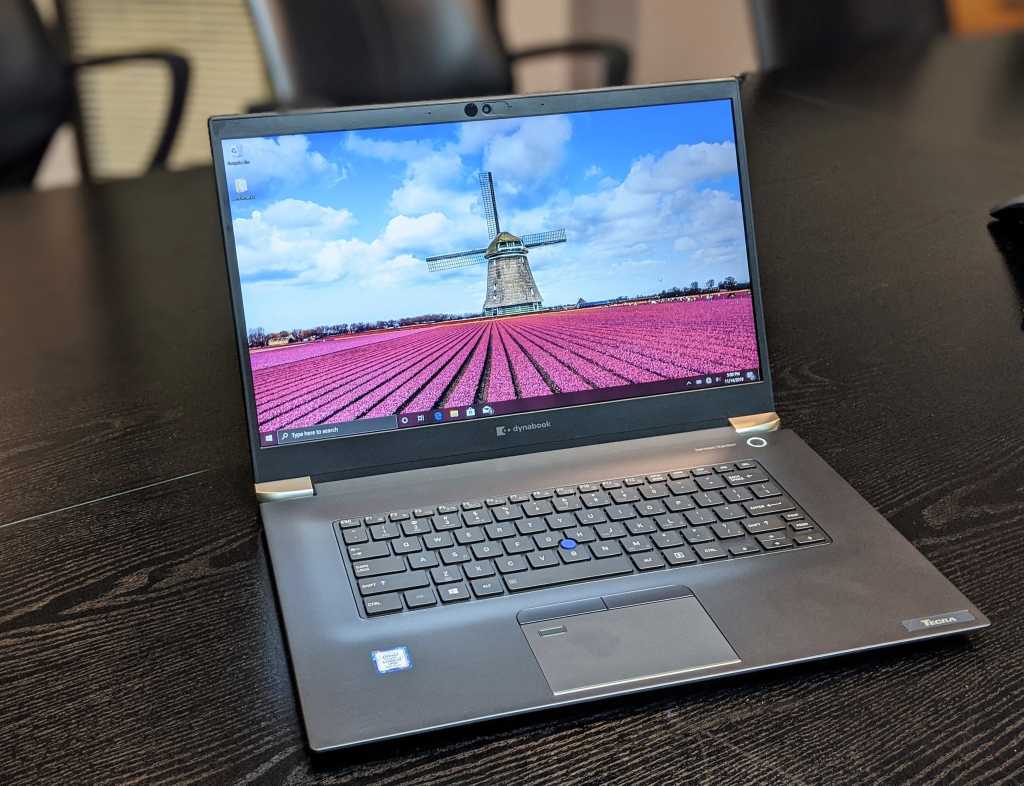 Dynabook’s Tecra X50-F is a large, lightweight, 15-inch notebook PC. But a busy fan, some hardware issues, and a scant eight hours of battery life pull it up short of the competition.

On paper, Dynabook’s Tecra X50-F 15.6-inch business notebook looks like a pretty solid buy, with an attractive mix of features. Now majority-owned by Sharp, which took over the company in 2018, Dynabook’s product announcement earlier this year impressed us with its emphasis on large, lightweight business machines.

As the first out of the gate, however, the Tecra X50-F suffers from various small problems, overall lacking the polish of its rivals. It also barely avoids the cardinal sin of less than eight hours of battery life.

A note on pricing: Late in the review process, we were informed that Dynabook sent us a build-to-order model instead of one of the standard Tecra X50 configurations. The unit we originally asked to review cost $1,544, which you can use as a reference point to inform your purchase of other Tecra X50s.

The Tecra X50-F design is a typical clamshell, folding back roughly 45 degrees off the horizontal. A pair of metal hinges accents the corners, securely holding the screen, which simply refuses to flop. Everything feels strong and sturdy, and yet the Tecra X50-F is surprisingly light for a 15-inch laptop.

Dynabook appears to have achieved the lighter weight in part through the plasticky-feeling magnesium alloy chassis. It’s likely a cost savings, as is the display, whose 262 maximum nits of luminosity is barely enough to pass our usability threshold.

While the design includes quite a bit of functionality, some of it seems clumsily executed. Tapping the power button lights the keyboard, but leaves the screen blank and seemingly powered off until a “Dynabook” logo swoops in. The dual biometrics include a front-facing Windows Hello camera that sometimes had issues recognizing me, forcing me to type in a PIN or password, or use my fingerprint instead. The fingerprint sensor is a “swipe” model, which experience has shown needs recalibration over time. The camera’s sliding shutter actually fell out of its track once, though I reattached it without issue and it didn’t fall out again.

One or two of these issues, in isolation, probably don’t matter. But when they all tumble out at you while you’re still sipping your first coffee of the day—yikes.

The fan’s also a little loud for my tastes. Under its default configuration, Dynabook’s fan flips on quite frequently. The frequency is adjustable in the Dynabook settings, although there doesn’t seem to be an option to enable a true fanless mode. Our unit also occasionally produced some faint whining similar to a rotating a hard drive’s chatter, though no such part was installed.

Ports and the typing experience

The Tecra X50 comes equipped with a pair of Thunderbolt 3 ports, which is important if you’re considering adding multiple monitors. There’s an HDMI port, though that’s only capable of driving an external 4K monitor at a minimal 30Hz refresh rate. Dynabook shipped us an external Thunderbolt dock to compensate (it’s not bundled with the laptop), with a miniDisplayPort capable of driving the display at a comfortable 60Hz.

Typing on the Dynabook Tecra is a mixed bag. Its small, chiclet keys were surprisingly pleasant to type upon, though I made a number of mistakes while my fingers adjusted. There’s scant travel in the keys, though they’re resilient and provide a comfortable landing pad. The spacebar is also narrower than normal, in part because of a second Ctrl key in the bottom row. I found this particularly annoying.

While the Tecra’s keyboard hides quite a few options, they’re somewhat poorly implemented. All of the secondary function labels are faintly printed and difficult to find. Dynabook also made some odd or simply poor design decisions, such as placing the volume controls in the second, numerical row of keys, rather than next to the audio “mute” key in the function row. The page-up and -down keys, which tend to wander across various laptop designs, are down near the cursor keys at the bottom of the keyboard. The backlighting is wan.

The most noteworthy addition is the traditional Tecra/ThinkPad-like pointing stick or joystick in the middle of the keyboard, which can supplement a mouse, touchscreen, or touchpad. By default, though, the pointing stick’s traversal across the screen is slow, so you’ll have to dig through the settings to adjust it.

The Tecra’s precision trackpad is medium-sized, smooth, and mostly navigable across the entirety of its surface. A pair of Tecra-style buttons at the top of the trackpad provide additional input options, though the middle button that appeared on 2013’s Tecra Z50 has disappeared. I noticed, however, that the trackpad accumulated a lot of smudges that were hard to clean off.

I’m usually in favor of audio enhancements on laptops, but on Dynabook’s Tecra X50 it works both for and against it. Dynabook chose DTS Audio Processing, and it’s on by default. (There’s a graphic equalizer, though you have to set it yourself.) In general,  DTS enriched some live music I played back via the Tecra’s speakers. In one YouTube video, however—Kanye West’s “All of the Lights”—the DTS audio muddled the sound, adding a distracting “cathedral” resonant effect. In general, though, the Tecra’s speakers are sufficiently loud, with a decent range of sound with DTS disabled. The speakers themselves are licensed by Harman Kardon.

Dynabook’s utility software is a strength. While I don’t always choose to fiddle with my PCs, I appreciate options to do so. Like Lenovo’s powerful Vantage software, the Dynabook utilities are varied, deep, and useful. Is that fan annoying? While there’s not a silent mode, an “eco” option dials down the power consumption by downclocking the CPU, lowering the screen brightness, and largely turning off the fan—and it shows you how much power you’re consuming.

You’ll also have the option via the Dynabook Settings app to adjust features like whether the USB ports are always “on” to charge external devices, and more. If there’s any downside, it’s that Dynabook needs to employ a graphic designer to give the utilities a more professional look.

Performance: Solid numbers except for battery

We expect moderate to good performance out of a business notebook, with long battery life a key priority. Dynabook achieves the first, and struggles with the second.

We first run the PCMark 8 Work and Creative benchmarks. Though the test’s results are becoming less relevant over time, on the other hand, we have a number of reference points. Dynabook’s Tecra X50 garners one of the top scores among its group.

The Creative test measures light gaming, video editing, and photo manipulation, among others. Dynabook’s Tecra X50 again rises to the top of the pack.

In PCMark 10, which combines the disparate PCMark tests into a single, updated unified whole, Dynabook’s Tecra doesn’t perform quite as well.

We also compare how the Tecra performs in a short sprint. Cinebench, a benchmark published by the Maxon Corp., pushes all of the available processor cores while rendering a 2D scene.

HandBrake, an open-source tool, converts a Hollywood movie from one format to another, a prolonged exercise that helps stress the laptop CPU over time. It’s both a test of how the laptop cools itself as well as a way to measure how well the Tecra performs a useful real-world task. The X50’s results here are firmly midrange.

Though there’s little chance that a business notebook will be used for 3D gameplay, we test the GPU using the 3DMark Sky Diver benchmark. We don’t expect great things from the UHD 620 integrated GPU, and that’s okay.

Battery life, however, is where we apply a stricter eye. No matter how you cut it, a mainstream laptop should be able to run more than eight hours, with the screen on, performing various tasks. We use a fairly easy test, looping 4K video at a set display brightness, with earbuds attached and volume at 50 percent. Your mileage will vary, but the Dynabook Tecra X50 barely meets our eight-hour threshold, bringing up the rear of its competitive set.

We did notice that the Tecra X50 lowered its own screen brightness when testing on battery, something you could certainly do, too. We adjusted the screen brightness back up to what we think are acceptable working levels.

Dynabook’s up against a number of established business laptop lines, as well as consumer models that can be used interchangeably (minus the vPro management options that come with corporate models). Unfortunately it fails to stand out. While it’s certainly appealing from a size and weight perspective, functional aspects such as the noisy fan will probably wear on you over time. Performance varies, though its mainstream productivity scores are exemplary. The eight-hour battery life? You could swing it, but we believe a business notebook should do better.

Correction: According to Dynabook, the chassis is made from magnesium alloy. It is also colored Onyx Blue.