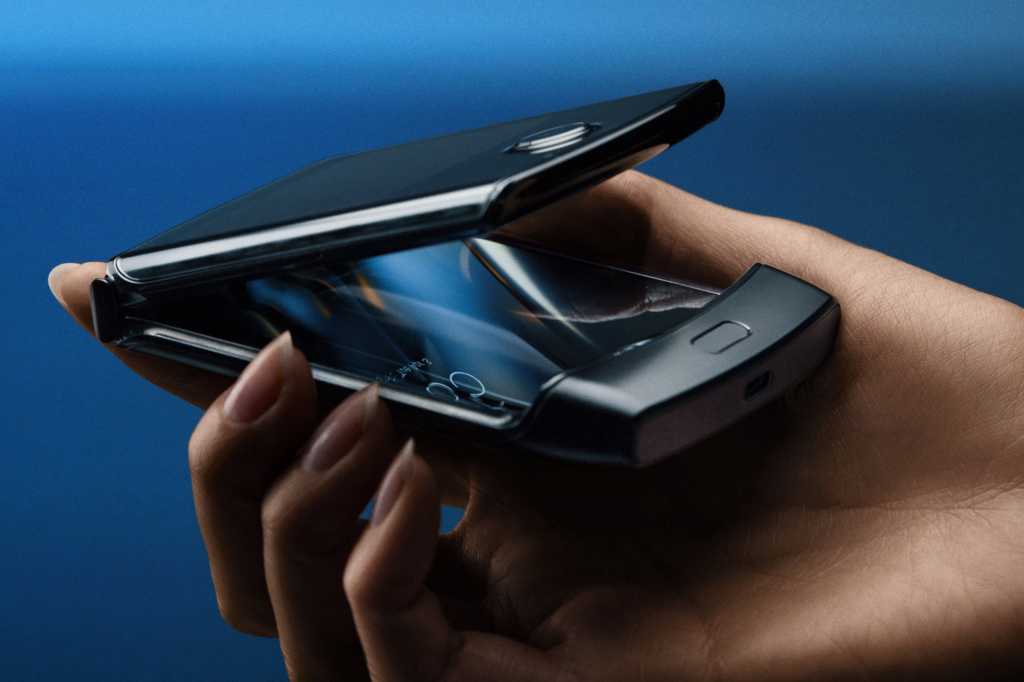 In a year that brought thousand-dollar creases, ”holeless” handsets, and waterfall displays, it’s only natural that the final phone of the year would be the craziest of all. Meet the new Motorola razr.

That’s right, the iconic RAZR V3—the phone everyone wanted before the iPhone changed the world—is back with an updated design, edgier (non) capitalization, and a whole new philosophy. The original ultra-thin design that gave the phone its name is nowhere to be seen—the new one measures a whopping 14mm when closed—but it still opens like the flip phones of old and retains its hefty chin. And because it’s 2019 and every phone needs a headline-grabbing gimmick, it has a folding screen.

Motorola could have gone with two screens akin to the LG G8X to still deliver a cool retro phone, but it clearly wanted to make a statement with the razr. And that means you’re going to be paying $1,500 for a slice of 2005 nostalgia.

But aside from its flexible screen, the Motorola razr is by no means a flagship phone:

The Snapdragon 710 isn’t a bad chip by any stretch, but it’s targeted at mid-range phones that cost $300 to $400, not thousand-dollar flagships. And the battery seems insanely small to power a 6.2-inch screen for a whole day, even if it is only 720p. And don’t get me started on a $1,500 Android phone that doesn’t run Android 10, especially one that isn’t going on sale until 2020.

It’s also a Verizon exclusive, with no plans to bring it to any other carrier, but doesn’t have 5G networking on board. I’m the last person to push for 5G in phones, but after Verizon has been pushing its next-gen network, it’s odd for a high-priced exclusive handset to launch without it.

All about that hinge

But even with low-end specs and an outrageous price tag, the Motorola razr is definitely an interesting handset. It’s small enough to comfortably fit in a pocket or a bag, and the hinge mechanism allows it to fully shut with a satisfying snap. Motorola says the hinge is designed in a way to prevent creasing, but only time will tell if that’s the case. But Motorola seems to have learned from Samsung’s mistakes with the Galaxy Fold and designed a thoughtful, functional hinge.

However, because this is new tech, no one’s really sure of just how reliable it will be, so Motorola is giving users a little peace of mind for their $1,500. In the U.S., Motorola will offer 24/7 chat support and 14hr/day agent direct access with device analytics, as well as 24-hour turnaround and free advanced exchange support with free next day delivery. That doesn’t exactly scream confidence, but at least Motorola will quickly make things right in the event of a display issue, which are almost certain to crop up.

But the biggest unknown about the razr is usability. The tiny screen on the outside allows for a number of functions, including selfies, Google Pay, Google Assistant, and of course, notifications, but the razr is mainly designed to be used when opened. With such a tall screen, however, apps, typing, and general functionality will all need a muscle-memory retraining, and even then, I’m not sure how smart it is.

Let’s remember, the original RAZR V3 had a control pad on the bottom half and didn’t have a touch screen, so all of your actions and interactions were confined to the area where your fingers could comfortably reach. When opened, the top of the razr is 172mm away, further than the Galaxy Note 10+ (162mm) and iPhone 11 Pro Max (158mm), basically guaranteeing that one-handed use is all but impossible. Unless Motorola has designed a One UI-style interface that pushes content lower on the screen, you’re going to be constantly shifting your grip to reach items on the display.

But I suppose those are problems that anyone willing to plunk down $1,500 on the razr will be happy to solve. And they’ll have an opportunity to do just that when preorders open on Dec. 29 for shipping Jan. 9.