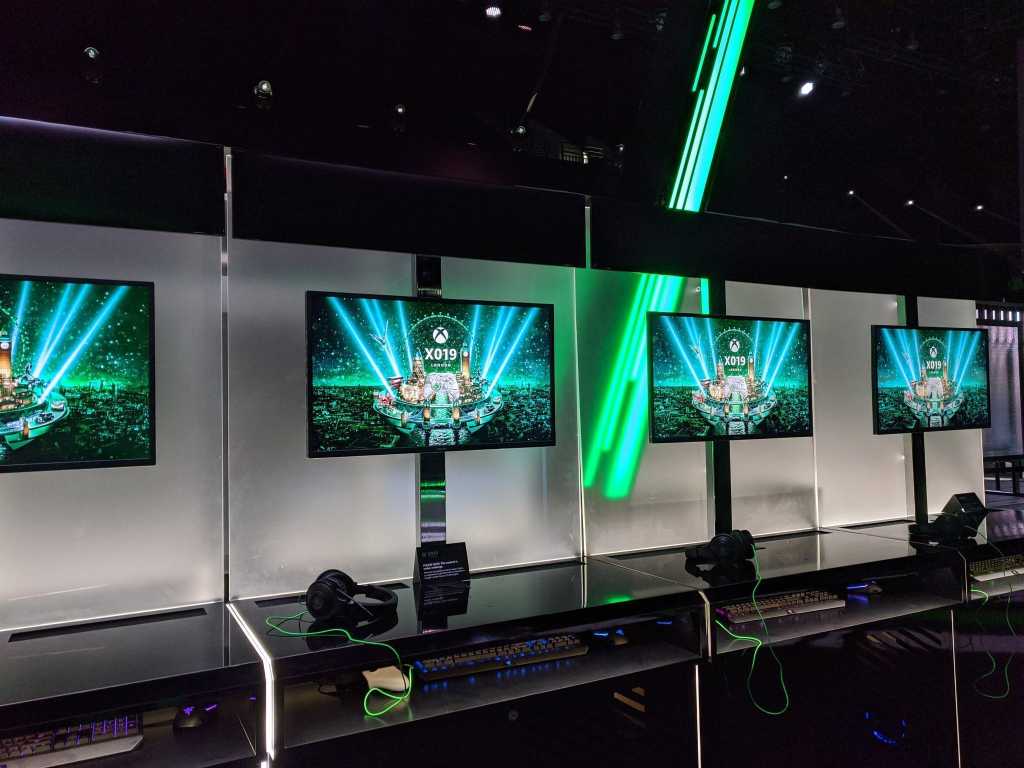 Last year Microsoft resurrected its X0 fan gathering in triumphant fashion, announcing that it had acquired veteran developers InXile and Obsidian. This year, at Xbox X019, we saw the first payoff as Obsidian announced a new game and InXile pinned a release date on Wasteland 3.

That news, plus the first proper trailer for Age of Empires IV, details on Project xCloud’s forthcoming PC launch, a release date for Halo on PC, a new game from Rare, and more as we recap all the announcements at Xbox X019. Microsoft’s event has become very relevant for PC gamers.

A survival game, eh? I didn’t expect that to be Obsidian’s first project under Microsoft’s tutelage. Actually, I assumed the Obsidian purchase wouldn’t bear fruit for another few years, and would culminate in an Outer Worlds-style RPG.

But no, early in 2020 we’ll get Grounded. It’s going to be the next “Xbox Game Preview” title at release, a.k.a. in Early Access, and is headed up by Pillars of Eternity’s Josh Sawyer which is always exciting news. Obsidian’s stated goal is to create a story-driven survival game, which isn’t exactly uncharted territory—The Long Dark just added its third chapter last month, and Subnautica had light story elements as well.

Still, Grounded has a pretty damn unique hook. It’s basically Honey I Shrunk the Kids, but playable. You’re tasked with surviving in a normal, everyday suburban backyard—except you’re the size of a bug. Don’t get stepped on. Or do? No kink-shaming here.

Let’s pivot straight from one acquisition to the next. It’s been more than three years since Wasteland 3’s crowdfunding campaign, but it’s aaaaalmost ready. InXile’s Brian Fargo brought a new trailer to X019, and also an official release date: May 19, 2020. That’s nearly six months to the day from now, which is just about enough time to finish our 2014 Game of the Year Wasteland 2 if you haven’t already.

Another long-awaited release date, 343 originally said the entire Halo: Master Chief Collection would be out on PC by the end of 2019. That uh…well, that’s probably not happening. We will get the first part before the year is out though! Testing is finally wrapping up, and we’ll see Halo: Reach hit both Steam and the Windows 10 Store on December 3. Hopefully the rest isn’t far behind.

The Sea of Thieves launch didn’t go as swimmingly as I’d hoped, but the game’s seemingly in a pretty good place these days and I still get plenty excited when I hear Rare’s working on something new. We saw little more than a teaser at X019, but it’s called Everwild, it looks very vaguely Zelda-ish, and you can catch the debut trailer below:

I’m actually surprised how many games Microsoft’s putting out before next year’s console generation handover. In addition to Wasteland 3, Ninja Theory’s Bleeding Edge is officially confirmed for release on March 24, 2020. I’m still not sure this Battleborn-looking multiplayer game is anything I want, but hey, it’s Ninja Theory doing competitive melee combat. That’s intriguing at least.

Microsoft hasn’t acquired Life is Strange developer Dontnod. Not yet, anyway. But they have partnered with Dontnod for a brand new game in the same vein. Titled Tell Me Why, it’s due to release in three episodes over the course of Summer, 2020—a much tighter timeline than Life is Strange 2, which will wrap up in December more than a year after its first episode released. Hopefully the more predictable schedule gives Tell Me Why a bit more staying power, as I feel like Life is Strange 2 came-and-went before it was even properly finished.

I’m not much of a flight sim fan, but I’ll admit the new Microsoft Flight Simulator has piqued my interest. Google Earth VR is one of my favorite virtual reality experiences and the new Flight Simulator looks like a mildly more interactive version of the same. It uses Bing Maps to simulate the entirety of Earth which is pretty damn cool from a technological perspective, and makes me want to do flybys of my parents’ house or whatever. Places you’d never see rendered with this fidelity in a normal game.

Anyway, there’s a new trailer. Is…is a flight sim one of my most anticipated games for 2020? It damn well might be.

Wrapping up the trailers, we got our first proper in-game look at Age of Empires IV. And there’s been a change—or maybe not? I’m not sure. Last I heard Age of Empires IV was supposed to be a Relic-developed game though, and now it’s being helmed by (according to the press release) “the newly named studio World’s Edge.”

It looks like Age of Empires with a decade’s worth of technological improvements. World’s Edge confirmed it’s set in the medieval era, same as fan favorite Age of Empires II, and showed off the Mongols and English. The armies in this trailer look absolutely massive as well, which makes me wonder how you’ll handle them in a real-time environment. Are they grouped together like Total War? Hopefully we’ll find out soon.

Google’s game-streaming service Stadia launches next week, so it’s probably a good time for Microsoft to announce it’s expanding its competing Project xCloud platform to PC in 2020. Early xCloud tests are already underway on phones, but I’m excited for a trial that’s more pertinent to my own interests. There’s also mention in the press release of “collaborating with a broad set of partners to make game streaming available on other devices as well,” so cue the Nintendo Switch rumors again.

As for what you’re playing, Microsoft’s sweetening the pot with 50-plus new games, including Devil May Cry 5, Shadow of the Tomb Raider, Forza Horizon 4, and Madden 20. Considering Stadia is due to launch next week with 12 games total…well, Microsoft’s making a solid argument even before xCloud’s officially released.

And Xbox Game Pass for PC is looking ever-more-compelling as well. There are a handful of new games today, including Age of Empires II Definitive Edition, Hearts of Iron IV, and The Talos Principle. The next few months look packed though, with highlights as varied as Age of Wonders: Planetfall, most of the Final Fantasys, Forager, My Friend Pedro, and SkateBIRD. The Xbox version gets The Witcher 3 and not the PC, which is a bit frustrating, but there’s still plenty to justify the subscription I think.

Overall, a pretty impressive Xbox X019 for Microsoft. Can they top it with X020? I certainly hope so, given that new consoles are due to launch around that time. The bar’s set pretty damn high though.