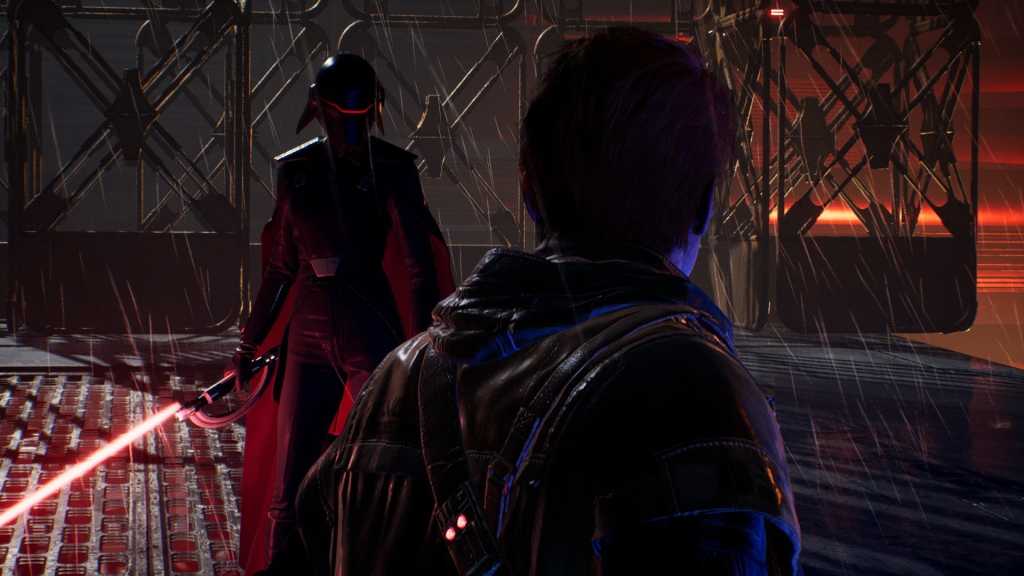 It’s always so mundane before I arrive. That’s my favorite part of Jedi: Fallen Order, the calm before the storm-that-is-me. Two Stormtroopers, sunlight glinting off their pristine white armor, silhouetted against the infinite greenery of Kashyyk, stand making small talk. Sometimes it’s about the local fauna. Other times, it’s the ongoing war. Most often, it’s about me.

Then like the devil himself I appear, a whirlwind of light from the shadows. The chatter gives way to alarm, frantic orders and shouts of “He’s here!” I am unstoppable, deflecting blaster bolts and cutting down one, two, three Stormtroopers, then flinging reinforcements off a nearby cliff.

And then the lightsaber retracts, and all is quiet again.

A long time ago

Respawn finally did it. It took six years, two failed Battlefront games, and multiple high-profile cancellations, but Jedi: Fallen Order made good on EA’s Star Wars deal. This is the Star Wars game I was looking for.

Nobody is more surprised by that fact than me. The Jedi: Fallen Order demo I saw at E3 this past June was far from inspiring, looking like little more than a Force Unleashed clone a decade later. Would that have been terrible? No, especially given EA’s track record. I wasn’t excited though.

If only they’d told me it had the structure of 2013’s Tomb Raider reboot. And listen, usually it’s gauche to describe a game in terms of others. I try to avoid it when I can. Jedi: Fallen Order really is the sum of a half-dozen parts though—the action of an Uncharted, the gated level design of Tomb Raider, the winding paths and combat of a Dark Souls or Sekiro.

Fallen Order doesn’t disguise its influences and who cares? It does a hell of a job combining these disparate parts.

For me, the hook ended up being the exploration though. There are four main planets in Jedi: Fallen Order: Bogano, Kashyyk, Dathomir, and Zeffo. And while the story is a lot more linear than it lets on, the planets are anything but. They’re dotted with secrets—hidden collectibles, shortcuts, bits of lore. Rewards for those who seek them out, including new outfits for main character Cal Kestis and paint schemes for sidekick droid BD-1.

Back in 2013 I tracked down 100 percent of the secrets in Tomb Raider. I’m well on my way with Jedi: Fallen Order. There’s something addictive about “solving” an environment, looking at the map just like in the Metroid days and noticing a door you haven’t been through yet, a path unexplored.

Not that there aren’t missteps. Fallen Order abstains from any fast travel system, a novelty in this day and age—and one I appreciated, until I started reaching the end of the game. There just aren’t enough shortcuts on certain planets to make up for 10 to 15 minutes spent crossing places you’ve already been. The pacing starts to grind to a halt even if you’re only in it for the story, with Dathomir requiring you run the same introductory section back-and-forth at least three times before the end with few substantial changes.

Jedi: Fallen Order is also weirdly obsessed with those slide sections you occasionally see in Tomb Raider and Uncharted. You know, the ones where a platform gives way and suddenly you’re surfing down the side of a mountain or whatever. They’re everywhere in Fallen Order, and play like the infamous “Cool, Cool Mountain” slide in Mario 64, leaning around turns and such. It feels cartoonish and silly even in the context of the usual Uncharted-style traversal.

But those aspects aside, I really loved discovering each new planet. It proved immensely satisfying, slowly uncovering parts of the map, walking through an environment for half an hour only to spit back out the other side and think “Oh neat, this was that locked door I saw earlier!” I had a similar reaction to Darksiders III last year, but Fallen Order is a smoother version of those ideas with better reasons to go deviate from the main path.

Combat I’m less enamored with, though I think Jedi: Fallen Order is on the right track. It’s very similar to Sekiro in that parrying is the best way to throw your opponent off-balance, following up with a flurry of attacks when their guard is broken. Fallen Order doesn’t feel as clean or precise as a From Software game though. It’s an unfair comparison perhaps, but one Respawn’s invited by designing its fights this way.

Some of the later boss duels capture that steel-against-steel (or laser-against-laser) feeling, and combat opens up as you unlock more Force powers. I really enjoyed using Force Pull in the late-game to hold an enemy helpless in the air, then slice through them. Cutting through Stormtroopers is always thrilling as well, making lightsabers seem proper deadly. But it never quite reaches the heights of a proper Souls-like, and for much of the game combat feels like an afterthought compared to simply exploring the environment.

Would I like to see Respawn try again? Absolutely. This is the best lightsaber combat has felt since Force Unleashed, or maybe ever. Tighten it up, add more enemies and more large-scale battles, and Fallen Order 2 could be brilliant.

Oh, and I should say: I loved designing my lightsaber. Many of the collectibles in Jedi: Fallen Order are hilts, emitters, and metal alloys so you can make your weapon your own. I consider that a key part of the Jedi fantasy, and Fallen Order nailed it.

In a galaxy far, far away

I also never expected to fall in love with a droid, but here we are.

Fallen Order’s story is probably the aspect I care least about, in part because I’m not much of a Star Wars fan these days, and in part because uh…well, you pretty much know what the stakes are from the start. Disney wiped the extended Star Wars canon when it took over the series from George Lucas, but it’s filling right back up again. An entire galaxy, thousands of years of potential lore to mine, and we cannot stop retreading the 40-odd years covered by the films.

Which is to say, Jedi: Fallen Order takes place between Revenge of the Sith and A New Hope, in the period following the Jedi Purge. Ever the incompetent bunch, apparently the Clone Troopers overlooked a young Jedi-in-training during the Purge, a certain Cal Kestis, who went into hiding as a scrapper on the planet Bracca. Fast forward five or six years, Kestis is forced to flee, falls in with a crew looking to resurrect the Jedi order, and embarks on a galactic scavenger hunt to do just that.

A scavenger hunt with zero stakes, because we already know how the next five (and soon six!) movies play out. [Note: Main-line movies. Don’t talk to me about Rogue One.]

It’s safe territory. Familiar territory. And Respawn’s not done Fallen Order any favors by making Kestis easily the least interesting character in his own game. I don’t just mean in a “He’s generic” way, though he certainly is that. No, worse is that Kestis’s voice performance is wooden even at the best of times. He talks about war and the loss of the Jedi like he’s reading ingredients from a cereal box.

Jedi: Fallen Order overcomes its stilted protagonist and some poorly explained story beats though. It made me care about a Star Wars thing for the first time in a long while, mainly on the strength of its supporting cast. Cere (played by Debra Wilson) is a high point as Kestis’s somewhat reluctant mentor. Greez and Prauf, Kestis’s surrogate fathers, are excellent as well. Fallen Order demonstrates what we should all know by now, which is that it doesn’t matter whether you tell a familiar story as long as the characters are interesting enough to give it some flavor.

And then there’s BD-1. I successfully avoided the BB-8 fervor, Disney’s last attempt to make a “cute” (and more importantly, merchandise-friendly) droid. Eighteen hours with Jedi: Fallen Order made me want my own BD-1 though. He rides on your back! You can give him a rad synthwave pink-and-black paint job! He hacks enemy droids for you!

Given Fallen Order is canon, I’d love to see Greez or Cere show up in Star Wars proper. But BD-1? I demand he play a part.

Kidding aside, Star Wars is at its best when exploring themes like found family, faith in your friends, and other such universals. Fallen Order looks like the films, even plays like you’d imagine, but its real triumph is in demonstrating as deep an understanding of what makes Star Wars beloved as any of the modern-day films. It’s not the best Star Wars story, nor the most original—and please, please let’s get away from this jam-packed time period and explore the Old Republic or something again—but it does feel like it belongs.

Jedi: Fallen Order is a type of game that doesn’t get made very often nowadays, especially by EA. I hope that changes, because it’s refreshing. Character-driven, concise, with solid action sequences and a focus on how levels flow. Everything I want, and a lot of it at odds with the current era of open-world sprawl and evolving live-service games.

Does that make me biased? I guess—but only insofar as I like a game with a proper story to tell. As I said, I don’t even like Star Wars that much, and yet I drank up Jedi: Fallen Order like it was the last drops of water on Tatooine. I’d take a dozen more, and I hope Fallen Order proves enough of a success to make it worth EA’s while.

Hell, maybe one day BioWare will get to make Knights of the Old Republic III. Wouldn’t that be something?