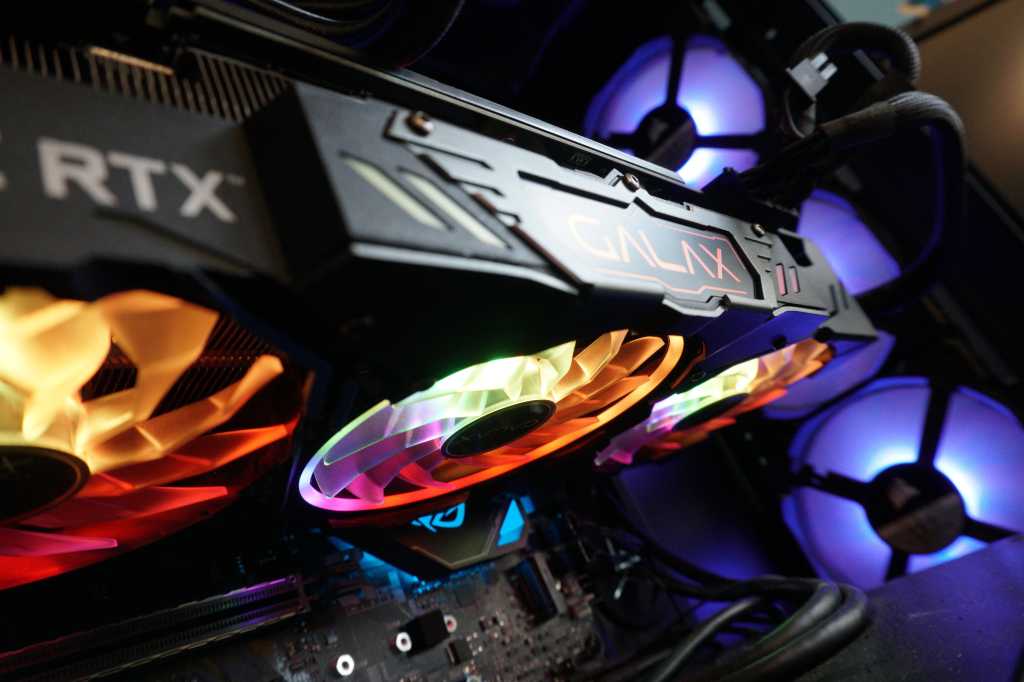 Seriously: This is the first graphics card I’ve ever tested that inspired me to run and grab my non-techie wife, drag her into my office, point, and exclaim, “Just look at this.”

The Galax GeForce RTX 2070 Super WTF blends old and new in delicious fashion. Its massive heat sink, trio of translucent RGB-backlit fans, and cutting-edge ray tracing capabilities belong firmly in the modern era. But its exotic aesthetic—a vivid galaxy adorns its backplate, studded with invisible stars that gently illuminate when you power up the card—harks back to a bygone era when graphics cards leaned on airbrushed images of wizards and fighter planes to stand out from the crowd. This look is augmented by a heavy dose of RGB lights spread across four individually controllable zones.

Okay, the name is dumb. But I love it anyway. Which makes it a terrible shame that you can’t buy it Stateside.

That lack of United States availability prevents us from formally reviewing the Galax GeForce RTX 2070 Super WTF, as overseas pricing varies greatly and doesn’t translate well to North America. This high-end card currently sells for the equivalent of $650 before tax in other regions, Galax representatives tell me, which is well above the $500 to $550 that most RTX 2070 Super cards sell for in the U.S., though the card also comes with a gaming headset and t-shirt.

Still, this card is so unique it deserves to be shown off.

Let’s start with the technical details. Galax’s model sticks to the same core specifications as the standard 8GB GeForce RTX 2070 Super, but comes factory-overclocked at 1,830MHz. That’s a modest 50MHz increase over the 1,770MHz reference boost speed, and no surprise, the WTF effectively drew even with Nvidia’s Founders Edition across our suite of tested games. It was two or three frames faster per second in most games, but that’s nothing you’d ever notice while you play.

That’s expected, however, as almost all high-end graphics cards deliver near-identical performance to rival models with the same GPU. Most GeForce RTX 2070 Supers perform at the same level, most Radeon RX 5700 XTs perform at the same level, most GeForce RTX 2080 Ti behemoths hit the same basic frame rates, and so on. These days, custom models justify their price premium with fancy extras and designs that improve quality of life rather than simply deliver performance boosts.

The GeForce RTX 2070 Super Work The Frames does so, I’m happy to report. Galax built the card atop a fully custom PCB with high-quality components and a 7+2 power phase delivery system. If you want to try to push speeds even further with manual or automatic overclocking, the WTF is built to accommodate your wildest adventures. That’s aided and abetted by the card’s extensive cooling system. This is a long, thick card—measuring 12.9 x 5.9 x 2 inches—with a long, thick heat sink riddled with supplementary heat pipes. The aggressively designed plastic shroud includes a trio of 90mm “Wings” fans with an anti-dust bearing design and anti-static coating.

Each fan sports 11 translucent blades that curve 1/3 and 2/3 of the way up the shaft. Better yet, Galax’s Wings fans support idle fan stop, so they won’t kick into gear until you’ve loaded up the GPU. In practice, that means it’s silent during desktop use, which is awesome. Idle fan stop is becoming more common in high-end graphics cards, and I’m all about it.

Galax says the WTF design “provides high air flow and air pressure at minimal noise level,” and that proved true in our testing. The Galax GeForce RTX 2070 Super Work The Frames runs very quiet while still maintaining maximum temperatures a whopping 11 degrees (Celsius) cooler than Nvidia’s RTX 2070 Founders Edition. It topped out at a frigid 65 degrees Celsius, compared to the FE’s 76. This is about as cool as high-end graphics cards get.

Those translucent fans tie into the WTF’s wonderful aesthetic design. Galax loaded up the card with RGB lighting, which you can customize using 23 different effects across four different zones with the company’s Aurora Sync software. The side and top of the card light up, too. This is Peak RGB, and it’s surprisingly glorious.

That top of the card is the truly original part. The WTF includes a full-length metal backplate to help with cooling and stability, and Galax decorated it with a beautiful image of a galaxy, white streaks swirling through gorgeous pink and purple and blue hues. It evokes the fantastic art that used to adorn graphics cards of the Voodoo 3dfx and ATI era, but in a tasteful way.

The real magic occurs when you plug in the card—it takes six-pin and eight-pin power connectors—and boot up your system. When you do, previously invisible elements start softly glowing, with the Galax logo and several larger stars twinkling to life. It was an unexpected and joyous surprise, filling me with childlike delight in a way a graphics card hadn’t in a long time. Sure, high frame rates are cool (and the Galax GeForce RTX 2070 Super Work The Frames deliver those in spades), but using RGB LEDs to hide visual elements in a psychedelic design isn’t something I’ve ever seen before.

All in all, it’s a bummer that this card isn’t available in the U.S. Galax engineered the RTX 2070 Super WTF to run fast, but also cool and quiet, and loaded it up with ports galore (three DisplayPort and one HDMI). It’s missing a few of the extra features found on some rival graphics cards, like dual-BIOS options or supplemental fan headers, but on the flip side, the Galax GeForce RTX 2070 Super Work The Frames includes abundant RGB customization options and a luscious aesthetic that helps it stand out (far out, man) from the monochrome crowd of “gamer”-styled graphics cards so common today. We can’t slap a formal review rating on this card, but as a lover of the weird and beautiful and beastly, I’m a fan.