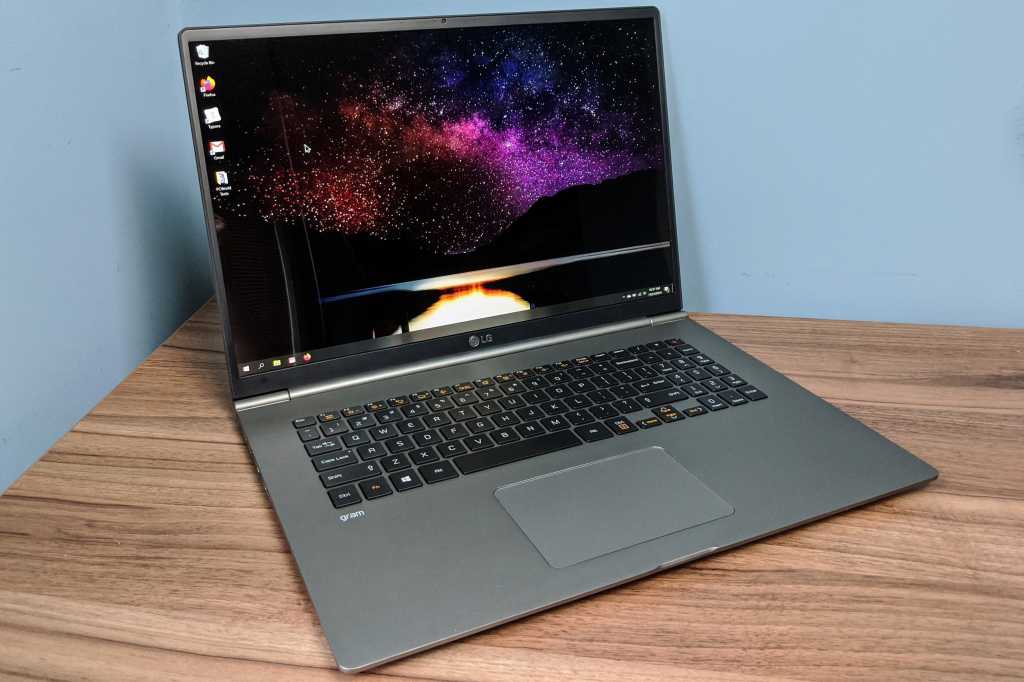 With a huge screen and lightweight design, the LG Gram 17 is a joy to use.

While reviewing the LG Gram 17, one thought persisted: Why aren’t people freaking out over this laptop?

Here we have a notebook with a gorgeous 17-inch display and monster battery life, yet at 2.95 pounds, it’s almost as light as a 13-inch MacBook Air. Factor in a cool and quiet chassis, a silky-smooth trackpad, ample storage, and plenty of ports, and you have a big-screen laptop with none of the usual big-screen trade-offs—well, aside from its steep $1,699 list price (though we’ve noticed a lower price on Amazon).

To be sure, the LG Gram 17 isn’t perfect, because no laptop is. It doesn’t have the best keyboard, its design feels a bit bland, and speaker quality is downright terrible. But when you’re working in luxurious comfort on an almost desktop-sized display and getting well over a full day’s battery life to boot, the LG Gram 17’s handful of issues have a way of receding into the background.

As the name suggests, the LG Gram 17 has a 17-inch, 2560-by-1600 resolution display, and it comes in one configuration, with an 8th-generation Intel Core i7-8565U processor, 16GB of DDR-2400 RAM, and a 512GB solid state drive. A fingerprint reader is built into the power button on the top-right corner of the keyboard, but there’s no face recognition to go with the 720p webcam. Keep in mind also that this is a traditional clamshell laptop, with no touchscreen.

On the laptop’s left side, you’ll find Thunderbolt 3, a USB 3.0 Type A, HDMI, and a DC input for the Gram’s proprietary charging brick. (The laptop can also take a charge through the USB-C port.) The right side includes two more USB 3.0 Type A ports, a headphone jack, and—in what increasingly seems like a rarity on consumer laptops these days—a MicroSD card slot. One might nitpick the lack of USB-C on both edges, but this is a solid arrangement of ports overall.

The vast majority of 17-inch laptops aspire to be desktop PC replacements, with spinning hard drives, discrete graphics cards, and sometimes even old-school optical disc drives. By contrast, the LG Gram 17 aims to hang with smaller thin-and-lights, making it one of the most unique laptops available today.

Just looking at it, you’d expect something much heavier, so when you pick it up, its lack of density is wow-inducing. (I know this, having foisted the laptop upon various friends and family members during my time reviewing it.) The laptop is fairly slim as well, measuring 0.7 inches at its thickest point.

The display itself is no slouch either. I’m a fan of the 16:10 aspect ratio for laptops in general, and on a 17-inch screen that amounts to a half-inch of extra vertical screen space compared to typical 17.3-inch laptops with 16:9 aspect ratios. Meanwhile, the 2560-by-1600 resolution display makes everything look sharp, and we measured a peak brightness of 362 nits, which is on the high end for any laptop.

This ultralight design does have some inherent downsides. The carbon and magnesium chassis might be sturdier than plastic, but it feels cheap to the touch—especially pressing on the center of the lid, which has a lot of flex. The medium-gray color scheme is just drab. I have photographic evidence of LG showing off a snazzier-looking white version of the Gram 17 during CES in January, but for whatever reason LG has opted not to release it in the United States. That’s too bad.

While LG claims it has fit a 17-inch laptop inside a 15-inch laptop frame, that’s a bit of a stretch. At 15 inches wide and 10.5 inches long, the Gram’s footprint is about an inch larger than a 15-inch MacBook Pro in each dimension, and it’s even slightly taller and wider than a 15-inch Dell Inspiron econobox. If you’re not already using a large laptop, you might need to upgrade your travel bag to accommodate the LG Gram 17.

The LG Gram 17’s biggest weak point is its keyboard. It’s not outright bad—it offers plenty of travel, and there are no failure-prone butterfly key switches here—but the keys are on the rigid side, and they squish a bit when you press down against the laptop’s frame. LG’s insistence on including a number pad—but not stretching the keyboard closer to the edges of the frame—is also a mistake, resulting in overly small space bar and backspace keys.

The trackpad, however, is a delight, at least for those of us who are accustomed to touch-tapping. It’s a smooth and spacious surface that doesn’t stick under prolonged use, and Microsoft’s Precision Touchpad drivers do a great job with palm rejection as you type. Those who prefer to click down on the trackpad will have more to complain about, as the LG Gram 17’s clicking mechanism is pretty stiff.

Windows laptops seldom shine on speaker quality, but the LG Gram 17 stands out for being worse than most. Bass lines are almost indiscernible while listening to music, and audio overall sounds strangely muffled, as if you’re talking to someone over the phone. Even just listening to people talk on YouTube, sound quality was more on a par with a smartphone than decent laptop or tablet speakers.

Along a somewaat similar line, I expect most Windows laptops (except Microsoft Signature Edition ones) to include some level of bloatware, but LG’s software suite has one unusual quirk: Its Support Center software shows information only in Korean in the system tray. The laptop also includes a “Reader Mode” feature that gives the screen a reddish tint, which is fine, but it has a bad habit of nagging you to use it via notifications, and Microsoft’s built-in Night Light does a better job. Fortunately, LG’s bloatware can be removed without incident.

Let’s start with the best news first: LG put a massive 72Wh battery in the LG Gram 17, and the result is stellar runtime. It is incredibly relieving, at the start of a work day with no charger on hand, to see Windows estimating over 9 hours of battery life. While those estimates do fluctuate based on workload, I had no issues getting through an entire workday with this laptop.

That anecdotal experience is backed up by our battery rundown test, in which the LG Gram 17 clocked 12 hours and 45 minutes of looping video at 255 nits’ brightness. The only laptop that came close in our tests is LG’s own Gram 14 2-in-1.

LG also deserves credit for the thermal design of this laptop. Under heavy loads—for instance, while encoding a large video file—the Gram 17 gets warmest around the center-rear of its underside. Even here, it’s not overly hot, but the Gram’s large footprint means you can comfortably rest the laptop with your legs on either side of the warm spot, even during demanding tasks. The laptop also stays pretty quiet throughout these heavy operations, and under normal loads you probably won’t hear anything at all.

All of which is a preface for saying the LG Gram 17’s general performance benchmarks are a mixed bag, when compared to competitors similar in profile or configuration. Keep in mind that the Gram’s Intel Core i7-8565U processor is technically a generation old at this point, so we’d expect it to lag behind laptops with 10th-generation CPUs, such as Dell’s latest XPS 13 2-in-1. Same goes compared to Microsoft’s spiffy new AMD Ryzen-powered Surface Laptop 3.

PCMark, which simulates a gamut of productivity tasks, was actually the exception to the rule here, as the LG Gram 17 edged out several other laptops including that new XPS 13. However, all the laptops here scored well over 2,000, which is very good.

The results in Cinebench, which tests performance under quick bursts of heavy demand, were less successful. The LG Gram fell behind other laptops—and the new XPS 13 especially—in multi-threaded performance, though single-thread performance was pretty solid.

As for the aforementioned task of video encoding in HandBrake, the LG Gram 17 took much longer than other thin-and-light laptops, even ones with 8th-generation Intel processors. Given the laptop’s slim design and its impressively cool operation, it’s likely that LG is more willing to throttle performance in service of keeping things comfortable.

Finally, at the risk of stating the obvious, the LG Gram 17 is not a gaming laptop. Graphics performance in 3DMark’s Sky Diver benchmark lags well behind laptops with discrete graphics cards such Dell’s Inspiron 15 7000 Black Edition, and it was predictably beaten by the new XPS 13, whose 10th-gen Intel Core i7-10710 CPU brings improvements to integrated graphics performance.

Should you get the LG Gram 17?

Although LG offers lots of laptops in which portability is the primary selling point, the LG Gram 17 is the ultimate manifestation. There’s nothing else like it on the market, and it’s mostly a joy to use despite a middling keyboard and awful speakers. We expect prices on laptops with 8th-generation Intel Core CPUs to drop as laptops powered by 10th-generation chips hit the market, so now might be the perfect time to snag this unique thin-and-light.