Comparing Intel’s Core i7 mobile chip to AMD’s Ryzen 7 mobile chip usually comes with the qualifier that every laptop implementation is different. Not this time. PCWorld had the chance to test the Microsoft Surface Laptop 3 in both its Ryzen 7 and Core i7 versions, essentially identical laptops save for the CPU. This gives us the exceedingly rare opportunity to crown the best laptop processor of this generation, based on head-to head tests.

Granted, it’s not an 100-percent direct comparison. You’ll see differences in the size and manufacturer of the SSD used, for example, which has an impact on performance. Each platform has a slightly different type of Wi-Fi, which is something we didn’t test directly. And, of course, Microsoft is using the Ryzen 7 Surface Edition, a semi-custom version of AMD’s mobile Ryzen chip.

Otherwise, though, it’s pretty close: Aside from Intel’s Comet Lake, this is Intel’s 10th-gen chips up against AMD’s (current) best and brightest. Read on for our head-to-head comparison of Core i7 vs. Ryzen 7, courtesy of the Surface Laptop 3. For deeper insight on the laptops themselves, here are links to their full reviews:

Note that the Surface Laptop 3 ships in both 13.5-inch and 15-inch configurations. Below, we’ve simply called out the specific models we tested. 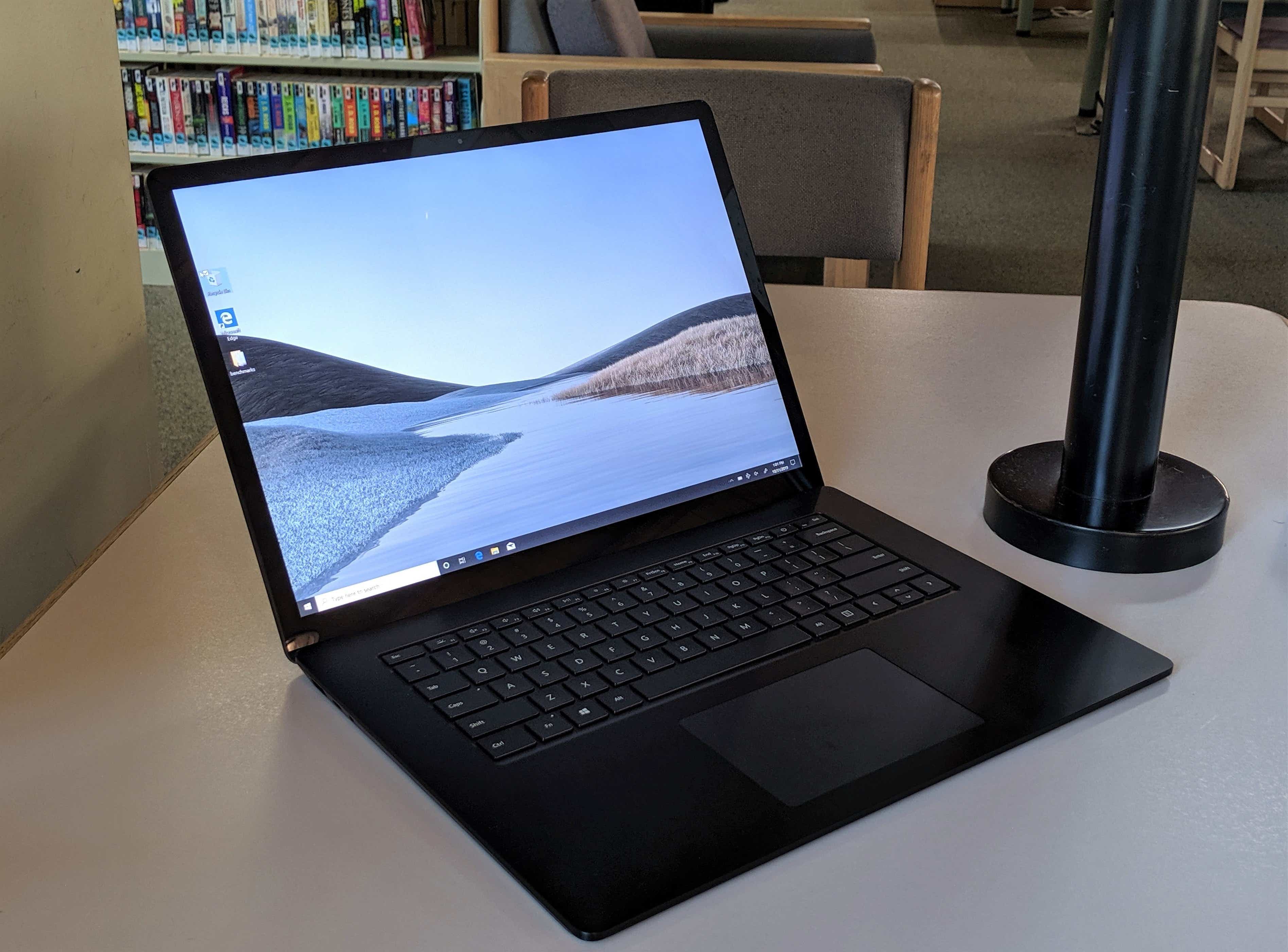 What exactly is a Microsoft Ryzen Surface Edition? We’ve dedicated an entire article to explain the Surface Edition chip, but here’s the short answer: It’s a semi-custom quad-core chip with eight threads, but based on the older AMD Zen+ architecture and 12nm process. This is significant, because it’s AMD’s 7nm, Zen 2 chips that are dominating on the desktop. They’ll arrive in the mobile space in 2020.

Intel’s Ice Lake, meanwhile, is the code name for one of the new 10th-gen, 10nm Core families that Intel introduced earlier this year. (The other, Comet Lake, trades off its older “Whiskey Lake” architecture for faster clock speeds.) Intel’s said quite a bit about the Ice Lake architecture as well as its new AI capabilities. It’s also made the bold claim that its Ice Lake graphics are as good as AMD’s own. One of AMD’s historical claims to fame is the strength of its integrated GPUs. We can put that to the test today.

Ryzen 7 versus Core i7: The battle begins

We tested head to head, with one adjustment. Microsoft configured both laptops at minimal performance levels / maximum battery even when plugged in. That’s the default configuration, and many people won’t even touch it. Still, we wanted to know what would happen if users dialed up performance to the maximum, so we tested the latter option, too.

We’ve graphed each chip’s performance—Intel in blue, and AMD in red—with the “max perf” levels outlined in black. For each, we’ll declare a winner based on the percentage difference, but only for the default, base settings.

Our first test used PCMark 8 and its more modern counterpart, PCMark 10, to synthesize performance in the real world using a mixture of application benchmarks. PCMark 8’s Work test measures spreadsheet performance, word processing, and web browsing—all tasks we’d expect each processor to handle with aplomb. Below, we compare how each processor performs.

The same goes with the Creative version of the PCMark 8 benchmark, which expands the testing to include photo editing, video editing, light gaming, and video chat. As one indication of real-world performance, the Ryzen 7 Surface Laptop 3 completed the video-editing portion of the test in 148 seconds, while the Ice Lake system needed only 120 seconds to complete it.

PCMark 10, however, mashes these two up with a more modern take on the above tests. We use the main PCMark 10 benchmark, which focuses on everything from app startup to videoconferencing, web browsing, photo and video editing, and rendering. We save the gaming tests for 3DMark, the results of which are shown later in this story.

One flaw of PCMark, though, is that the benchmark measures the system as a whole. The speed at which an application starts up is going to depend partially on the SSD, which we assumed to be roughly identical across the two PCs.

We were surprised to see that the SSDs were actually different. SSD speed shouldn’t have too much bearing on CPU-specific benchmarks, but it’s worth noting anyway.

Cinebench is the gold standard for CPU evaluation. While it generates a synthetic score, the Maxon software it’s based upon, Cinema 4D, is a real-world application.

The benchmark renders a scene in real time, using one or all of the CPU’s cores. We generally focus exclusively on the all-cores approach, though we test single-core performance, too. In the single-core version of this tests, Ice Lake yielded an average score of 182, compared with 152 for the Ryzen 7. Ice Lake’s edge is still there in either case.

The free HandBrake utility transcodes a full-length movie file (32GB, in 1080p MKV format) into a format that’s better suited for an Android tablet. We consider this to be a prolonged torture test on how long a CPU can sustain its turbo speeds, assisted by the laptop’s ability to cool the chips. While it’s certainly possible that Microsoft architected different cooling mechanisms for each chip, we can assume that they’re close.

Once again, the HandBrake benchmark favors Intel’s Ice Lake chips, with a difference that translates into a two-minute gap in the real world.

We use 3DMark’s Sky Diver benchmark to help simulate 3D gaming. Intel’s Core i7 Ice Lake chip again comes out on top, by a very significant amount. It seems that Intel’s claim of superior integrated graphics are true, at least for now.

I also took the time to play a common mainstream game on both laptops: 2017’s Wolfenstein II: The New Colossus, with graphics presets set to Low. While these results are based on only one game, the performance of the Ryzen 7-powered Surface Laptop 3 neared 60 frames per second at 720p resolution, and about 30 to 34 fps at 1080p resolution.

Battery life, however, is where the two platforms dramatically differ. We charge the laptop’s battery to full, set the brightness of the display to a comfortable 250 nits, and plug in earbuds set to 50-percent volume. Then we unplug the laptop and loop a 4K video over and over until the battery expires. Because the battery is the same in both Surface Laptop 3s (though there’s a bit of variation in manufacturing), the variations in component choices should make all the difference.

And what a difference it is: an average of 10 hours, 26 minutes for Ice Lake, and 7 hours, 25 minutes for the Ryzen platform. That’s a three-hour delta between the Ice Lake and Ryzen platforms, a compelling advantage for Intel’s chip.

Interestingly, the Ryzen 7 Surface Laptop 3 generated quite a lot of variability in the results: 372 minutes (6 hours, 12 minutes) at the minimum, and 499 minutes maximum (8 hours, 19 minutes). So we ran extra passes of the test—eight in all—to hit the 445-minute average. We ran the usual three passes on the Ice Lake platform, but our minimum score was 585 minutes, or 9 hours, 45 minutes. In any case, it’s an enormous win for Intel’s Ice Lake.

The final metric that we can’t ignore is price. Microsoft has officially priced the Surface Laptop 3 for Business (Core i7) at a $100 premium. If you apply current additional discounts, however, and if you buy the same 16GB RAM/512GB SSD configuration as the $2,099 Ryzen 7 unit we tested…right now you’ll pay $200 less for the Core i7 version, or $1,999.

The best laptop processor is…

In some ways, this laptop CPU fight mirrored the recent Deontay Wilder vs. Luis Ortiz II title fight, in that Ortiz won every round. In real life, however, Wilder knocked out Ortiz with a massive blow, while Intel’s Ice Lake Core i7 won every benchmark contest, and knocked out the Ryzen 7 Surface Edition in battery life and price.

But wait: Remember how we noted that the Ryzen 7 is based on the older Zen+ architecture, and the older 12nm architecture? Deep in the bowels of AMD’s chip labs, the mobile Ryzen’s training—working out, getting fit, running through deep snow while carrying logs—getting in fighting shape to move into the 7nm weight class. (Just go with the metaphor.) AMD’s been pounding Intel hard with its 7nm desktop chips; will it do the same in mobile?