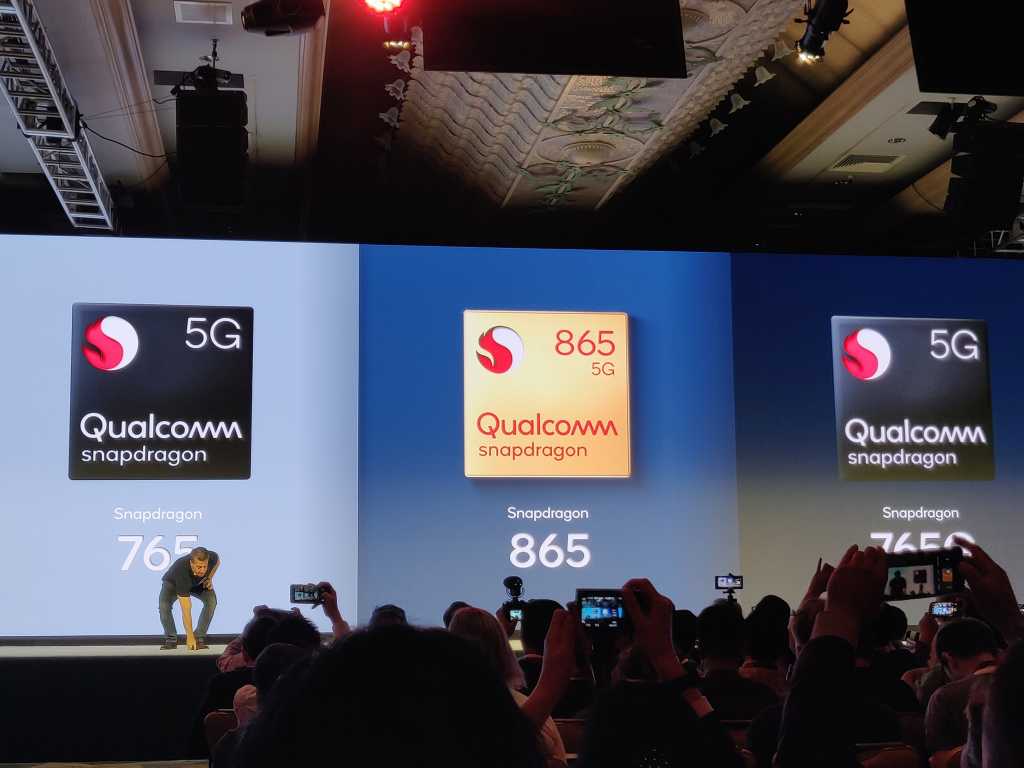 Qualcomm uncorked this year’s version of its Snapdragon Technology Summit in Maui, Hawaii, by announcing the names of its two new upcoming Snapdragon chips, the Snapdragon 865 and the Snapdragon 765/765G. Not surprisingly, the emphasis this year is on 5G, and the “AI” those chips will apply for software enhancements.

Because this is the Snapdragon Technology Summit, we expect to hear more details of each of these chips in the coming days. For now, however, Qualcomm is just teasing the names and their basic capabilities.

Qualcomm opened its keynote by talking about the potential of 5G.

“One year ago, we were talking 5G future. In 2019, we’ll be talking about 5G,” said Cristiano Amon, Qualcomm’s president. Forty operators and forty OEMs across the world are investing in 5G, he said. By 2021, there will be more than 2.8 billion subscribers, with more to come.

Amon made the case that converting from 4G LTE to 5G will be easier than expected, with the possibility for mmWave to be added to 65 percent of San Francisco cell sites, for example. With dynamic spread spectrum (DSS), basestations can radiate both 4G LTE and 5G at the same time, he said. “Reports are comng out that mmWave are performing better than anyone thought. Non-line-of -sight, 200Mbits, 14 hours of power” for handsets, he said.

“We’re going to have a faster migration to 5G than any other generation of wireless,” Amon said.

The high bandiwdth of 5G is pushing the cloud closer to edge devices like phones and PCs, creating “super apps,” and making the operating system less important, Amon said. “The ability to connect the cloud to the device will crate a entirely set of new experiences,” he said.

Carriers and device makers also appeared on stage to tout their 5G coverage.

Nicki Palmer, chief product development officer at Verizon, said that Verizon has had “real, live 5G” in place for about a year, with 18 cities in 2019, and 30 by the end of the year. There’s 5G in 14 NFL stadiums as well, she said.

In 2020, Motorola will launch 5G products globally, said Sergio Buniac, president of Motorola, including the “fastest 5G phone possible,” he said. Juho Sarvikas, chief product officer of HMD (branded as Nokia) also appeared on stage to pledge a commitment to use the Snapdragon 765.

Qualcomm’s Snapdragon chips are some of the most prevalent processors in smartphones and a mainstay in high-end flagships, powering the Samsung Galaxy S10 and OnePlus 7 Pro among others. Both of these phones incorporate the Qualcomm Snapdragon 855 that was introduced at last year’s Snapdragon Summit, and it’s fair to say we’d expect the eventual successor of those phones to use the new chips, as well.

“Across almost all of our [platform] tiers next year will be 5G capable with AI added in,” Katzouian said.

Specifically, Katzouian said, the Snapdragon 865 will be built around the Snapdragon X55, Qualcomm’s second-gen 5G modem that the company launched in February of this year. The X55 was part of the ”Project Limitless” PC platform Qualcomm showed off with Lenovo at Computex, but is expected to be much more of a factor within smartphones. However, Qualcomm showed off the Snapdragon 865 chipset with a discrete X55 modem attached, in order to reproduce the functionality of the front end on other devices.

Lin Bin, the vice chairmain of Xiaomi, appeared on stage to announce the Mi 10, which will be use the Snapdragon 865. He also tipped an additional Snapdragon 865 features: 960 frames per second decoding. He also showed of a real-world photo, captured with a 108 Mpixel sensor.

The Snapdragon 765 provides a cheaper option

While the Snapdragon 865 will obviously be the premium smartphone platform, aimed at flagship phones, recall that Qualcomm also announced what it called the “Elite Gaming Platform” as part of the 855, with some tweaked features in its Adreno GPU. It later launched the Snapdragon 730 and 730G, which featured a faster Adreno 618 GPU optimized for mobile gaming.

Qualcomm appears prepared to pull some of those out into the Qualcomm Snapdragon 765 and 765G, which will bring “integrated 5G connectivity, advanced AI processing, and select Snapdragon Elite Gaming experiences,” Qualcomm’s Katzouian said. Camera functions on the 765 will support 192 Mpixel still images, 4K HDR captures, alongside the company’s 5th-generation AI core. with Elite Gaming features.

By comparison, the Spectra 850 ISP built into the Snapdragon 855 added portrait mode to video, in addition to just still images. That Spectra could also capture 22 megapixels at 30 frames per second using concurrent dual cameras; or 48MP at 30fps using a single camera. The 855 added 4K, HDR10+ video capture in portrait mode at 60fps.

Last year, Qualcomm launched the X50 modem as part of the Snapdragon 855 platform, but the modem was a discrete component supporting the longer-range sub-6GHz bands, as well as the short-range, high-bandwidth “millimeter-wave” technology. With the 765, Qualcomm appears to be integrating the X52 modem, which supports 5G. The 765 will allow up to 3.7Gbits/s downloads into the device, via the X52.

Qualcomm also sees AI differently than, say, Intel. In the smartphone space, “AI” is mainly used to enhance smartphone photography and video, allowing for computational photography that goes beyond the physical limits of the lens. However, the Snapdragon 855 incorporated the Hexagon 690 DSP, which was retooled for AI. That logic powered functions like the always-listening “wake words,” like “OK, Google.”

Qualcomm closed with one odd feature that’s not specifically tied to a chip: the 3D Sonic Max, a two (yes, two) finger fingerprint sensor. How odd is that?

Want more? Qualcomm promises a deeper dive on each of these new chips on Wednesday.

This story was updated at 11 AM Hawaii time with additional details.