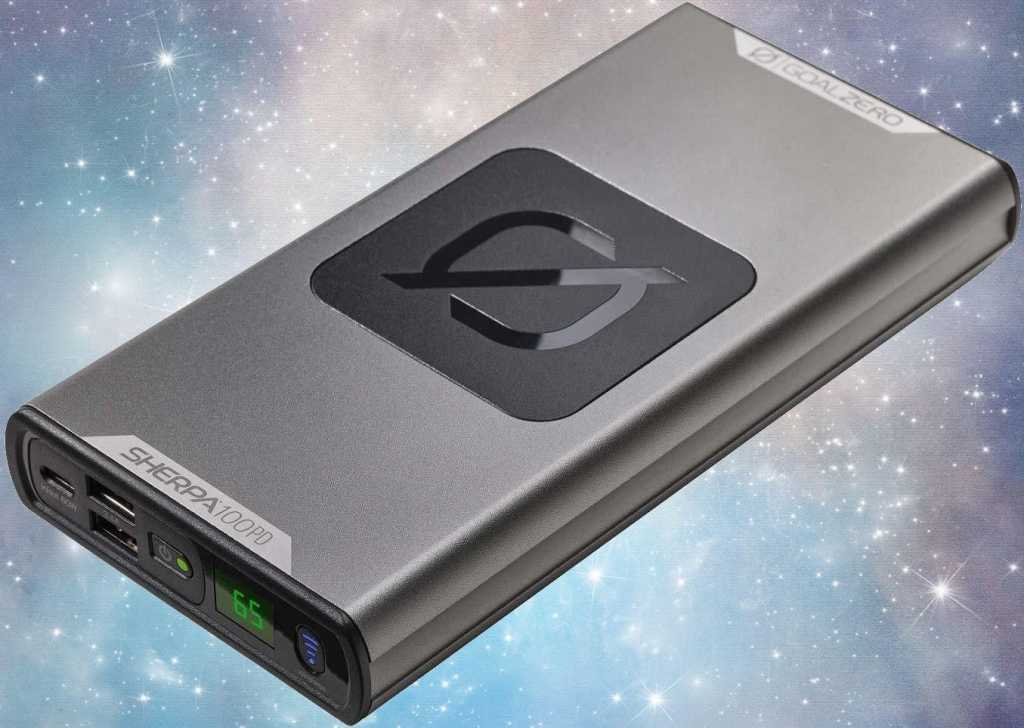 Image: Goal Zero
At a Glance

For the past few months, the Goal Zero Sherpa 100PD has been in my backpack for every business trip I’ve gone on, and I don’t see that changing anytime soon. It’s not the lightest battery pack, weighing in at 1.4 pounds, and I definitely notice that it’s in my bag, but it has essentially replaced the power strip I would bring with me on trips.

On the front of the Sherpa 100PD is a USB-C Power Delivery (PD) port, two USB-A ports, a power button, a display that shows the pack’s numerical charge level, and a button that turns on wireless charging. The USB-C port is two-way, meaning that you use it to both charge the pack itself and to charge Power Delivery devices. Included in the box is a USB-A to USB-C cable.

On the top of the metal housing is a wireless charging pad emblazoned with the Goal Zero logo. The Qi-compatible pad can pump out 5W of power and was able to charge an iPhone 11 Pro Max from empty to 21 percent in an hour. That makes this one of the slowest wireless charging pads I’ve tested, so unless you plan on leaving your phone on the pad overnight, I’d suggest using a wired connection.

Another issue with the wireless charging pad is that it’s bordered by metal trim. If you’re like me and don’t use a case for your phone, that trim is going to scratch the back of your handset over time. If you use a case, it’s a non-issue, but it sure feels like a design oversight.

On the plus side, the Sherpa 100PD is powerful enough to charge most portable laptops with a maximum output of 60W, and a total capacity of 94.7Wh. In testing, the Sherpa 100PD pumped out 77.2Wh, giving it an efficiency of 81.52 percent; that’s just below the average of 82.64 percent efficiency in our testing.

Using Anker’s PowerPort Speed PD, I was able to charge the Sherpa 100PD in 4 hours and 2 minutes, much faster than I anticipated.

At $135, the Sherpa 100PD isn’t cheap. It’s also big, and somewhat bulky, but I’ve taken two separate trips and used it to charge my iPhone 11 Pro Max, a Pixel 4 XL, and iPad Pro and have yet to come back with the pack under 40 percent.