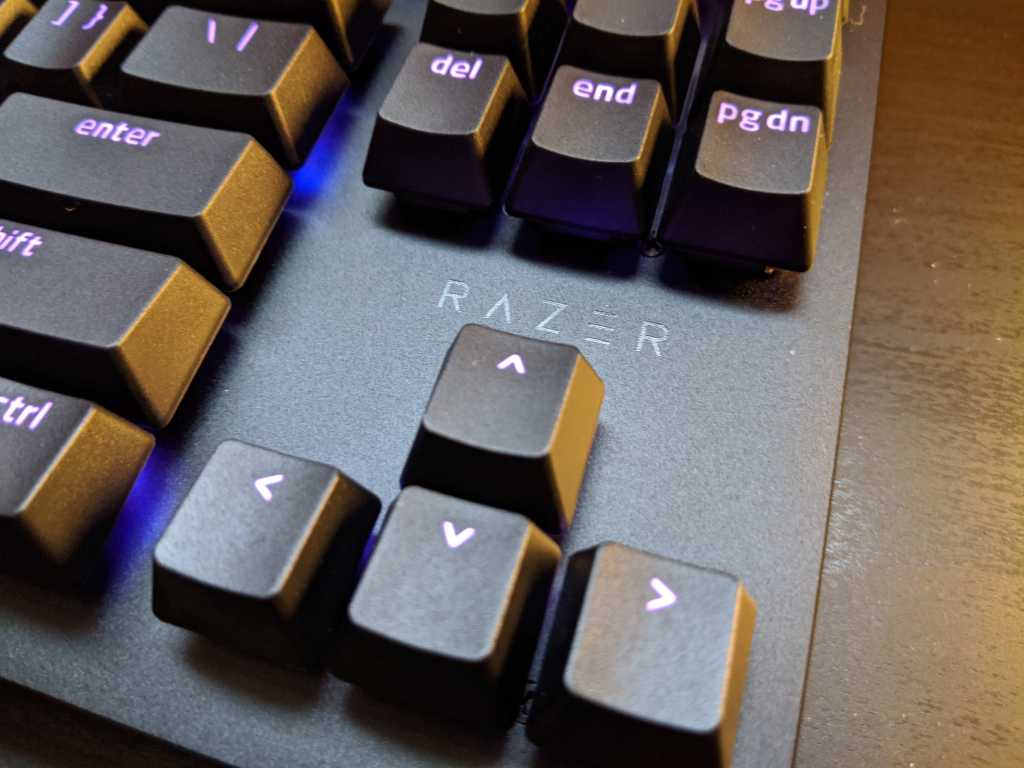 Razer’s Huntsman TE is one of the few keyboards (or maybe the only one) that combines optical switches, PBT keycaps, backlighting, and a portable tenkeyless design. Chances are you know whether you need it or not.

About a year ago we reviewed the Razer Huntsman Elite, arguably the first mainstream foray into optical keyboard switches. And uh…the only one, really. Optical switches still haven’t made much headway against traditional mechanical keyboards.

I’m tempted to say the Huntsman TE is out of character for Razer, but that’d be doing Razer a disservice. Sure, I mostly associate Razer with flashy hardware. See: the original Huntsman Elite, which packed RGB LEDs into its detachable wrist rest, one of the most over-the-top design elements I’ve ever seen.

But for every RGB wrist rest or mouse pad, Razer’s got a device like the Huntsman TE. Stripped down and simplified, the idea (I guess) is that pros don’t need all the distractions that come standard on Razer’s other models. The Tournament Edition is pure. All performance, and nothing more.

Who’s to say if this is really what pros want. The fact is, like Logitech’s corresponding Pro line, Razer tests a lot of interesting ideas under its “esports” brand.

Case in point, the Huntsman Tournament Edition is the first Razer keyboard to boast double-shot PBT keycaps. Popular in enthusiast circles for years now, PBT is a thicker and more durable plastic than the ABS alternative used on most keyboards. As a bonus, it’s also more resistant to that sheen that develops on oft-pressed keys.

Will the average person be able to tell the difference, or even appreciate a difference? Unlikely. The Huntsman TE keycaps look identical to Razer’s other keyboards, black squares emblazoned with a thin sans-serif typeface. Maybe—maybe—you’d notice a slight thickness to the plastic, or a deeper thock when a key bottoms out. But it’s unlikely.

It doesn’t matter though. The benefits exist regardless.

Enthusiasts benefit as well. With a company this size now machining PBT, prices are sure to go down. Razer’s standalone keycap replacement sets list for $30, significantly lower than popular enthusiast brands like Ducky, Vortex, and Tai-Hao. And they’re backlight-ready, a rarity for PBT keycaps.

Razer’s done well, in other words. That doesn’t necessarily mean enthusiasts will convert to Razer’s keycaps, but they’re an easily accessible option for those not steeped in mechanical keyboard culture. And where Razer goes, I’m sure Logitech and Corsair can’t be far behind. PBT might soon be the norm, not the exception—at least as a premium option for those willing to pay.

I liked the Purples, but I’m less sold on Razer’s Reds. Gaming keyboards have been trending towards lighter and lighter switches the past few years, and Razer’s Reds reach a new extreme. Cherry MX Speed/Silver switches are common on Corsair and other boards, and boast a 1.2mm actuation at 45 grams of force. Razer drops this even further, to a 1.0mm actuation at 40 grams of force.

Optical switches are usually smoother than their mechanical counterparts, and indeed the Razer Reds are pleasant in isolation. They’re so damn lightweight though, simply resting my fingers on the keys is enough to actuate them. That’s not so much an issue while gaming, but even after an adjustment period I find them a detriment to day-to-day typing.

I also continue to take issue with Razer’s marketing around optical switches. First, some background from our original Huntsman review:

“In a standard mechanical switch you press down the key, metal contacts metal, a circuit is formed, and the computer then interprets that circuit as the key in question. With optical keyboards, the process is almost exactly the same except instead of metal, the switch uses light.”

Only for the last centimeter or so of the circuit though. Razer’s really set on selling this whole “speed of light” thing, but do you know the difference in transmission speed between a centimeter of laser and a centimeter of circuitry? For our purposes, both are essentially instantaneous. It’s a nonsensical distinction. Yes, probably even for pro gamers.

I hate misleading marketing like this, not least because it does a disservice to the actual benefits of optical switches. To pull another line from our original Huntsman review, “You can spill a beer on your keyboard and it’ll probably work still.” The laser-based mechanism at the heart of optical switches is more resilient than metal-on-metal contacts.

And that has ramifications for the overall lifespan of the keyboard. Traditional switches are rated for a certain number of keystrokes—50 million, in the case of Cherry MX. Optical switches more than double that, testing at 100 million keystrokes. It’s unlikely you’d hit either of those caps, as 50 million strokes on your most-used key translates to 20 years of typing on the low end. But the fact remains, optical switches are slightly less prone to developing issues.

Still, I wouldn’t necessarily recommend the new Red switch. Razer’s clicky Purple optical switches are a solid alternative to other tactile switches like Cherry MX Blues and Razer Greens, particularly for those edge cases (like people who really mash on specific keys) where optical might provide more longevity. But Razer only sells the Tournament Edition with the new ultra-light Red switches, and I simply can’t imagine using them as my day-to-day. If you skew 90 percent gaming and 10 percent typing, maybe, but the low resistance and tight actuation cause more problems than they solve. We’ve reached a point of diminishing returns.

Anyway, I’ve saved discussing the Huntsman TE’s build until last because there isn’t much to say. It technically falls under the Huntsman line, but this stripped-down version couldn’t be further from the RGB-laden Huntsman Elite we tested last year. It has no wrist rest, no dedicated media keys, no numpad, no frills at all.

For some people, that’s a perk. If you just want a basic black rectangle with a detachable USB-C cable, it’s hard to go wrong with the Huntsman TE. That’s not my preferred style of board, but I’m not going to fault Razer for that.

The Huntsman line mostly interests me because Razer is taking risks. It bet big on optical switches last year, then introduced a new optical switch this year. And now it’s dabbling in PBT keycaps as well. With the mechanical keyboard market essentially “solved” or stagnant, it’s interesting to see Razer make bets on the future. Safe bets, pioneered by enthusiasts long before Razer arrived on the scene, but bets nevertheless.

As for the Huntsman TE itself, I think it’s a perfectly fine keyboard if you can stomach the Red switch’s low resistance. The price is steeper than I’d like, and $150 is significantly more than you’d pay for a tenkeyless board with more traditional switches—even factoring in a set of PBT keycaps. The Huntsman TE is one of the few keyboards that checks all the boxes though: tenkeyless, backlit, PBT keycaps, and optical switches. Maybe the only one. Chances are you know if that’s what you need.