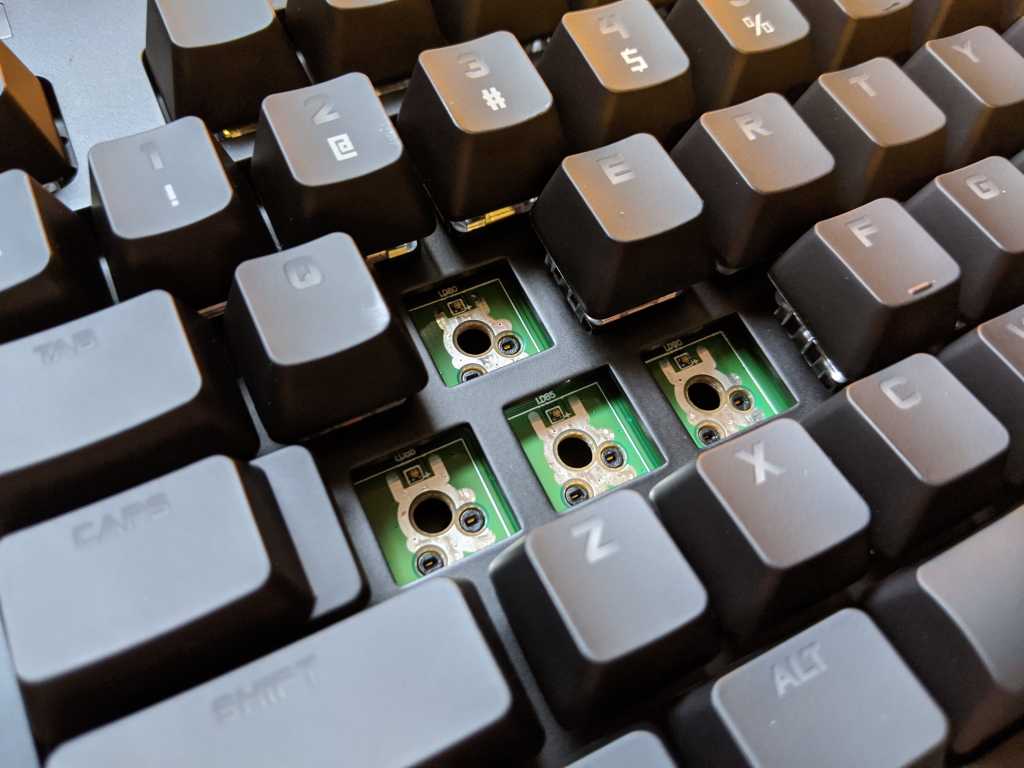 The Logitech G Pro X is a keyboard for enthusiasts only—and only a specific kind of enthusiast, at that. Unless you plan to mix and match different switches, there is no reason to buy this. But it’s fun.

Spend enough time with any niche hobby and you’ll start to intuit what’s likely to become mainstream in the future and what won’t. With mechanical gaming keyboards, there are a number of trends I expect to see popularized in the near future. The more resilient PBT plastic is an obvious one, and indeed we see Razer experimenting with that on its latest Huntsman Tournament Edition keyboard. Optical switches are another feature that Razer has toyed with. Low-profile keyboards are also gaining in popularity. Custom keycap designs? Telephone cables? Hell, Topre switches? Maybe, maybe, and maybe.

But I can definitively say: I never saw the Logitech G Pro X coming. I still find it hard to believe it exists. Of all the novel features that enthusiasts are passionate about, hot-swappable switches seemed a long shot for any mainstream manufacturer—and yet here we are.

I hope you’re ready to mix-and-match.

Before we get into key-pulling, best to cover the G Pro X as it exists out-the-box. It’ll look mighty familiar to Logitech fans, as it’s essentially identical to the existing Pro keyboard—which is, in turn, a sort-of tenkeyless version of the G213.

Logitech is consistent, in other words. Like most of Logitech’s modern boards, the G Pro X is a standard black rectangle, unadorned but for the backlit “G” typelogo in the upper-left corner. That forehead also plays host to two circular buttons, for Game Mode and brightness, plus indicators for Caps Lock and Scroll Lock. Media controls are printed on the front of the F9 through F12 keys, as well as the Print Screen, Scroll Lock, and Pause keys.

And…that’s pretty much it. Logitech’s designs are simple and unobtrusive nowadays, and the G Pro X even more than usual since it lacks any standalone media buttons or macro keys. This is about as stripped-down a keyboard as you can get, at least at first glance.

No wrist rest, no standalone media keys, no frills of any kind—and yet the G Pro X costs $150. That seems steep, yeah? And admittedly, the lack of a wrist rest is sorely felt given the price. Logitech’s magnetic wrist rest has been a standout since its introduction alongside the G610, and while the G Pro X is geared towards tournament use I’d still have welcomed the inclusion.

Really you’re paying for what’s under the hood, though. As I mentioned up top, the G Pro X is what’s known as a “hot-swappable” keyboard. Let’s delve into what that means.

Unless you’re a mechanical keyboard enthusiast it’s unlikely you’ve thought long and hard about how they’re built, but it’s really rather simple. You need two components: the switches and a PCB, or printed circuit board. The switches are the part you type on, and the PCB is the electronic brain that conveys what key you pressed to the computer.

Now just solder them together.

That’s it! You’re done! Dress it all up with a case and some keycaps, and you’ve officially built a keyboard. A rudimentary one, sure, and most keyboards include backplates, stabilizers, and other components to improve the typing experience. But this is essentially how mechanical keyboards are built: Switches, PCB, solder.

Solder makes replacing switches a pain in the ass. And why would you want to replace a switch, you might ask? Utility, sometimes. Maybe a switch is malfunctioning, so you crack open the keyboard, de-solder the existing switch, and replace it. Maybe.

Keyboard enthusiasts love tinkering though, love trying out new switches, even love mixing different switch types together on the same keyboard. Maybe you prefer the clicky tactile feeling of Cherry MX Blues for typing, but the speed and low actuation of Cherry MX Silvers for WASD and other common gaming controls. Or maybe you love the low resistance of an MX Silver board but want a heavier spacebar.

Traditionally you’d need to either build your own keyboard to preference or buy one off the shelf, de-solder each individual switch, and replace them with ones of your choosing.

The “hot-swappable” G Pro X, however, makes such customization easy. You can replace the switches without opening the keyboard. The switches are self-contained units, socketed instead of soldered. Think of them like fuses, or puzzle pieces. You simply pull the switches out the same way you’d pull off keycaps.

It makes tinkering easy. Logitech sells switch sets for $50 a pop, a steep price if you only want a handful of switches instead of a full board replacement. But the option is there, if you’d like complete control over your G Pro X. Logitech sent us a “GX Blue” keyboard with Brown and Red replacement sets. I’ve now got a hybrid Blue and Red G Pro X, and all it took was a few minutes and swear words. (Yes, GX switch colors are roughly equivalent to their Cherry MX counterparts. They’re actually Kailhs, as evidenced by the badge on the switches.)

The G Pro X isn’t the first hot-swappable board, but it’s got a clean-looking socket design and makes the process intuitive and approachable for those with little experience. Even the space bar and other elongated keys are easy, as Logitech’s used plastic mold stabilizers instead of the finicky metal rods common on low-end keyboards.

Do I expect many people to take advantage and mod their keyboards? No, and that’s why I’m surprised to see Logitech enter this market. This is a niche niche—and destined to remain niche at these prices. I’d like to see switches sold in smaller quantities, lowering the barrier for people who want to try out hybrid configurations. $150 for a wired tenkeyless keyboard and $50 for every switch set is a tough sell.

It’s nifty though—and maybe gives us some indication of why Logitech abandoned (or “supplemented” if we’re being kind) its Romer-G switches for the Cherry MX-style “GX” switches. I assume it’s a lot easier to experiment with a form factor that everyone else is using, and I wouldn’t be surprised if we see Logitech trial balloon other trends soon. PBT keycaps seem an obvious choice, as I said in the intro. Once you’ve let people customize the interior of their keyboards, might as well let them customize the outside too.

Speaking of common form factors: One aspect I wasn’t able to test for our review is whether the G Pro X’s sockets are compatible with Halo Trues, Outemu’s DIY line, or other hot-swappable switches. I’m pretty sure they are, given they appear to be standard Kailh three-pin switches, so you might be able to save a few dollars and buy third-party switch sets in smaller quantities. Buyer beware, though. Even if it works, it’s obviously not supported in any official capacity by Logitech.

The Logitech G Pro X is a keyboard for enthusiasts only—and only a specific kind of enthusiast, at that. Unless you plan to mix and match different switches, there is no reason to buy this. It’s currently $200 just to get a keyboard and a single additional switch set, while a more traditional (i.e. soldered) G Pro keyboard lists for $130.

I find it interesting though, if only because it indicates that Logitech (like Razer) sees potential in the enthusiast market—or at least in exposing hobbyist ideas to a larger audience. And why not? After all, mechanical keyboards were themselves a niche less than a decade ago, and are now commonplace. What will be the next big trend? I’m excited to find out, and to play with all the weird experiments along the way.