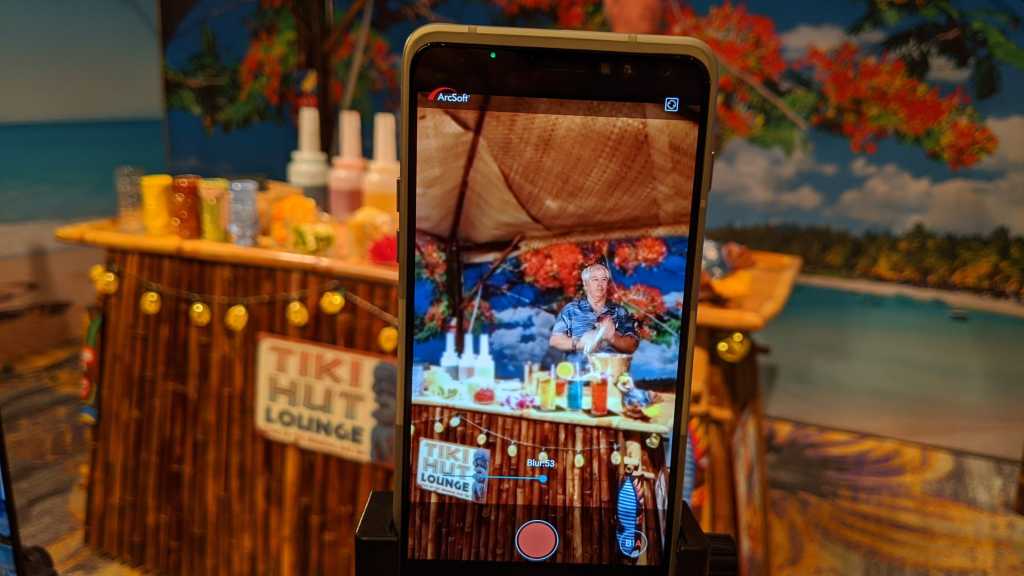 Qualcomm described the Snapdragon 865 in detail on Wednesday, with a long list of new features that included 5G, PC-like gaming features, high-resolution camera imagery, and much more.

At the Snapdragon Technology Summit in Maui, Hawaii, Qualcomm set up a demo room where we could go hands-on with some of the features. We took the opportunity to shoot some short videos to go with our descriptions, and you can see them all below.

The Snapdragon 855 first introduced bokeh to video captured with the smartphone camera. The 865’s implementation differs in two ways: It uses a single smartphone camera to achieve the effect, and it uses AI to identify the subject—the same technique it uses for slo-mo video. In the demo we saw, it worked most of the time.

And no, we didn’t get a drink out of it.

Yes, that seems like a bunch of gibberish—which is probably why Qualcomm felt it necessary to show what it means in the real world. Imagine a concert, or a football game, or a school play—somewhere where multiple users might be streaming video over Wi-Fi to others who aren’t there.

If you’ve ever downloaded something over Wi-Fi, you know that speeds can be excellent, depending on the available bandwidth. Upload speeds, though, usually stink—whether it’s the paltry available upstream bandwidth or limitations on the Wi-Fi.

This is a demo that allegedly shows the competition—we don’t know who, or what. But if Qualcomm’s trying for smooth streaming, that’s a plus.

Just for the record, the subsystem here is the Qualcomm Fast Connect 6800 with Uplink MU-MIMO support. Say that five times fast.

And no, we don’t know how this would compare against streaming over 5G.

Snapdragon 865-powered cameras will capture 4K video at 120 frames per second, for a “4X” slow-motion option. At a more standard 720p resolution, the Spectra will go much, much further, capturing an amazing 960 frames per second up to the limits of the available storage. It appears that we’re seeing something in the middle of that: 1080p video, at 240 frames per second.

Note that this is AI-driven: There’s no “tap to focus” control, so it’s up to the camera to select what’s interesting. Real-world demonstrations that don’t work perfectly (like this one) are great for showing off the potential, as well as what needs more refinement.

The lack of left-handed golf clubs was disappointing, too.

This is near and dear to my heart for obvious reasons: Journalists are always looking out for transcription services to make our lives easier. (We still run into problems: As I wrote this, there was some question whether a Qualcomm executive I quoted was referring to the “Snapdragon 855 Plus,” or the “Snapdragon 855 plus [some other chip]”.)

Transcription already exists via Otter.ai, Google’s own automatic speech recognition, and Microsoft’s services. Combining them with translation is the next step up. Remember, Qualcomm’s not doing this with the power of the cloud, but on-chip… and doing it sort-of well. Note: Video contains some transcription of some bad language, which I think was a mistake in translation.

If you’re at all interested in automated transcription, this is one to watch.