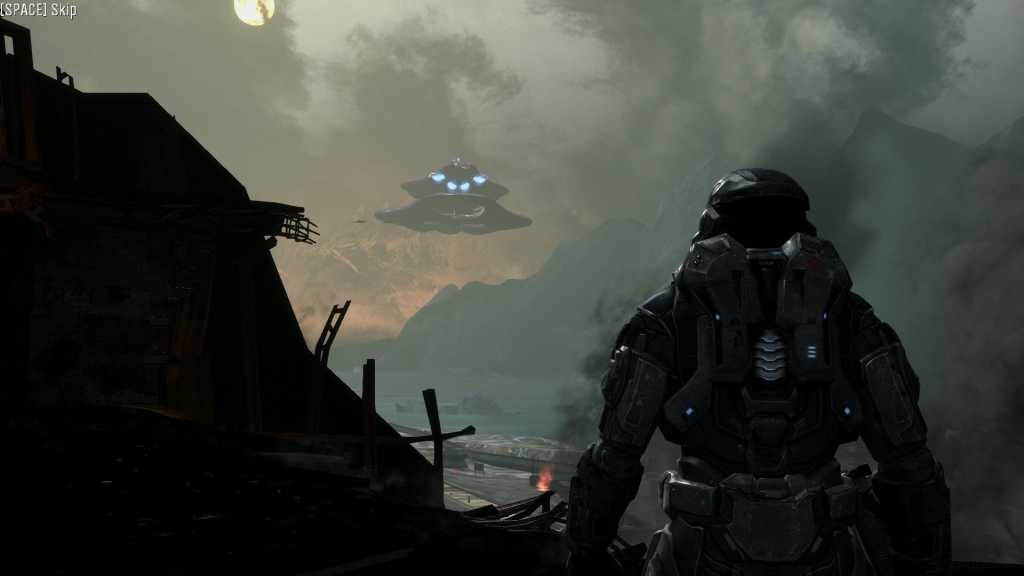 The original plan, if I recall correctly, was to have the entire Halo: The Master Chief Collection on PC by the end of 2019. Alas, that’s not going to happen. But 343 Industries did manage to get Halo: Reach out before the end of the year, the first Halo game to hit PC since Microsoft’s ill-fated attempt to use Halo 2 to sell copies of Windows Vista back in 2007.

So how is it? I won’t lie, it’s kind of janky. Given how many rounds of testing Reach went through this year, I expected a more exhaustive PC version. But it works! If that’s all you care about, if you simply need to satiate your nostalgia…well, you’re probably already playing. After all, Halo: Reach “reached” the top of the Steam sales charts on release day.

If you want to know what works and what doesn’t though, read on.

First, let me say: I understand Halo: Reach is a remaster of a decade-old game. It’s been given a new coat of paint, but not a very extensive one, and thus is bound to run on basically any machine at maximum settings.

That said, when I got some hands-on time with Reach at E3 I wrote that “I didn’t see anything in the way of graphics settings, but I assume those will be in there at release.” Come release day…nope. Still no graphics settings—or at least, not to the extent you’d expect. You have your choice of three locked-down presets: “Performance,” “Original,” and “Enhanced.” I imagine these are the same options as the Xbox One X, though I haven’t checked.

I did toggle between the three in numerous environments, and mostly noticed differences in draw distance—and even then, mostly between the “Performance” and “Original” modes. With “Performance” enabled, objects in the middle-distance (particularly trees) devolve into abstract polygonal blobs. Moving to “Original” greatly increases the distance at which this happens, enough so that I really had to hunt for examples to show a difference between it and the “Enhanced” mode.

As I said, most modern PCs will run Halo: Reach maxed-out, even at higher resolutions. It’s aged well, but it’s definitely aged, and some slight improvements to textures and terrain aren’t enough to mask that fact. Logically there’s no real reason to include graphics options when most people will just set everything as high as it will go. And yet I find it somehow strange Reach doesn’t even pretend—especially since I’d read that the Reach beta tests did have more granular settings earlier this year. Where’d they disappear?

Field of view has been expanded since my last hands-on, at least. As I said at E3:

“[Field of view] is one of the more complicated hurdles 343i’s been struggling with for Halo’s PC version. The console versions of Halo were all designed to run at a specific FOV, and animations were rendered with that in mind. Changes can theoretically lead to some bizarre behavior, like Master Chief’s arm detaching from his shoulder as he throws a grenade.”

The E3 demo was capped at an FOV of 90. The release version goes up to 120 degrees (I’ve been sticking to 105) which is a relief because Halo: Reach’s guns take up an absurd amount of screen real estate.

That’s due in part to another change to the PC version, though this one’s optional. I’d forgotten that Halo traditionally offset the crosshair towards the bottom of the screen instead of placing it in the center. Presumably this allowed the player to see more of the world, since the console FOV was so tightly constrained.

Reach on PC defaults to a centered crosshair, which causes the guns (and your arms) to take up a ton of space at the standard 70-degree FOV. Ramp it up to 90 or more though and it starts to feel more normal.

Or you can switch back to the offset crosshair, if you’re a sadist.

If you’re buying Halo: Reach on PC, I assume it’s because you want to play Halo with a mouse and keyboard. Good news is, you can. The bad news is it’s going to take some adjustment.

I’m surprised at some of the choices here, some of which I mentioned at E3. Case in point: You switch weapons by tapping the “1” key. Just the “1” key. Tap it once, you switch to your secondary weapon. Tap it again, you switch back to your main. Scrolling the mouse wheel back and forth does nothing at all, and tapping “2” to access your secondary weapon like you would in any other PC shooter ever instead changes your grenade type.

You can try and remap it, and you should. I’ve settled on “Mouse Wheel Up” to cycle weapons. Scrolling down still does nothing, but at least it’s almost normal.

But it’s a choice so baffling I have to imagine it’s fundamental to the engine, some deep-down coding issue that’s impossible to overcome. Halo always shipped with multiple control layouts, but like any console game it was always one button per action. My suspicion is that limitation carried over to the PC, so 343 could only work with one key at a time and did the best they could.

That’s a generous read, but it’s the one I’m operating under until I hear otherwise.

Anyway, it’s still pretty nifty playing Halo: Reach with a mouse’s precision. I’m trending towards weapons like the DMR, Carbine, and Pistol which have the ability to (sort of) aim down sights like a standard 2019 shooter. Picking off Grunts and Jackals is relatively easy compared to the console version, given both go down with a single headshot. Elites are the only enemy I find frustrating, as they’re still incredibly bullet spongy, especially on Heroic and Legendary difficulties. It feels weird to pump round after round into their mandibled faces with zero feedback.

Feedback is an issue in general, actually. Like Gears of War 4, Reach’s weapons lose a bit of their oomph in the transition to PC. I never really knew how much controller rumble contributed to the feel of Halo until I lost it. And that goes for hit indicators as well. I’ve died more than a few times because I didn’t even realize I was being shot until it was too late.

Add it all up, and I’m almost tempted to cave and play with a controller. That feels like heresy, but the mouse and keyboard feel like a compromise, not an outright improvement. What you gain in precision, you lose in…well, pretty much every other aspect.

It really makes you appreciate how much work Bungie must’ve put into bringing Destiny 2 to PC, given it was built with the same console-first mindset but plays as good or better on a mouse and keyboard.

Should it bother me that I need to sign in to my Microsoft account to play Reach on PC? Maybe…but it doesn’t. Microsoft’s come a long way since Games for Windows Live, and quite frankly Halo: Reach is one of the least offensive by modern standards. If you buy the game through Steam, it doesn’t first pop the Windows 10 Store open before you can play. There’s an in-game login screen, and that’s it.

Given how deeply Microsoft accounts are tied into Windows 10, chances are you already have one. If not, it’s easy to get one. Hell, I’m pretty sure mine’s tied to a Gmail account, not even a Microsoft service.

Still, it’s something to be aware of before you buy. As a bonus, if you’ve played The Master Chief Collection on Xbox One and sign in with the same Xbox Live account, you’ll automatically pop the equivalent Steam achievements.

Concerns aside, I’m excited to have an excuse to dip into The Master Chief Collection again. Halo: Reach isn’t the game I’d choose to start with, as by the time it released I’d almost completely transitioned to first Call of Duty and then Battlefield. I have way more nostalgia for Halo and Halo 2, and a fondness for ODST’s genre-bending weirdness.

But Reach has its charms. The war movie cinematography, the doomed-from-the-start setup, the colorful comrades-in-arms, it’s all very different at least.

Ambitious too, and it’s easy to draw a line between the more sprawling environments of Reach and what Bungie did next with Destiny. Reach is more primitive of course, and suffers from some strange pacing and repetitive objectives as a result, but it’s still a pretty neat capstone to the Halo-that-Bungie-built.

Plus, that ending. I’m excited to see it again.

Get me Thomas the Tank Engine

I’m also excited to see what happens with the mod community. Aside from mouse-and-keyboard controls, that’s the best reason to play on PC.

343’s facilitated mod support by providing two different launch options for The Master Chief Collection. The default includes anti-cheat measures to try and ensure the integrity of the multiplayer experience. You can also launch the game with anti-cheat disabled though, which disables achievements but allows you to do pretty much whatever you’d like outside of matchmaking.

It’s not quite seamless, as you’ll need to restore the unmodded file directory to access matchmaking again if you changed anything. 343’s said it’s working on a more elegant solution for the future, and official mod tools as well. Still, this is a good start.

Nostalgia will probably carry Halo: Reach and the rest of The Master Chief Collection even if the ports aren’t great. That’s the short of it. I’m hoping 343 can fix some of my issues, especially with the controls, but it’s a faint hope. As I said, 343 ran a multitude of beta tests this year, enough to delay the release by six months or so. The fact that these problems weren’t ironed out makes me worried they can’t be.

Just keep it in mind, that’s all. There are a lot of caveats at the moment. But hey, it’s Halo on PC right? The original Halo is reputedly due in early 2020, with the rest of The Master Chief Collection to follow throughout the year. See you in Zanzibar.