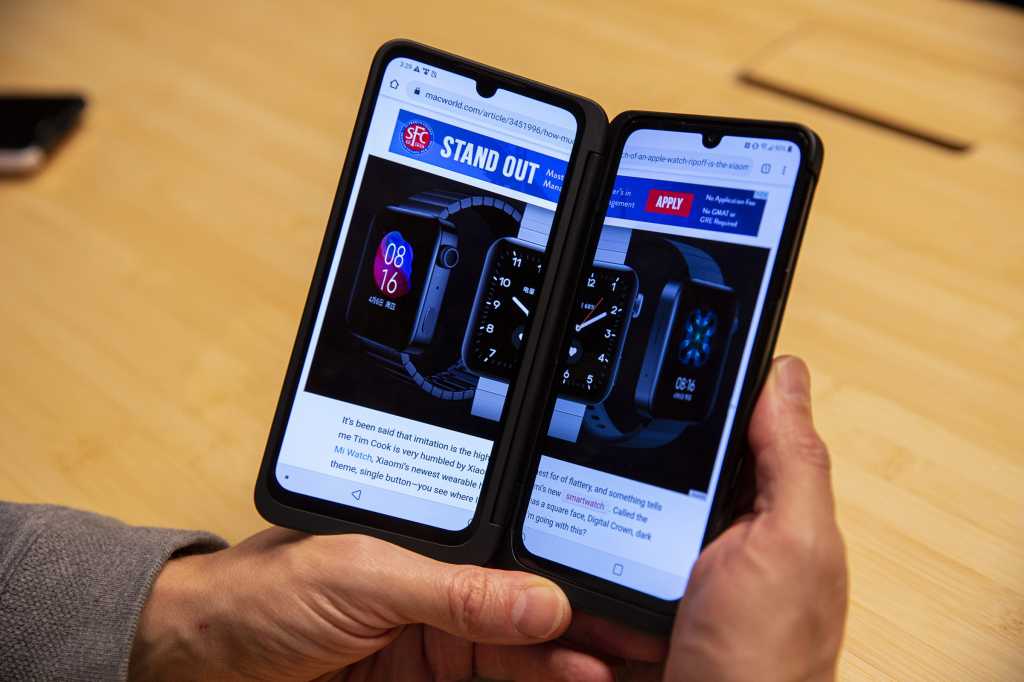 The LG G8X is all about its Dual Screen, and it’s LG’s best gimmick—er effort— in years.

On its own, the LG G8X is a wholly unremarkable phone. It won’t break speed tests or turn heads, or blow you away with nighttime shots. It doesn’t even have the time-of-flight gesture tricks that the G8 has. But none of those things should matter to anyone buying an LG G8X.

That’s because the reason for the G8X’s existence isn’t really the phone itself. It’s an accessory, a case to be precise. LG calls it the Dual Screen, and it actually accomplishes what LG phones have been trying to do for years: add a second screen so you can be more productive. On the V10 it was an inset strip above the main display, on the V30 it was a floating bar, and on the G7 it was the area around the notch. On the G8X, it’s a literal second screen that attaches to the phone via USB-C and looks like you’re holding two G8X’s side by side.

However, while my first reaction to the LG G8X Dual Screen was heavy on the eye rolls, as I spent more time with it, I actually kind of grew to like it. It has its problems—weight and thickness chief among them—and it’s probably not kind of of phone you’ll want to use as your primary device. Under the right circumstances, however, it’s as useful as a multiple-monitor PC setup. And like the Galaxy Fold or the Microsoft Surface Duo, it makes me excited for the future.

In an age when every phone is trying to one-up its competitors with bigger screens, extra cameras, and mounds of memory, the LG G8X is a wallflower. Its excellent processor and very nice display merely keep up with the crowd of Android phones already shipping, even when compared to the G8 that launched in the spring. Meanwhile, the Galaxy S10 and OnePlus 7T have more RAM, bigger batteries, and better displays:

Even the design is kinda blah, with the usual notch, forehead, chin, and bezels, along with a glass-and-aluminum construction. Like the G8, the rear camera is fitted under the glass, which is silky-smooth to the touch. But its headphone jack and excellent audio continue to be among LG phones’ best qualities.

There’s no fingerprint sensor on the rear or time-of-flight sensor for 3D face unlock, so LG has turned to an optical in-display fingerprint sensor for secure unlocking and authentication. It’s pretty finicky, and on average it took 3-4 tries before it unlocked. But even when it worked, the process feels slower than with other phones due to LG’s weird procedure: When you put your thumb over the sensor, the entire front screen turns black to help the sensor read your fingerprint. So instead of a smooth animation, you get a jarring screen flash which makes the whole process feel choppier than it should.

The G8X takes perfectly fine photos, but nothing that’s going to challenge the iPhones and Pixels of the world. The ultra-wide lens captures an impressive 136-degree field of view, but there’s some distortion at the edges. Night mode basically ups the exposure without any of the nuance you get with the Pixel 4 or the iPhone 11. While the app performance is a little stuttery—particularly when switching modes—the shutter is snappy, and the manual controls are excellent.

All said, your pictures will be very good, but not Pixel good. The ThinQ AI stuff that takes place behind the scenes does a relatively fine job with sussing out the scene and making the proper adjustments in auto mode, but as you can see in the comparison photos above, the Pixel 4 is far more advanced.

A second screen steals the show

But even if the G8X had the best camera and screen in the business, that still wouldn’t be the reason anyone bought it. That honor falls to the Dual Screen case, which transforms the phone from just another handset to something far more interesting.

The case itself is a powered portfolio not unlike the Samsung LED Wallet Flip Cover. Snapping the phone into place is a simple two-step process that requires you to connect the USB-C plug into the phone and snap the top into position. It’s thicker and heavier than even some battery cases, and it introduces some logistical annoyances—most notably the magnetic adapter that’s required to charge it via USB-C—but for the most part, it’s no less elegant than an OtterBox Defender case.

The outside screen merely gives you a raise-to-wake ambient view with time and notifications. I lost track of how many tips I tapped to no avail. But all is forgiven when you flip it open. That’s when the Dual Screen springs to life, and the G8X becomes unlike any Android phone you’ve ever used.

Inside the front cover is a full second screen that mirrors the main one. It’s the same size, has the same rounded corners, and even has the same camera notch, though there’s no camera. It sounds silly, but it’s a nice bit of symmetry that serves to unite the two screens visually despite the rather large gap between them.

As such, you probably won’t want to use Chrome’s “Wide view” function—which spans a single window across both screens—all that much. It’s fun (or maybe funny) to flip it on to show people that it works, but ultimately it adds little to the purpose of the dual screen. Much cooler is LG’s “seamless” wallpapers that offer a scene that continues on the other display. It’s essentially two wallpapers that work together, so if you want the effect on one of your own photos it can be done, though it’ll require some cropping and saving.

Performance-wise, the second screen doesn’t seen to have any ill effects on the processor. It’s as snappy as you’d expect a Snapdragon 855 phone to be.

Battery life, however, is another story. While I was able to push the battery to better than 13 hours of screen-on time, the Dual Screen barely topped 9 hours. It struggled to make it through a full day—and that’s with significantly lower maximum brightness for the secondary screen (615 nits, vs 825 nits for the main display). Battery life could always improve with a future software update, but because the G8X is still running Android 9, with no indication from LG that an Android 10 update is coming (even after asking), I’m not optimistic.

Folding for the future

It will require some serious retraining of your muscle memories, but once you start using the G8X with the Dual Screen, it’s actually kind of useful. Both screens offer access to your app drawer and shortcuts, so you can open two full-screen apps at the same time (or four if using split-screen). However, unless you’re using Chrome, you can’t open the same app twice, like you can on the iPad.

To that end, the tools you’ll need are available using another of LG’s old tricks, a floating bar pinned to the right side of the screen. Tap it and you’ll see several options:

It’s all self-explanatory and works as expected, but it also underscores how separate the screens are. The second screen appears to be running an older version of Android. For example, you can’t set up gesture navigation, so the old-school bar is always present even if you’ve enabled gestures on the main screen. You also can’t drag apps between the screens or swipe across them, and unless you’re using Chrome or one of the apps LG has optimized for the Dual Screen, you’re basically working in two separate windows.

Gallery is the most successful of the Dual Screen apps, as you can see images on one side while you scroll through you camera roll on the other, but most people will probably stick with single-screen photos. The LG Game Pad turns one of the screens into a landscape controller, but most games aren’t and probably will never be compatible.

More often than not, you’ll be working on separate displays. Take this scenario: If you’re opening a file from an email in the Gmail app or or some other client on the main screen, it won’t open on the second screen as you’d expect it to. There’s also no way to “force” it to do so. So if you want to multitask, you’ll need to copy the link, launch Chrome on the second screen, and paste the link into the address bar.

There are other frustrations. The volume buttons are under the second screen, so they’re tricky to press when it’s opened (plus they’re very stiff). Making a phone call with the screen open—which you’ll need to do to use the phone app—is quite uncomfortable. And if you flip the cover around, you can’t use the rear camera.

The second screen still has lots of potential. Given LG’s tendency to abandon concepts after a single phone (anyone remember the G5’s “Friends?”), I don’t know whether the Dual Screen will be allowed to evolve, but it’s an interesting alternative to the high-priced and fragile folding phones out there. I’d honestly like to see a G9 that goes all-in on the Dual Screen and incorporates it into the phone itself.

But even if LG doesn’t see its vision through, the G8X makes me extremely curious about Microsoft’s Surface Duo, which is supposed to launch late next year. While that phone may come in a sleeker package, it’s essentially the same concept: a dual-screen phone that runs Android. Concept videos show much more interactivity between the two screens. I’ll be interested to see whether Microsoft gets any more developers on board with its own iteration.

Should you buy an LG G8X?

On its own, the G8X is hard to recommend, even at its perennially discounted $700 price tag. But add in the Dual Screen case, which is bundled with the phone no matter where you buy it, and you’ve got something far more interesting than similarly priced handsets from Samsung and Google.

LG’s been pushing its second-screen concepts since the V10 in 2015, so it’s nice to see it come to fruition here. Even when half-baked and unlikely to realize its full potential, the G8X feels more like a culmination of effort than anything LG has done recently. In a few years, folding screens may be all the rage,  and the G8X will seem quaint and comical. For now, it’s a sign of what’s possible with a little outside-of-the-box thinking.