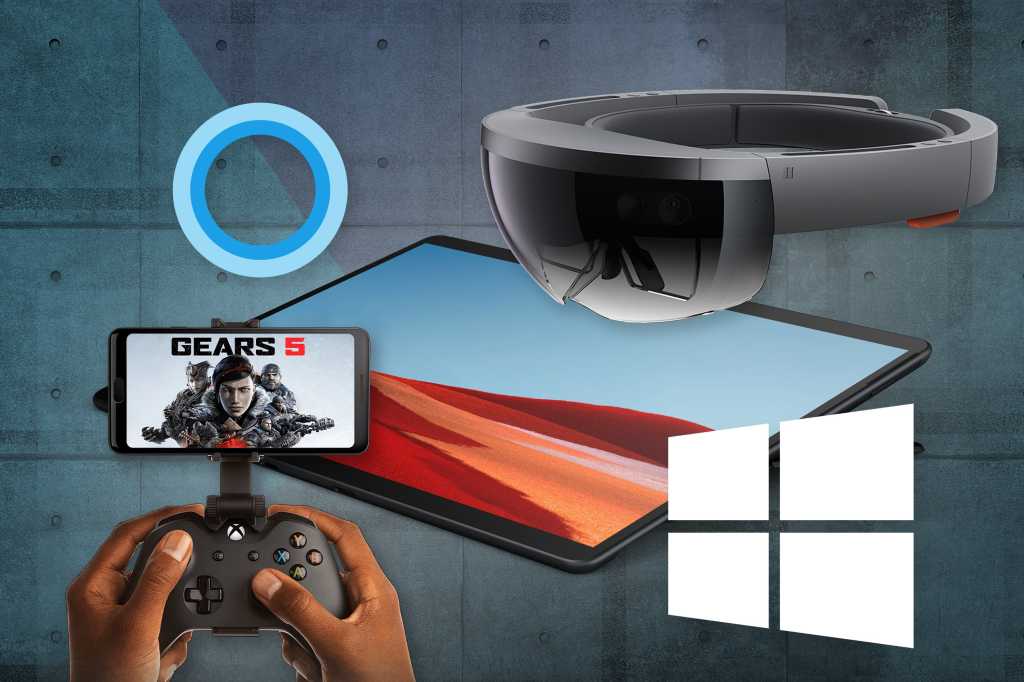 As Microsoft employees clink glasses and toast the holidays, it’s easy to see why. Business is booming, share prices are at an all-time high. Even the future looks bright—with dual-screen Surface devices, and maybe a revised Windows waiting in the wings.

But was 2019 really all that great? Name any feature that you remember from the two Windows feature updates. Are the new Surfaces worth the upgrade?

Okay, so maaaaybe Microsoft’s 2019 was more of a mixed bag. Join us as we take a look at the highlights and lowlights of Microsoft’s year, with a few “what was that?!” moments in there, too.

Historically, lassitude has been one of Microsoft’s chief upgrade obstacles. Consumers find a mix of operating system and apps that works for them, and they stick with it. Well, helped in part by the impending demise of Windows 7, Windows 10 is getting more traction with consumers and corporations. Microsoft opened 2019 by finally topping Windows 7’s market share with Windows 10. The latest operating system now powers more than half of the world’s PCs.

Well, except for Windows 10 Mobile, of course. RIP.

In the past, we’ve complained about Microsoft’s Draconian tactics to force upgrades. But momentum finally seems to have shifted. Oddly enough, though, we still see love for Windows 8 in some corners of the web.

If you fall into the camp of “I’ve found what I like, and don’t change it” (see above), then the relatively mundane Windows 10 May 2019 Update and the supremely dull Windows 10 November 2019 Update may actually be your cup of tea.

Honestly, the May 2019’s Update Sandbox feature was the only standout addition for the entire year—and who are we fooling?—only a handful of dedicated enthusiasts will take advantage of it. Visibility has always been a problem for Windows. Users rarely see cool new additions like kaomoji unless they’re led to them, taught how to use them, and then incorporate them into daily use. If there’s no pizzazz, then you might as well forget it. Of course, there were also the expected bugs, as well as the patch to patch the patch.

Any revamp of Windows is worth pursuing, and Microsoft’s taken the wraps off of Windows 10X, a dual-screen interface that will power the next-generation Microsoft Surface Neo. (The Duo, the other, smaller, dual-screen device, will run on Android.) Windows 10X is supposed to be one of several “experiences” that Microsoft is building on what is supposedly Core OS, thought to be the next iteration of Windows.

While a dual-screen/simplified/optimized Windows that’s flavored for different devices sounds extremely interesting, we’re curious to see how Microsoft navigates the conservative corporate and enthusiast crowds, some of whom want an easy-to-manage, staid OS rather than something fresh and new. Still, 2020 should be fascinating in this regard.

In March, 2018, Microsoft’s Joe Belfiore went on record claiming that Microsoft “expect[s] the majority of customers to enjoy” Windows 10 in S Mode in 2019. Say it ain’t so, Joe! Well, he never actually went on say that, but we all know that Windows 10 S did not take the world by storm—though we’ve noticed it on some low-cost laptops on Amazon and Best Buy.

Sure, Windows 1.11 was a promotion for the Netflix show, Stranger Things. But this interactive promotional app and its freaky glitches showcased the sort of dynamic, geeky creativity that endless, practical updates to Windows or Office or Azure subsume. It feels like a labor of love as much as an ad, and it’s definitely worth a few minutes to download and enjoy over your holiday break. Yeah, this is a WTF moment, but in a very good way.

WIN: Windows is getting smarter

We remain intrigued by the slow but inexorable rise of “smarter” applications through the use of AI. Though it can be a dangerously vague buzzword in some cases, “AI” has come to define what Microsoft is trying to accomplish within Windows and Office: apply intelligence to help simplify common tasks. Case in point: the search boxes Microsoft is applying to its apps, improving your writing through AI, and transforming Cortana into an assistive intelligence, rather than a personality.

There are downsides to this new trend: Cortana-powered devices like the Harman Kardan Invoke have been discontinued, and the Glas smart thermostat nixed Cortana support, too. But there was a big black mark against Microsoft, here, too: Contractors listening to actual Cortana and Skype requests.

Perhaps that’s a little unfair, but it goes to show the marketing challenge Microsoft has in front of it. I enjoy using Microsoft Edge, but I enjoy using other Chromium-based browsers, too, including Google Chrome, Opera, Brave, and Vivaldi. Microsoft has a potent team of developers behind the new Edge, but nothing about it sets the world on fire just yet.

It seems like just yesterday Microsoft agencies were writing pretend letters to government officials, “astroturfing” the need for Windows over Linux. So Microsoft’s ongoing love affair with Linux still amazes. From Microsoft’s lovely Terminal redesign to the Windows Subsystem for Linux 2, 2019 has surprisingly become the year of Linux. Even Microsoft Teams is getting into the act, as the first Office app designed specifically for Linux. Whoever saw this coming?

We think everyone wanted to like Microsoft’s Surface Pro X, and expected it to be something that it wasn’t: an always-on, always connected PC that we knew would have some issues with app compatibility and performance. But even Qualcomm executives were quietly seething about Microsoft’s selection of a smaller battery than in previous Qualcomm-powered devices. All in all, the Surface Pro X looks great, but it just didn’t have enough battery life to compensate for the poor performance. You can read our Surface Pro X review for a deeper dive.

Well, maybe a “WTH,” because there’s a lot on both sides of the equation here. On one hand, Microsoft’s Surface sales for the fourth calendar quarter of 2018 (reported in 2019) hit $1.86 billion, an all-time high. But they sank back down to about $1.3 billion for the next two quarters. In October, Microsoft’s third calendar quarter, Surface revenue actually declined 4 percent year over year.

So: a great quarter mixed with several average quarters, with a dip to raise the hackles. Congratulations, Microsoft, you’re a PC company.

Panos Panay’s “one more thing” reveal of the Microsoft Surface Neo dual-screen laptop (and thankfully, its keyboard) as well as the dual-screen Surface Duo phone was the highlight of the Surface launch. Microsoft has yet to tell us why we’ll want to buy either device, though, save for the current fascination with dual-screen devices that Microsoft hopes we’ll hold on to through holiday 2020.

As that date draws nigh, Microsoft will have to answer to business users and enthusiasts who’ll want to know if this is more than a folding, dual-screen Surface Pro X.

We’re consumers, first and foremost, so you’ll have to excuse the sour grapes that stain this entry. The first-generation HoloLens was a thing of wonder when we snagged the first, exclusive hands-on with the HoloLens as well as our later re-review. But then it vanished, while Microsoft mumbled about its potential in enterprise applications.

That same trend underwrote the development of the HoloLens 2, Microsoft’s second-gen AR device that you just knew would be handed off to corporate customers as soon as its was introduced. The HoloLens 2 may indeed prove to be a halo device for its enterprise ambitions, but it’s as good as dead to those who really care about it.

Okay, so the Microsoft Store may never be the equal of Steam. But bringing the Halo franchise to the PC in a rolling release was long overdue. Microsoft may still have a problem with developing the sort of unique, iconic, exclusive pieces of gaming IP that define the Sony PlayStation and the Nintendo Switch, so it’s decided that convenience is going to be its selling point. Bringing the all-you-can-eat gaming buffet that is Xbox Game Pass to the PC certainly helped endear Microsoft to the gaming community, especially those who already had a console.

Microsoft’s Project xCloud may deserve its own separate category, but we’re going to lump it in here. Cloud gaming on phones now, and PCs in 2020! Great! And who can forget about Minecraft Earth, which has caused my kids to complain about coming home from family walks.

To be honest, praising Microsoft’s vision of PC gaming is a somewhat myopic view, because xCloud implies gaming should live on all platforms—PCs, phones, and consoles. The “Project Scarlett” Xbox is due in 2020, too. Either way, godspeed.

Microsoft’s biggest success of 2019 was a joyful reminder that we all have dreams, even those of us stuck in a cubicle for the remainder of the year. Microsoft The Musical is a little hokey, a little humorous, with the feel of a high-school musical made by those who graduated…maybe not so long ago. And it’s not even an “official” Microsoft ad! Dozens of interns wrote, choreographed, directed, and produced this on their own time. (And boy, have they come a long way since 2005.)

Forget Bill Gates and Ballmer and the Jerry Seinfeld ads of old: This production stands out as the modern face of Microsoft, distinct from anything else the company might manufacture. It’s also one of the most wholesome moments in all of 2019, and not just Microsoft.

How could we not end on this big finish for Microsoft’s 2019? Stick with PCWorld as we cover Microsoft in 2020!