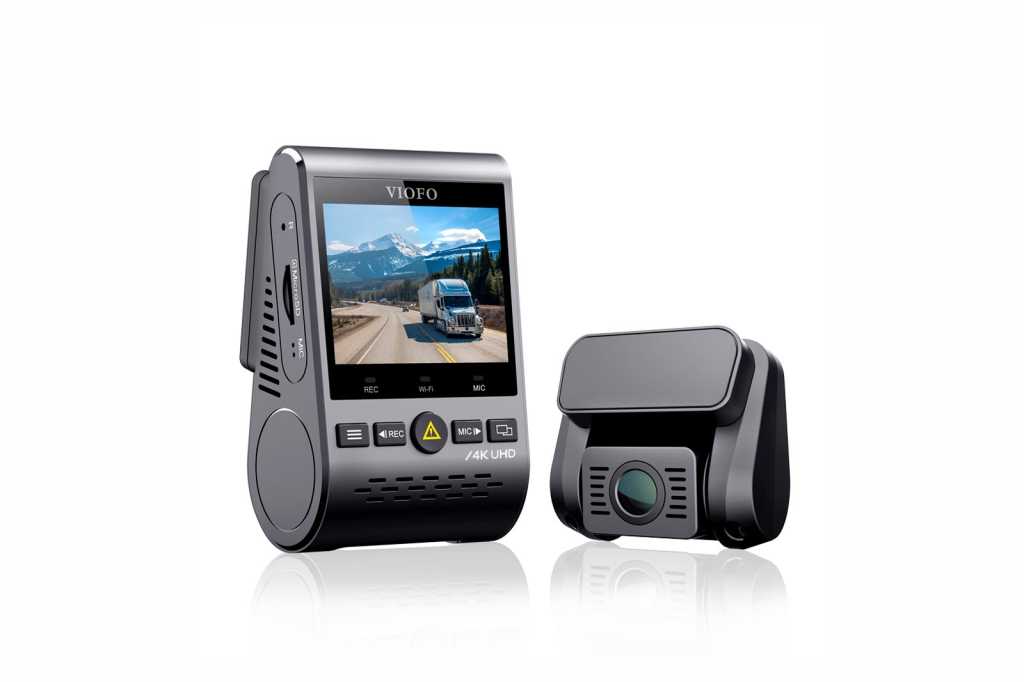 This if the first 4K UHD dash cam we’ve reviewed that delivers the extra detail you’d expect at that resolution. It also features Viofo’s keen sense of how to implement features and a rear 1080p camera. Captures are great, but four times the storage. Regardless, a very nice front/rear dash cam combo.

Viofo’s A129 Pro Duo must be performing some level of optical and video processing voodoo, because this front/rear dash cam combo ($250 on Amazon) captures are nearly perfect. As the 4K UHD upgrade from the Viofo A129 Duo (currently $169.90 on Amazon), the front video shows enough detail to make me think that the extra storage space 4K UHD requires (four times 1080p) might actually be worth it. The rear video is some of the best 1080p I’ve seen. Throw in integrated GPS, and this is quite likely the best pure front/rear dash cam combo we’ve tested yet. Compare to the Nextbase 422GW or its more price-competitive 322GW sibling, which offer largely the same feature set. The main A129 Pro camera is also available separately (currently $179.90 on Amazon)Remove non-product link.

The Viofo A129 Pro Duo consists of a 130-degree field of view (FOV) main 4K UHD camera using a Sony EXMOR IMX317 sensor, and a 140-degree FOV 1080p rear camera (Sony EXMOR IMX291) that connects via a long and somewhat thick cable. Both are adjustable only on the vertical plane, so careful alignment during install is necessary for the best results.

Which brings me to my only real, and minor issue with the A129 Pro Duo: The cameras don’t detach from their semi-permanent sticky mounts. This is fine for the majority of users, but it’s a no-no in a convertible such as mine. Slash, grab, and your top is ruined and the dash cams are gone.

The main unit has a two-inch color display with five navigation buttons underneath, including one to take emergency video. The buttons are labeled, and the menu is nicely organized and easy to navigate. On the right side of the main unit are the A/V output, USB power connector, and the rear camera connector. On the left side are the microphone, reset button and the SD card slot.

The stated operating temperature range for the A120 Pro Duo is from +14 degrees to +140 degrees Fahrenheit. A capacitor will power the unit for approximately 5 seconds after removal of 12-volt. Being paranoid, I’d prefer 10 to 15 seconds, but 5 will likely cover the most important post-impact action.

There’s GPS on board, and unlike some other dash cams I’ve seen recently, it will set the date and time automatically. Current date and time are a feature of GPS, and I’m not sure why some vendors don’t take advantage of that.

I’ve been pretty iffy on the whole 4K UHD dash cam concept, largely because 2160p video requires almost 1GB of storage for every three minutes of video. That’s four times the requirement for 1080p. You can blow through a 32GB SD card in less than two hours at that rate, and under constant use you’ll wear out said SD card quicker as well. Not only that, but my first looks at 2160p video from other dash cams revealed only a slight uptick in detail for that 400-percent increase in storage requirements.

Then I saw the A129 Pro Duo’s front captures, and I’ve had a rethink. Its captures show a large increase in detail without use of a sharpening filter. Check out the license plate in the first capture, and you’ll see what I mean. I’m still thinking most users would be better off with 1080p for everyday use, but for pros that want to capture fine detail, this camera is the real deal and 4K UHD probably worth the extra expense.

As you can see above and below, day captures from both the front and rear cameras are top-notch. Notice the detail in the license plates.

Night captures were also good, if not nearly as nice as the day captures. There was a marked tendency for flare to block out detail, as you can see in the front camera capture below. The license plate was easily readable with the naked eye.

With the headlights off, more detail was captured, although it’s still not up to the standards of the day video. Alas, running with your headlights off isn’t part of the recipe for safe driving, or legal.

The rear night capture appears better, but the flare is still evident in the street light, which wasn’t nearly as bright as it appears. This is apparently the price you pay for capturing so much detail in the darker areas, and a trait of the Sony EXMOR sensors.

Despite the flare issues, the A129 Pro Duo’s night captures are generally quite good, especially for surveillance using the camera’s wake-on-motion parking mode. Parking mode requires hard-wiring, or use of an OBD-II power source.

Should you buy the Viofo A129 Pro Duo?

The Viofo A129 Pro Duo is a 4K dash cam that’s easy to recommend. You simply won’t get more detailed daytime video captures from a front/rear dash cam combo. Add integrated GPS, nice attention to the overall user experience, acceptable run time off of the 12-volt, and it’s the full package.