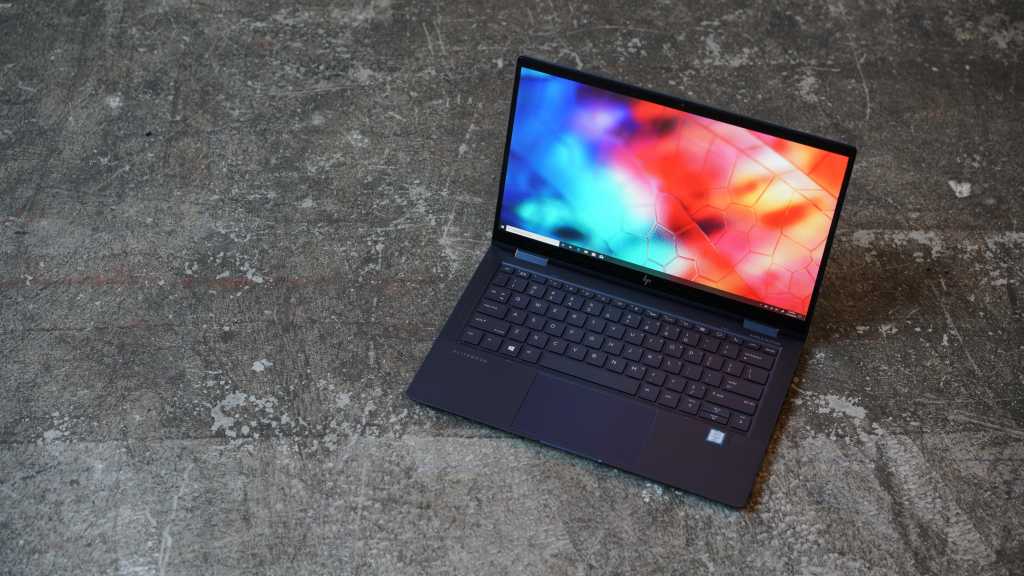 The HP Elite Dragonfly is a corporate laptop offering a solid configuration with some premium options; good performance, amazing battery life; and a truly classy design. It’s made for your boss, but whether it’s deserved is another matter entirely.

The HP Elite Dragonfly is a corporate laptop made to please your manager—and isn’t that the best way to get ahead in the working world? With a fingerprint-resistant finish, a beautiful cerulean magnesium body, and shoulder-friendly weight, the Elite Dragonfly is sure to earn you permission to leave 15 minutes early on Friday (thanks, boss!).

Just remember, the Elite Dragonfly is designed for the boardroom, not the racetrack, so don’t expect blazing speed. What you will get is a solid configuration with some premium options; good performance, amazing battery life; and let’s not forget the truly classy design. Hmmm, maybe this laptop is too good for your boss?

The Elite Dragonfly’s main claim to fame is its weight, which approaches 2.2 pounds when equipped with the base 38-watt-hour battery. The trade-off is that paltry battery capacity. HP also offers a 55-watt-hour battery for additional cost. Personally, we’d opt for the larger battery (supplied in our review unit), which increases the weight by just 3 ounces to 2.5 pounds.

Because your boss is likely to be butter-fingered, the Elite Dragonfly also has a better chance of hitting the floor—and maybe surviving—as HP said it passes nine MIL-STD drop tests in drop, shock, and vibration.

What’s inside still matters, though, and like most corporate premium laptops, the Elite Dragonfly features the top-end, 8th-gen Intel Core i7-8665U. You can view the full details of the Core i7-8665U on Intel’s ARK database, but in performance you get about 200MHz higher clocks in Turbo Boost and 100MHz higher base clocks on paper. Most important is actually the support for Intel’s vPro feature, which enables easier management of the laptop in a fleet environment, where 200 or 2,000 have to be accounted for.

The Core i7-8665U also supports Intel’s TSX-NI and Stable Platform features. Even though the latter promises better performance for multi-threaded apps, it’s supported on very few CPUs despite being introduced four generations ago with the Haswell line.

The Elite Dragonfly embraces its executive-laptop status, delivering a feature list that’s first-class all the way. Here are the details:

Display: HP offers three screen options for the Dragonfly: A 4K UHD OLED screen that hits 500 nits; a blazing 850-nit Sure View Gen 3 FHD screen that lets you switch on a privacy mode so those to your right and left can’t read the screen; and a power-sipping 1 watt FHD screen, which was configured in our review model.

Storage: Our review sample included 512GB capacity Intel H10 Optane Memory hybrid drive. You can read our review of the H10 for the full details on the drive, but we’re generally fans of it.

You won’t have to worry about your boss barging into your cubicle to steal—borrow—another dongle. The Elite Dragonfly features two Thunderbolt 3 ports, an analog combo jack, a wedge-style lock port, and a USB Type A port. The Elite Dragonfly also somehow manages to pack a full HDMI port into its svelte body. We wish the Thunderbolt ports weren’t both on the right side, however, as they could impede mouse usage.

The input devices are top-notch, starting with a full-travel dome keyboard. There are two levels of backlighting (plus, no lighting at all). Keys are generally well placed, but HP does combine many key functions, such as pressing the function key and the right shift button to access the print screen. HP’s reason for not having a dedicated print screen button is so it can have dedicated keys to access the calendar as well as several IP-based video conferencing apps.

One feature we do like is the the dedicated mic mute button. It lights up, so no one can say they didn’t know they weren’t on mute when they bad-mouth the CEO during a videoconference.

Speaking of privacy, HP has also cleverly integrated a physical shutter over the camera. Unfortunately it also blocks the infrared camera, so you can’t use the Windows Hello facial recognition when the shutter’s active. Luckily there’s a fingerprint reader as an alternate authentication method.

The Synaptics trackpad is glass and fairly smooth. The trackpad is compliant with Microsoft’s Precision touchpad requirement, which is an indication of its accuracy.

Here’s another fairly unique features on the Elite Dragonfly: an oleophobic coating to help it repel fingerprints and other greasy marks. We tested it against our typical snack fare, and and found it effectively repelled most smudges from fingers that had recently handled corn chips and nacho tortilla chips. However, it was no match for the gold standard of potato chips, which caused our fingers to leave a snail-like trail on the palm rest. The oleophobic coating helps, but don’t expect it to work miracles.

As a corporate laptop, the Elite Dragonfly is hardened against attacks, including those to the BIOS. HP says it can both detect scary UEFI-targeting root kits and recover from them. The Dragonfly also integrates Bromium’s security technology in its Sure Click feature. It basically takes the sandboxing approach of many browsers, but enforces it in hardware.

With its hardware-based security, the Elite Dragonfly lets you set up the laptop with measures ranging from prudent to Draconian. As with all security procedures, the levels of pain are up to the administrator.

Keep reading to learn about performance and than insanely long battery life.

The Elite Dragonfly’s performance reflects the priorities of corporate laptops, which put security and reliability over raw speed. You can see that odd dynamic right here: The 8th-gen Core i7-8665U in the Elite Dragonfly has a higher clock speed than the common consumer Core i7-8565U CPU. But one look below and you won’t see it.

When we task Cinebench with using a single CPU core, the situation doesn’t change much: The Dragonfly is still a little slower than most other laptops. The good news is that in single-threaded tasks—which is the bulk of what’s done on small, thin laptops—it’s not a big deal at all.

Our harshest test of a CPU uses the free HandBrake utility to encode a 30GB 1080p file. The task typically takes an hour on thin-and-light laptops, and it stresses the cooling capabilities of any laptop. We again see the Elite Dragonfly underperform other laptops.

If you’re starting to wonder just why the CPU has a higher boost clock on paper, but is actually slower, the reason is that it’s a business laptop. Yes, we know, you’re wondering why not just buy a slower CPU? The problem is your boss still wants the best.

That’s not to say the Core i7-8665U is actually slower than a consumer Core i7-8565U—it’s just that to make it that fast, HP would have to add in, say, two fans instead of one, and beefier heat pipes. That adds weight, increases fan noise, and removes space for, say, more battery capacity.

The truth is, none of this matters in a corporate environment. The next test is PCMark 8 using various simulated Corporate Drone tasks of word processing, browsing, video conferencing and spreadsheeting.

As you can see, that back-of-the-pack performance of the Elite Dragonfly suddenly looks pretty good. The truth is the Elite Dragonfly is just fine for what 95 percent of Corporate Drone work requires. Just remember to tell your boss, “it’s 200MHz faster!”

Our last pure performance test uses 3DMark to measure the graphics capabilities of the Elite Dragonfly. No surprise, it’s basically no better and no worse than most laptops using Intel UHD or HD graphics. We’d recommend that any gaming or graphics be kept to the bare minimum. If your boss’s idea of “gaming” means solitaire or Flash-based games, you’ll be OK.

Perhaps the most important test for a laptop this portable is battery life. To test that, we loop a 4K video using Microsoft’s Movies & TV app. We set the display at a relatively bright 250 to 260 nits, switch off Wi-Fi, and connect a pair of earbuds for sound.

With its “1 watt panel” and large battery, it’s no surprise the Elite Dragonfly knocks it out of the park in battery life. And yes, that’s about 18 hours of video playback.

Remember: Video playback is mostly on cruise control today. Fire up Office and sit in a spreadsheet all day scrolling around, and you’ll likely whack off a third of the run time. Fire up Chrome and fill it with 25 tabs, all looping and downloading continual Flash-based ads, and you can probably expect to cut the run time in half, which is still about nine hours. Fire up any application that grinds on the CPU or GPU for the whole time, and you probably shouldn’t expect more than two to three hours at best.

We’ll admit, we’re impressed by the HP Elite Dragonfly. It transcends our expectations for corporate laptops. Instead of boring, black, and basic, the Elite Dragonfly is beautiful, impressively light, and surprisingly well-equipped.

For consumers looking for a little more rated durability and versatility in a laptop, the Dragonfly is worth a hard look—if you can stomach the price. As a corporate laptop with manageability features such as vPro and the “faster” Core i7-8665U CPU, it’ll set you back $2,000 to $2,200. And that’s without the optional $76 HP Active Tilt Pen. You could skip the pricier corporate features and still get a lot of laptop.