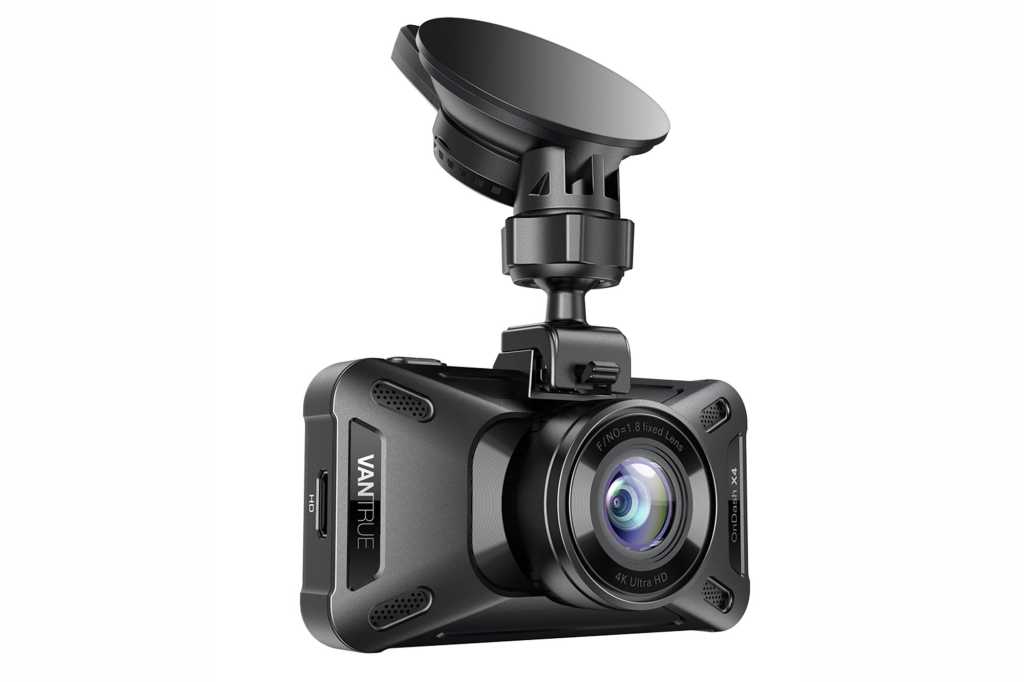 The Vantrue X4’s 4K UHD captures are great, but this camera is pricey, and the capacitor won’t allow captures if the 12-volt is disrupted. The optional GPS mount is a must-have addition.

The VanTrue X4 is one of the first 4K UHD dash cams available, but you should definitely expect more to follow–it’s the thing with vendors right now. This bleeding-edge model shows some of the challenges of said high-res trend: It’s a bit pricey and while there’s a noticeable increase in detail in its 2160p captures, it might not be worth the four-fold increase in storage requirements. Beyond that, Vantrue still does a whole lot right.

The Vantrue X4 ($200 on Amazon) has the shape and form of the classic dash cam, looking like a super-compact happy-snap camera from a decade or so ago. The X4 offers a 160-degree field-of-view (FOV) lens and a new 4K UHD Sony IMX317 sensor. Its feature set isn’t really complete without the optional GPS mount ($22 on AmazonRemove non-product link), so we encourage you to add that to your shopping cart.

There’s a mini USB port on top of the camera itself, opposite (on the same plane) the power button, however, there’s a second mini USB connector on the suction mount that’s closer to the windshield and doesn’t need to be disconnected every time you remove the camera. It’s the same deal on the GPS mount, but in that case you must use the mount’s USB port if you want to power both the camera and GPS.

There are four navigation buttons to the right of the three-inch display (up/down/menu/OK) to surf the menus, turn the camera on and off, etc. The menu system is laid out logically, divided by system setup, record setup, and file viewing functions. You must press okay to stop recording before you can access said menu system. There’s probably a technical reason for this, as I’ve seen the same requirement on some other dash cams I’ve reviewed. It would be nice to be able to change settings on the fly while you’re still recording.

The SDHC slot is on the left side and a mini HDMI port is on the right that allows you to output your videos directly to a TV. The bottom is given over to venting, which exits on the front of the camera. A slightly unusual thermal solution, but it allowed the X4 to remain cool during use.

The Vantrue X4 takes very good video during daylight hours, however, night video is merely what I’d rate as good. No matter what the quality, 4K UHD (2160p) video takes up roughly four times the storage as 1080p—or about 1GB for every three minutes.

You can judge for yourself the quality of the day captures in the image below. The color is nicely saturated despite the gray day, but compression cuts down on the detail to the point where it’s not immensely better than with 1080p. (Note that the nine zeroes you see next to the date are the placeholder for your license plate number.)

The X4 4K UHD’s extra resolution seems to offer less of an advantage in low-light situations.

Meteorlogical conditions in the next capture were less damp, and you can see a bit more detail. I did not have the GPS mount at the time I captured this video, but I did subsequently test the mount, and the GPS coordinates will show up directly under the date and time.

To reiterate, the 2160p captures are better than 1080p captures, but just a nice uptick. Practically speaking, you’re likely not gaining anything of major legal significance for four times the storage with the X4.

The X4 runs nearly cool to the touch, and is rated for operation from -4 to +158 degrees Fahrenheit. I found the default setting of the G-Sensor too sensitive for my stiffly sprung Mazda Miata, and knocked it down a notch, but that was the only thing I’d call an operational hiccup.

My biggest complaint is the supercapacitor, which lasts long enough to save the current files, but won’t capture if 12-volt is interrupted during an accident. The display actually stayed lit for about four seconds when I pulled power, but recording stopped immediately. So call the Vantrue X4 great for capturing pedestrian fraud, not so much if you get clobbered by a truck.

Should you buy the Vantrue X4?

The Vantrue X4 will probably get a lot of attention just for being one of the first 4K dash cams. It’s undeniably refined and easy to use, and it takes it great video—the best I’ve seen during the day. But that quality might not justify the premium you’re paying for 4K UHD video—let alone the extra you’ll pay for storage space. For the price, too, we’d have like to see a longer-lasting capacitor. With even slightly longer run time off of the 12-volt, I would’ve rated it a half-star higher.