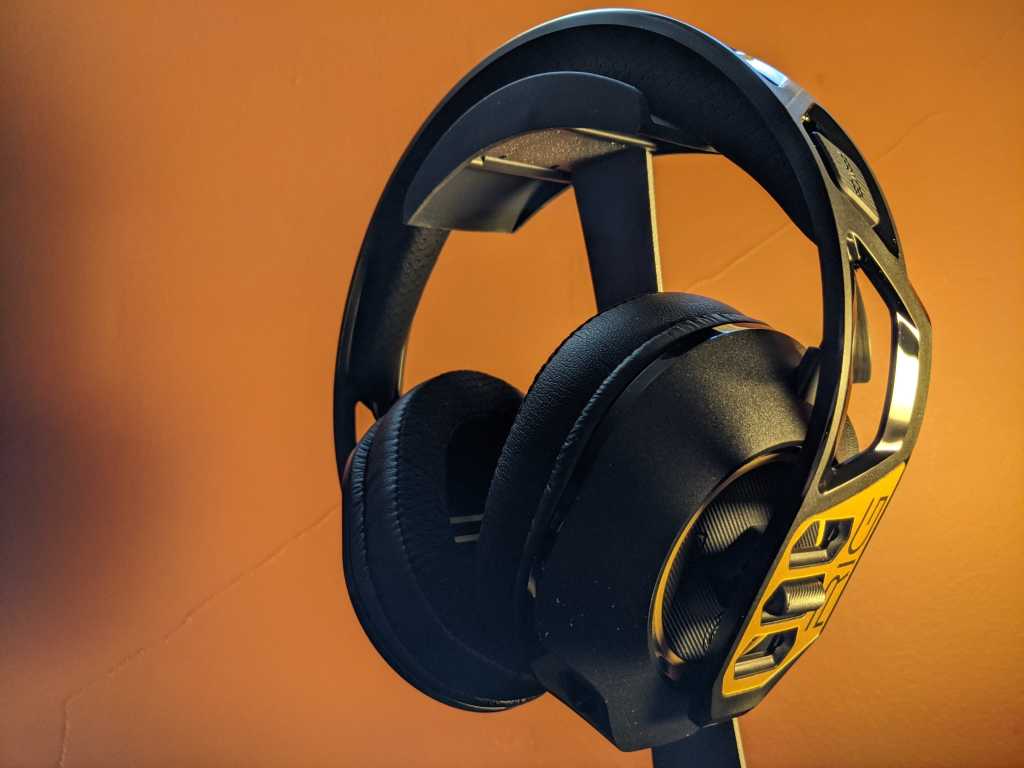 The Plantronics RIG 700 is a better headset than its predecessor, a solid low-cost entry for wireless, but disappointing battery life undermines the improvements to build quality and audio.

“Plantronics” is no more—at least in theory. Having acquired Polycom in 2018, Plantronics took the opportunity a few months back to ditch its old name and rebrand as “Poly.” Why’d they change it? I can’t say. I guess someone liked it better that way.

But, uh…apparently the folks who designed this headset’s packaging didn’t get the memo: The box touts this as the Plantronics RIG 700HD, a follow-up (sort of) to the RIG 800LX we reviewed a few years ago. Slightly more durable, slightly cheaper, and I’d say, slightly better.

Branding change or not, the RIG line continues to feel like it’s been kit-bashed together out of spare parts.

The sizing system is the culprit, I think. The earcups don’t simply slide up and down the headband like you’d expect. Instead, there are three holes machined into each side of the headband. You have to pop the earcups out, conscious the whole time that they’re held together in this in-between state by a single fragile wire, and then carefully punch them back into a new slot to make adjustments.

It’s wild. Reviewing the RIG 800LX, I said it had “one of the strangest sizing systems I’ve ever seen.” That’s underselling it though. I was baffled the first time I saw it, and I’m even more baffled that Plantronics has stuck with it for so long. It feels like a prototype, held together by 3D-printed plastic and prayers.

That said, it’s a very lightweight “prototype.” If I had to guess, that’s why Plantronics developed this system in the first place. It eliminates the weight of a metal headband and reinforced hinges, resulting in a RIG 700HD that weighs a mere 8.5 ounces. Battery, transmitter, all of it just a hair over half a pound. Miraculous is what we call that. It’s even lighter than the RIG 800LX, already one of the lightest headsets I’d ever held—though that comes at a cost, as we’ll get into later.

And Plantronics has refined its ad-hoc aesthetic somewhat over the years. The RIG 700HD still looks rough around the edges, but improves on the old 800LX by abandoning the floating headband style for a more traditional padded band. The difference in comfort is minimal given the RIG 700HD’s light weight, and it results in a sleeker silhouette overall.

Plantronics also scaled back on texture this time, abandoning the ribbed plastic of the 800LX for smooth piano black planes and curves. It’s easier to find the built-in controls as a result, though the back of the left ear is still very crowded: volume wheel, another wheel for mixing the game and chat levels, a power button, a MicroUSB charging port, and a mute button, all on one ear.

The chatmix wheel is a particularly welcome feature on a $130 headset. Not so long ago, those were reserved for the best of the best. Nowadays it’s a more common feature, seen on Turtle Beach’s $150 Elite Atlas Aero among others, but it’s still a premium touch on the decidedly budget-friendly RIG 700HD. I only wish it were easier to tell which was the volume wheel and which was chatmix without taking the headset off. Having one wheel per ear would be a lot more intuitive.

But overall, it’s a decent redesign for Plantronics. Don’t get me wrong, the RIG 700HD doesn’t look good—but better, for sure. A strong logo, a splash of brushed bronze on the ears, these are a marked improvement to the RIG line. I still wish Plantronics would choose a new design language, but maybe that’s for “Poly” to sort out.

Onto the sound, which is where I had the most trouble with the RIG 800LX. To quote our previous review:

…The RIG 800LX’s bass presence is busted though, as is the top of the treble range. The drivers literally can’t keep up.

Thus heading into the RIG 700HD, those were the aspects I was most keen to test. And I’ll say this: Complicated mixes with a lot of overlapping sounds are still a problem for Plantronics. The RIG 700HD hasn’t fully fixed the issue, and songs like “Feel Alive,” which I used to test the RIG 800LX, still sound a bit thin through the RIG 700HD.

That said, the rattling and distortion that I noticed last time has been fixed, at least. It’s still not the most vibrant headset, but there’s more bass presence in the RIG 700HD and without all the nasty mechanical problems of its predecessor.

And simpler mixes still shine on the RIG 700HD. Stripped-down songs, like piano-and-voice tracks, come through great thanks to the RIG line’s warm mid-range and open sound. The latter was one of my favorite aspects of the RIG 800LX, which featured a width to the stereo mix that rivaled HyperX’s best efforts. Plantronics has duplicated it for the RIG 700HD.

Now, for the RIG 700HD’s faults. First off, the Dolby Atmos support in the RIG 800LX has been stripped out for the RIG 700HD. Instead there is Windows Sonic surround, presumably because the license is cheaper. You still get a spatial surround sound solution, but in my testing, Sonic isn’t as natural-sounding as Atmos. Your opinion may vary, as this is one of those hot-button topics audio people like to debate, but I wish Plantronics had sprung for the Atmos license.

The RIG 700HD also uses a removable microphone, replacing the flip-to-mute design found on the RIG 800LX. This is a bit of a lateral move, but the RIG 700HD and its dongle are too bulky to be used anywhere except at a desk, thus negating any need for a removable microphone. You’re not wearing these out and about, and muting the microphone is more of a pain this time because the button’s so small. Awkward too, with the way it’s placed on the bottom of the left ear. Pressing it causes the whole headset to shift since the RIG 700HD is so lightweight.

Worst of all, Plantronics has implemented sidetone (the ability to hear your own voice through the mic) in a way that doesn’t automatically disable when you leave the microphone unplugged. I spent hours thinking the RIG 700HD had a constant background hiss, only to realize it was feedback from the empty 3.5mm mic port. Tapping the mute button fixed the problem, but it’s bizarre Plantronics didn’t set the RIG 700HD to do that automatically whenever the mic is unplugged.

Lastly, battery life. I mentioned earlier that the RIG 700HD’s lower weight came with a price, and the price is about half the battery capacity. The RIG 800LX was designed to last 24 hours per charge, respectable but not very remarkable. The RIG 700HD is designed for 12 hours, which is…not great. I can go through 12 hours in a single day, albeit a long one. Most people won’t, but it still means remembering to charge the RIG 700HD every night or two.

These days, I feel like 20 hours is the bare minimum I’m looking for in a wireless headset unless there’s a creative charging solution, e.g., the Astro A50’s uniquely convenient charging stand. Even then, the closer a headset comes to the Sennheiser 370’s magic 100-hour runtime, the better. The RIG 700HD falls far short.

It’s not quite one step forward, two steps back. I still think the RIG 700HD is a better headset than the RIG 800LX. Both the audio and build quality have been improved in ways big and small.

This is an incremental upgrade though, not the leap needed for the RIG to vie head-to-head with Logitech, HyperX, or even Turtle Beach. Reviewing the RIG 800LX, I wrote, “The $150 price tier is a bloodbath these days…and competition is fierce.” Two years later that’s truer than ever, and Plantronics just can’t seem to catch up. I’m not disappointed with the RIG 700HD per se, but it’s hard to recommend when $20 or $30 more can get you a headset that’s better-built, better-sounding, or both.