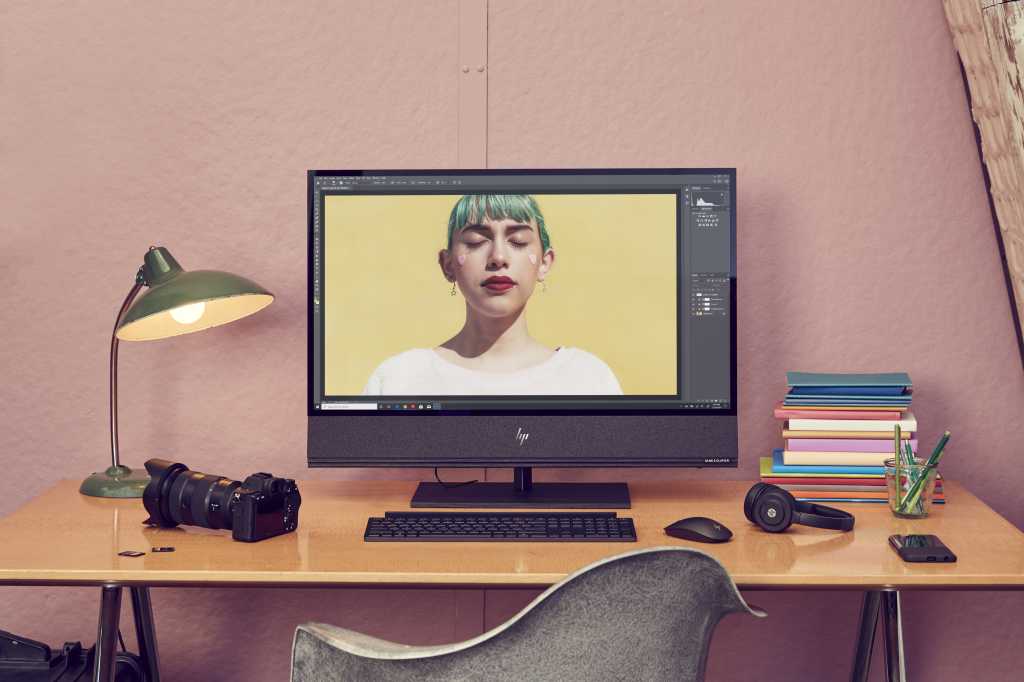 HP’s Envy 32 AiO claims the title of being the first with an HDR600 4K display, the first with Geforce RTX graphics, and for those who want the noise: the world’s loudest speakers on an AiO, too. Announced Sunday at CES in Las Vegas, it’s also arguably the first all-in-one PC that’s bad-ass instead of boring. You can configure the Envy 32Remove non-product link right now on HP.com.

Calling it a “personal creative studio,” HP says the all-in-one PC is the first to feature a 32-inch 4K UHD screen that can hit HDR600 requirements. HP says the panel offers a 6000:1 contrast ratio, 600 nits of brightness, and 98 percent of the DCI-P3 color space.

HP opted not to offer touch support on the screen. Officials said their research indicates touch is preferred on laptops, but many consumers don’t care for it on desktops.

This RTX GPU is not for gaming

The second “first” is HP’s use of Nvidia’s GeForce RTX graphics, with options from RTX 2060 to RTX 2080. Despite this GPU firepower, the company said the Envy 32 AiO not a gaming-focused PC. Instead, it caters to creative types who need access to the state-of-the-art RTX GPUs, which feature Nvidia’s newest encoding cores and hardware support for ray tracing. The Envy 32 AiO is actually part of Nvidia’s RTX Studio program, which helps PC vendors develop hardware optimized for the company’s highest-end graphics technology.

Given that HP reaches for the stars in graphics, the company’s choice of CPU is interesting. You’d think HP would use the top-end, 95-watt 9th-gen Core i9 “K” parts introduced in late 2018 and actually positioned for creators. Instead, HP took CPUs from the second round of 9th-gen Core desktop chips announced last April, mostly 65-watt parts, and most without Hyper-Threading (including the ones used by the Envy 32 AiO).

HP hasn’t said why one was chosen over the other. For most creative uses, however, an 8-core is usually plenty even if it lacks Hyper-Threading. While an AMD Ryzen 7 3000-series of CPUs would be a nice option, HP’s Envy 32 AiO was likely too far along when AMD introduced the CPUs last summer.

All-in-One PCs usually have inadequate to average audio. HP reverses the trend by basically tucking a soundbar into the chin of the Envy 32 AiO. In person, the Envy 32 AiO can fill a typical home office with significant volume. HP said it actually measured the the noise other All-in-One’s could make, and the Envy 32 AiO prevailed.

Sure, you’ll say “loud” doesn’t mean good. The Envy 32 AiO’s soundbar aims to create fuller sound by including one woofer and two passive radiators, two medium drivers, and two tweeters. Given that the speakers and even the acoustic material are tuned by audio experts Bang & Olufsen, there’s some reassurance for quality as well as quantity.

HP didn’t list out higher-end specs for the Envy 32, but those with GeForce RTX 2080 and 32GB of RAM will obviously cost more.