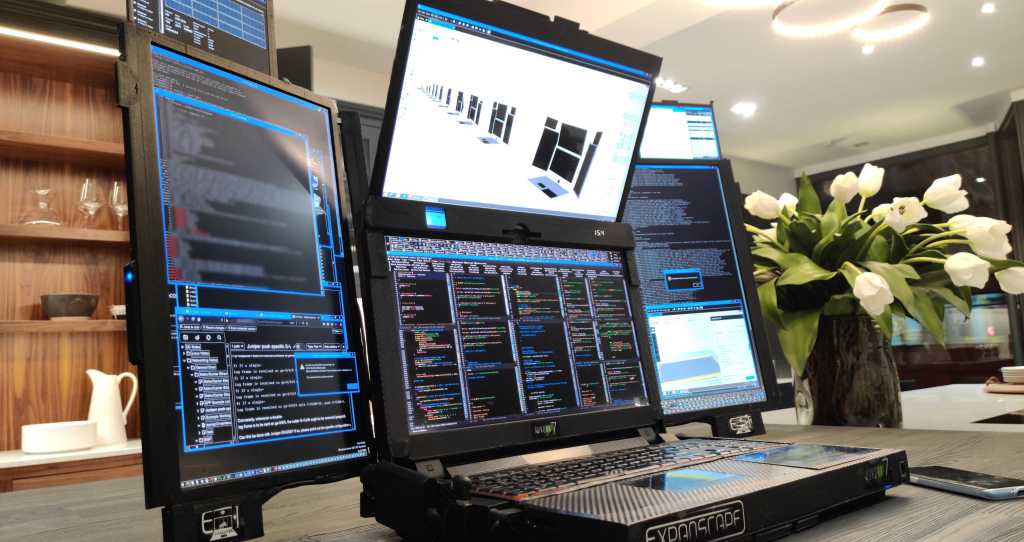 We’re just going to say it: Somebody should’ve booked a flight to Las Vegas to show off the Expanscape Aurora 7 seven-screen laptop at CES.

I mean, seriously. CES, the home of litter boxes that use AI to analyze your cat’s stool? Plant-based pork products? Ivanka Trump? A seven-screen laptop would fit right in at this celebration of the far-out and fantastical.

Sure, Expanscape says the Aurora 7 is an engineering prototype. But that’s what CES is—a place to show off absolutely bonkers innovations that no one’s particularly asked for, just in the hope of getting some attention and (maybe) funding. Expanscape says its even selling these prototypes!

“Expanscape will be manufacturing and selling our prototypes even before they are finalized as we recognize there is an immediate demand for these items in the DevOps, SecOps and CyberSecurity communities,” the company says. Now that’s what we’re talking about.

Let’s look at the specs: There’s a Core i9-9900K inside what the company calls a “heavily modified / customized ODM laptop” that’s in the pictures.  And there’s reportedly an Nvidia GTX in there, too. A formal price and spec sheet is due later this week, according to Expanscape.

But the real meat is in the displays, all seven of them: four 17.3-inch 4K panels, plus three 1920×1200 displays, “as well as an additional mini display that displays system status info and user configurable content.” Yep, yep, yep, this is clearly CES-worthy.

Are we dissuaded by the fact that the website doesn’t list an actual address or phone number, and that both are “coming soon”? Or that the email that we sent to the company’s email address asking for more details and a price bounced? Of course not. This is exactly the sort of thing we’d expect from one of the many CES product exhibitions that dot the convention landscape in Las Vegas. (Well, just the fringe-iest ones, anyway.)

So if there’s a real computer behind this prototype (and yes, we’re skeptical) it’s a crying shame we didn’t get to drool over it at CES. Maybe next year with, say, 12 displays?