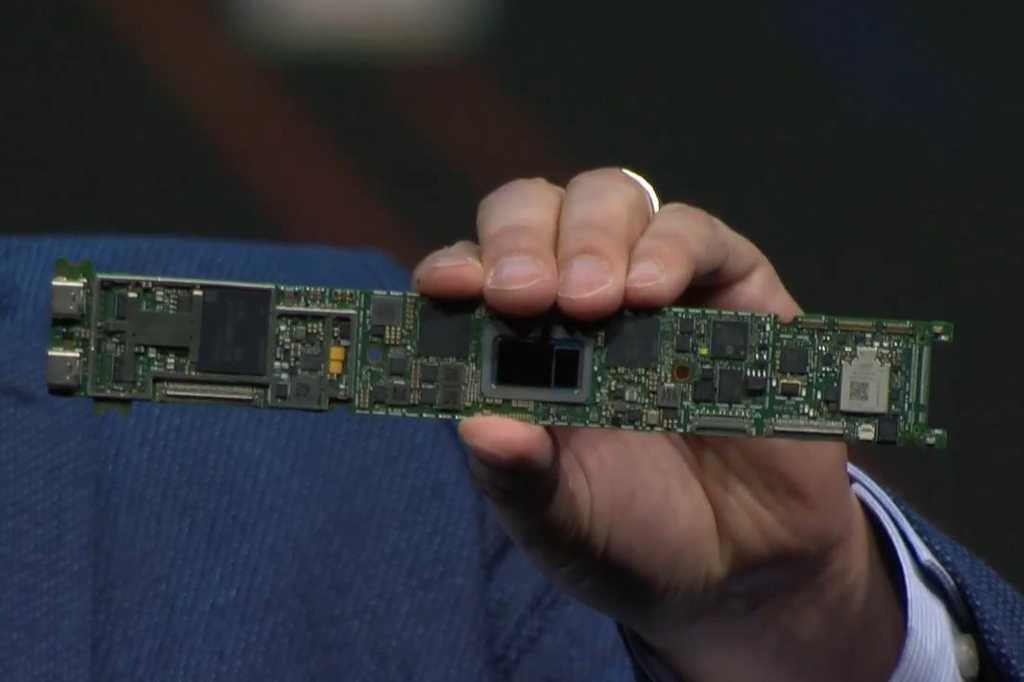 Intel used CES in Las Vegas to offer a further glimpse, though little detail, of its next-generation chips due in 2020: Tiger Lake, its next CPU, and proof that its next GPU, code-named DG1, is up and running.

Before its press conference Monday even began, Intel had already made several announcements, some arguably more interesting: its new Core i9-based modular NUC, “Ghost Canyon,” plus new details concerning its 10th-gen Comet Lake chips, including the fact that they’ll run above 5GHz. Intel also revealed earlier that its upcoming Tiger Lake CPUs will have improved AI performance, though the company didn’t say how much.

Intel is—or should be—worried about AMD’s barrage of CES announcements, including the Ryzen 4000 7nm/Zen 2 mobile chips expected to take on Intel, and the ridiculously powerful 64-core 3rd-gen Ryzen Threadripper 3990WX.

The press conference began with segments on Intel’s enterprise businesses, which we’ve summarized at the end of this story. Finally it was time for some consumer PC news.

Greg Bryant, executive vice president of its Client Computing Group, came onstage to update the audience on Project Athena, the thin-and-light specification that Intel helped develop. In less than a year, Intel has verified 25 Project Athena devices, Bryant said. In 2020, that number will be doubled to more than 50, Bryant continued—including a new dual-screen specification.

Lenovo’s Christian Teismann, senior vice president for the commerical business at Lenovo, came onstage to show off the ThinkPad X1 Fold, a dual-screen PC that can be a 13.3-inch display or tablet, or a small laptop. Intel followed that with a demo of the Dell Concept Duet, a larger dual-screen laptop prototype.

Intel’s Chris Walker made a surprise entrance with another concept: “Horseshoe Bend,” a full 17-inch foldable PC. Like the Lenovo ThinkPad X1 Fold, Horseshoe Bend can be a single-screen display or tablet, or a dual-screen device, and it’s a lot bigger than Lenovo’s offering.

Bryant also pledged 5G support for PCs, with a partnership with Mediatek, with samples available in the third quarter of 2020. Originally, Intel had claimed that the partnership wouldn’t yield fruit until 2021.

Bryant then switched gears to the silicon inside the devices themselves, with an emphasis on AI. Adobe’s Jason Levine appeared briefly and entertainingly to show the ability to pull out objects from the background within Adobe Photoshop or Adobe’s Sensei app, a feature that Intel emphasized within Ice Lake and other 10th-gen chips.

Intel’s 10th-gen parts have been split between Comet Lake and Ice Lake, but the next code word to pay attention to is Tiger Lake. That chip, reportedly a 10nm offering, popped up on roadmaps in mid-2019, and is “coming soon” to laptops, according to a promotional video Intel played.

It’s not clear what performance advantages Tiger Lake will offer, and over which chips. Bryant appeared to claim that Tiger Lake would offer a “double-digit” performance increase over the prior generation. Lisa Pearce, vice president of Intel architecture, graphics and software, who joined Bryant onstage, claimed there would be a “huge leap” in graphics performance, presumably due to the inclusion of Xe graphics cores.

Intel closed out its CES presentation with a “proof of life” demo of the Xe core, showing it running part of the presentation as well as playing Destiny 2. The first implementation, which may be just a prototype, is known as DG1. Intel executives offer no actualy details, but an Intel representative did show the chip to media for photography.

It’s not known when Intel expects Tiger Lake and Xe to arrive. By the end of 2020, however, we should expect to see both chips on the horizon.

Other news from the press conference

Most of the press conference focused on other areas of Intel’s business. The theme was “Innovation through Intelligence,” representing the addition of AI from the edge to the cloud. Intel chief executive Bob Swan walked through a series of announcements focusing on the enterprise.

The message? Data, and the need to process it. In 2019, there were 38 billion devices connected to the network, expected to increase to 56 billion devices by 2025, Swan said. Roughly 75 percent of those devices will fall into the IoT category, he said. About 7 devices will be owned by one individual, collectively generating 175 zettabytes of data in 2025. Of that, half of the data will be generated by devices at the edge—wearables, cash registers, connected cars, and the like.

Three emerging technologies are key to managing that data, Swan said: 5G-speed networks, artificial intelligence, and the intelligent edge (or intelligent devices at the edge). “How do we embed intelligence into everything we make to enrich the opportunities for consumers and our partners?” Swan asked rhetorically.

Intel’s acquisitions in recent years of Movidius, MobilEye, Nervana, and more represent the company’s desire to address those needs. Swan showed off examples of several in-house Intel technologies from those subsidiaries that, for example, helped the Red Cross create better mapping data for areas it was serving.

Navin Shenoy, Data Platforms Group executive vice president, brought out Anne Aaron, director of encoding technologies for Netflix, to explain how the royalty AV-1 codec, which the company will deploy this year, offers 60 percent more data savings versus the previous technology. Intel’s SVT-AV1 codec, the next generation, will be deployed at Netflix and other companies in 2020.

Unfortunately, just a fraction of that data, about 5 percent, is processed by artificial intelligence, Swan said. One way Intel hopes to overcome that is through the Intel Neural Network Processor for Inference, announced last year at CES. Shenoy said that the NNPI is delivering up to 1.6X improvement on natural language workloads and 3.7X on system level performance, within a 75W envelope.

Intel also said that an athlete-tracking technology will be deployed at the 2020 Olympic Games, powered by its 2nd-gen Xeon Scalable chips—the fastest growing Xeon part in its history. In sports training, a similar technology is used to analyze how athletes use the various parts of their body during workouts.

Similarly, James Carwana, vice president and general manager of Intel sports, showed off the progress with Intel’s volumetric video, which captures a three-dimensional image of sports action using cameras trained on the playing field from all around the stadium. In 2017, the company could capture a volumetric “frame” that could be manipulated as an object in 30 seconds. The company spent two years working on improving the processing speed, and in 2019, Intel’s Xeon helped spur a massive increase in performance to 30 frames per second, Carwana explained.

“We figured out the speed portion of the puzzle, and now have to figure the quality part,” Carwana said. That requires 67GB per second of data right now, and will need more in the future. The next goal is six times more computing power to improve the resolution even further.