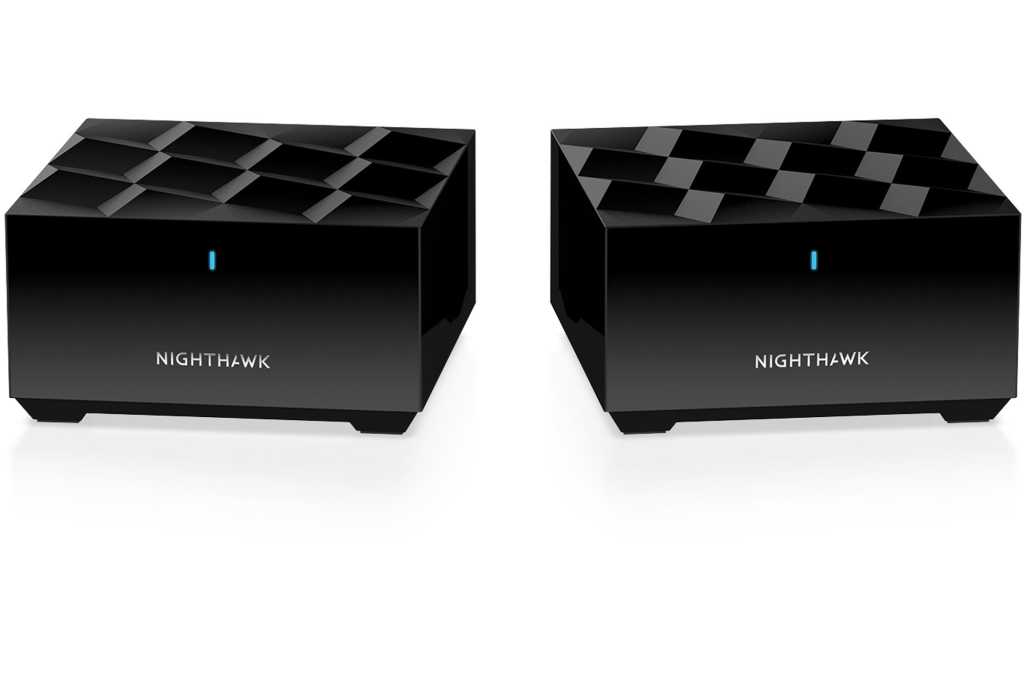 Long associated with high-performance “gaming” routers, Netgear has lent its Nighthawk brand to a new mesh Wi-Fi router designed to blend in with a home’s décor instead of calling attention to itself. The MK62 Nighthawk Mesh WiFi 6 System, pictured above, consists of a high-speed router and one satellite that promises 3,000 square feet of coverage.

Customers who need more coverage than that can add additional satellites, but Netgear says the router will follow the Wi-Fi Alliance’s WiFi EasyMesh standard, implying it will be compatible with other mesh Wi-Fi access points designed to the same standard.

Powered by a 1.5GHz quad-core processor and providing four simultaneous spatial streams, Netgear says the dual-band MK62 should have no trouble handling intense multiplayer gaming, 4K video streaming, and VR/AR applications. It will deliver maximum throughput of 600Mbps on its 2.4GHz frequency band, and up to 1,200Mbps on its 5GHz band. The router is equipped with one gigabit WAN port and one gigabit LAN port, while the satellite has one gigabit LAN port.

Netgear says the MK62 will be available by the end of January and will cost $229.99. The add-on mesh satellite (model number MK63) will reach the market in March, but the company has not yet released pricing for it.

This is a dual-band device that promises to deliver up to 600Mbps on its 2.4GHz network and—using 160MHz-wide channels—maximum theoretical throughput of up to 4.8Gbps on its 5GHz network. It’s equipped with one gigabit WAN port and four gigabit LAN ports. Netgear expects to ship the Nighthawk AX6 in March, but has not yet announced pricing.