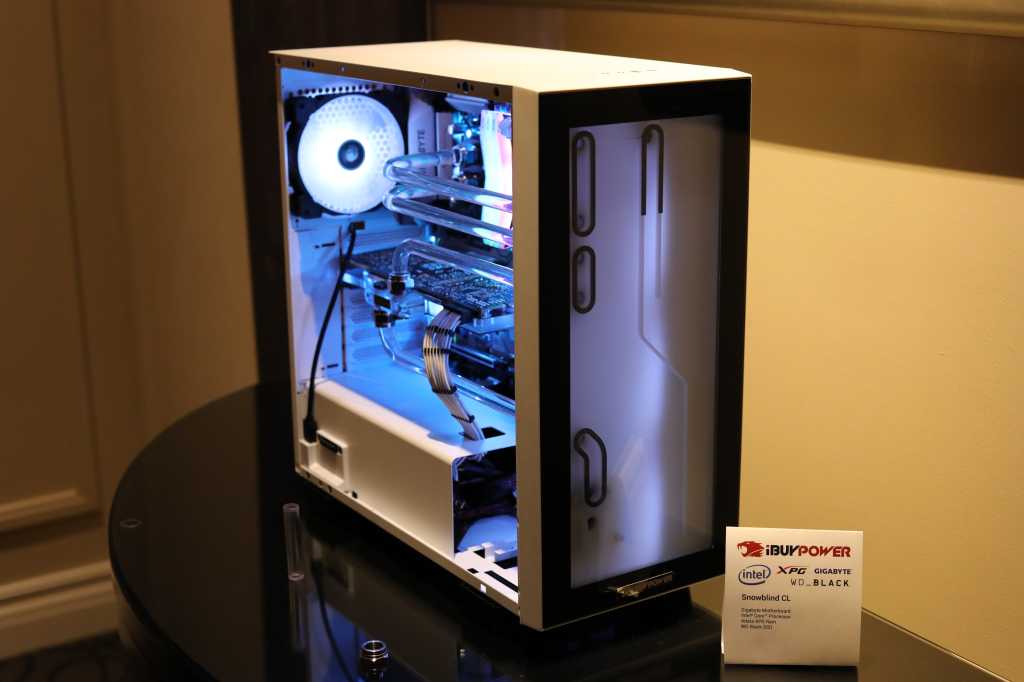 Custom loop cooling for CPUs and GPUs in a pre-built PC has long been recognized to be more beautiful, more efficient—and more expensive.

iBuypower’s Project Snowblind CL plans may change all that. It turns what is normally a five-hour process into a 10-minute process, essentially putting custom water loop cooling within reach of normal budgets.

Shown at CES in Las Vegas, Project Snowblind CL is built on a custom-designed case with a water distribution block in the front bezel of the PC. The fixed inlets and outlets mean a single case can be used with different components. This eliminates the need for custom fitting and the routing of each hardline tube.

Each tube is also traditionally custom-cut and bent by a tech building a machine. Humans are artisans, but when you want every tube the same, you turn to a machine. By using a machine to bend every tube, iBuyPower can eliminate the variations that might slow down a build.

Rather than using traditional compression fittings, which are usually hand-tightened—another inconsistent human issue—the company will use a nut that locks onto a hardline tube once it’s inserted, again eliminating variability which may also cause leaking. The nut isn’t permanent and can be unlocked, but only by pressing on a collar on the fitting.

Because every GPU is different, iBuypower will make its own custom water blocks, but with the inlet and outlet in the same place on every card. This lets the same hardline tubing be the same on every build, regardless of whether it’s a Radeon 5700XT or a GeForce RTX 2080 Ti

One sticky part iBuypower hasn’t quite solved is the CPU’s cold plate, or water block. Motherboard makers all shift the socket around, so the tubes would not fit. The company is looking at offering only fixed selections of motherboards to consumers to lower the variability, and also developing either a flexible system at the water block or a large shim.

iBuypower said the system should not require maintenance for three to five years, but it has made provisions for servicing with fill and drain ports hidden in the water distribution block.

If iBuypower can get that to work, it says the result will be a huge savings in the time it takes a technician to build a PC. Going from five hours to ten minutes can mean a consumer would be able to buy a gaming PC with hardline custom loop cooling for maybe $100 to $120 over a typical All-in-One build, instead of hundreds of dollars more.

The company hopes to have both a Project Snowblind CL version and a standard version of its CL out this year, if it can solve the last few issues.