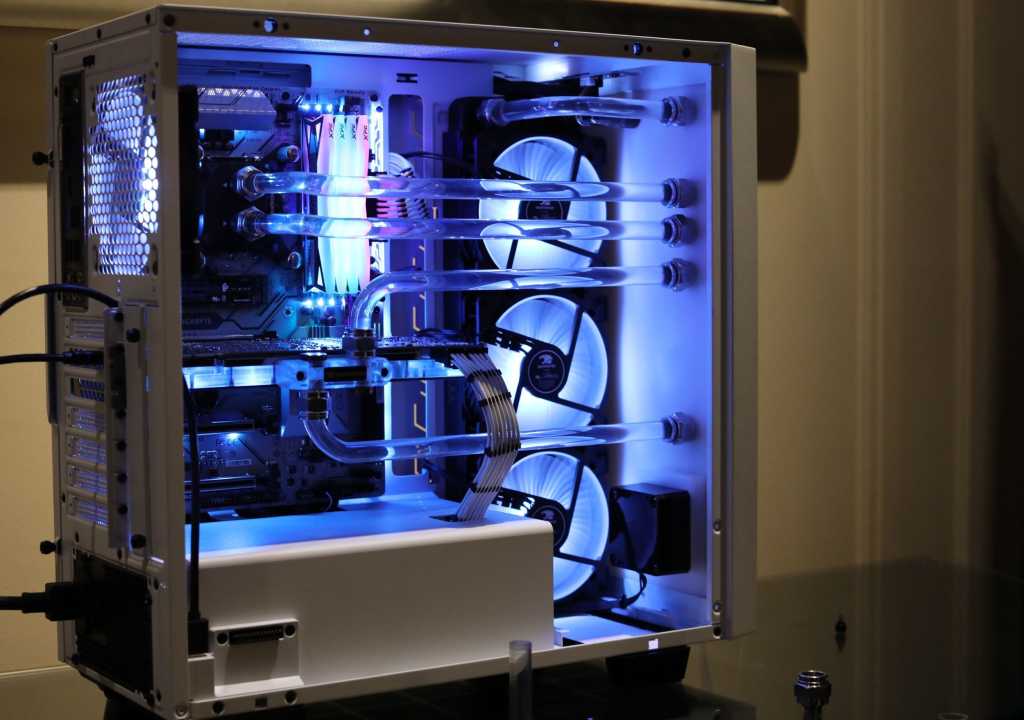 Another CES is in the books, and this time around, the annual techstravaganza served as a harbinger for the disruption aimed at PCs in 2020. Things are about to get funky, friends.

AMD opened a new front in the war against Intel, Intel fired shots at AMD and Nvidia, and monitors were being pushed to blazing-fast new limits left and right. Laptops embraced newfound form factors. Desktops got weird. Heck, we even saw a détente in the battle between consoles and PC gamers in bold, badass fashion.

We were there to capture it all. Here’s a recap of the CES 2020 reveals that PC enthusiasts need to know about. Hit those links for deeper details throughout.

AMD vs. Intel vs. Nvidia

Let’s start with the heavy hitters powering the chips inside the PCs you buy.

After claiming desktop dominance from Intel for the first time in a long time in 2019, AMD came out swinging at laptops at CES 2020. The company revealed Ryzen 4000 laptop processors at its keynote, built using the same 7nm process that made 3rd-gen Ryzen and Threadripper CPUs so great, with both energy-efficient U-series and gaming-ready H-series processors planned. Get this: AMD says it’s introducing “the best laptop processor ever built,” and claims that its top-tier H-series chip can outpunch even Intel’s desktop Core i7-9700K in some scenarios. Hot damn.

AMD also revealed pricing, speed, and release date info for its monstrous 64-core Threadripper 3990X. It’ll cost $3,990, appropriately enough, when it launches on February 7. We also chatted with Ryzen development leader David McAfee for further insights into Threadripper 3990X and Ryzen 4000, as well as Anandtech’s Dr. Ian Cutress for how Ryzen 4000 squares up against Intel in laptops.

Laptop makers are already lining up to deploy the latest Ryzens, a stunning turnaround from the norm for AMD. The company says over 100 laptops will ship with Ryzen 4000 inside, with several flagship models on display at CES. Dell’s G15 SE will serve as a showcase for AMD’s mobile efforts, with both Ryzen 4000 and Radeon 5000M chips inside. The 3.5-pound. Asus ROG Zephyrus G14, meanwhile, taps into the energy efficiency of AMD’s new CPU and Nvidia’s Max-Q GeForce technology to offer the world’s first 14-inch RTX laptop. This thing looks badass. Acer’s Swift 3, meanwhile will come with either Intel or AMD inside.

Are the tides finally turning for AMD’s notebook efforts? It certainly seems like it.

At the end of our chat with Ian Cutress, he muses about the future for AMD’s Radeon graphics cards, because AMD revealed the Radeon RX 5600 XT during its keynote as well. It’s basically a lower-clocked version of the Radeon RX 5700 with 6GB of memory and a $279 price tag. Look for it to take on Nvidia’s GeForce GTX 1660 series for PC gaming’s 1080p sweet spot when it launches January 21. In a small roundtable with press after the keynote, AMD CEO Lisa Su revealed what’s next for Radeon: high-end Navi GPUs and real-time ray tracing.

Intel isn’t taking the threat lying down, naturally. It revealed an array of news at CES 2020, the most interesting being the grand unveiling of early versions of its discrete DG1 graphics in both desktop and laptop form, based on the company’s Xe graphics architecture. DG1 products are scheduled to launch sometime this year.

Things were quieter on the CPU front. Intel confirmed that “Tiger Lake” is the next CPU codename you need to care about, but didn’t say much beyond that, though a Thunderbolt 4 tease quickly devolved into a mess. (But hey, USB4 logos will actually make sense!) On the brighter side, the company said that Comet Lake H mobile processors will hit 5GHz when they launch later this quarter, and showed off several big wins in radical laptops thanks to its Project Athena initiative and its investment in innovative form factors. We’ll cover laptops more extensively later.

Intel also showed off its much-leaked “Ghost Canyon” NUC, which is basically a mini-PC-in-a-mini-PC that revolves around a replaceable Intel Compute Element card stocked with the mobile CPU, RAM, chipset, and storage. There’s PCIe x4 and x16 slots next to the Compute Element, too, ready to accept discrete graphics and storage add-in cards—handy preparation for when Xe launches later. Watch Alaina rip inside Ghost Canyon in the video above.

Nvidia had a lower profile at CES 2020. It didn’t release updated graphics cards, show off a new Shield console, or (finally) launch GeForce Now out of beta. But the company brought it when it came to monitors, showing off face-melting 360 freakin’ Hz G-Sync Esports displays, and new mini-LED G-Sync Ultimate monitors with 1,152 backlight zones capable of a blazing 1,400 nits. We called the first wave of G-Sync Ultimate displays the Holy Grail of gaming monitors, and these look even better.

The GeForce software team also released a feature-laden Game Ready driver for the show, introducing real-time ray tracing in Wolfenstein: Youngblood and much more. It also announced that boutique PC builders can now offer RTX Studio-validated systems for content creators, and Nvidia will toss in three free months of Adobe’s Creative Cloud if you buy one.

Desktop builders always bring their craziest concepts to CES, and 2020 was no exception. Razer’s Tomahawk N1 blends the design of the company’s Razer Core external graphics card dock with Intel’s new card-based NUC technology to create a dead-simple, damned sleek DIY PC. It’s pretty appealing, though Razer’s been more miss than hit when it comes to actually launching the wild concepts it shows off at CES, so we’ll see if you’re ever able to actually buy one.

Corsair’s Project Orion, on the other hand, leans heavily on the revolutionary Capellix LEDs that Corsair introduced at last year’s CES. Project Orion’s a modified Corsair Crystal 465X case with the Capellix LEDs lining the inside of its glass panels. Embedded into a transparent film, the ultra-bright LEDs illuminate the exterior of the case without interfering with the clarity of the view of the internal components. Behold its dazzling beauty in the video above.

Then there’s the Big O, a revival of a decade-old oddity by recent Corsair acquisition Origin PC. Big O pairs a high-end PC with a liquid-cooled console in a single Corsair Crystal Series 280X case, then tosses in an optional Elgato 4K60 capture card for the ultimate streaming box. Who says console and PC gamers can’t get along? You’ll be able to heavily customize the components and aesthetics of the Big O, as you’d expect from an Origin PC product.

Dell blended console and PC in its own way with the Alienware Concept UFO, which looks like a Nintendo Switch but runs full-fledged Windows 10. Cool stuff. The company also showed off Concept Ori, a folding PC built around a single large screen, and Concept Duo, a laptop that replaces the usual keyboard with a second large display. Because they’re concepts, we don’t know whether they’ll ever make it to market, so think of them as hints of what Dell’s working on for future PCs rather than actual product announcements. That being said, Concept UFO looks sick.

Finally, it might not be as outwardly exotic as the other desktops shown above, but iBuyPower’s Project Snowblind CL could make custom loop cooling easier and cheaper, and that’s a welcome development for PC enthusiasts. Custom loop cooling for CPUs and GPUs in a pre-built PC has long been recognized to be more beautiful, more efficient—and more expensive. Project Snowblind CL may change all that. It turns what is normally a five-hour process into a ten-minute process, essentially putting custom water loop cooling within reach of normal budgets.

Next page: The laptops, routers, and storage of CES 2020

Most of the PCs sold today ship as laptops, not desktops, so it should come as no surprise that laptops could be found in every nook and cranny of the CES 2020 show floor. While many of the models on display were thinner, better versions of standard form factors, built to accommodate new hardware from the big-name chip vendors, we also saw a surprising amount of form factor innovation this year.

Lenovo showed off a foldable tablet of its own, a $2,500 machine dubbed the ThinkPad X1 Fold. Another oddity? The ThinkBook Plus, which plops a secondary e-ink displays to the outside of the laptop’s lid, ostensibly to help you focus. Weird. But maybe cool? But weird.

Lenovo also revealed the Yoga 5G, based around Qualcomm’s Snapdragon 8cx chip and touted as the first 5G PC, complete with a nanoSIM card slot. It promises all-day battery life, unlike the Microsoft Surface Pro X built using a Qualcomm variant, though app compatibility will still be something to watch. For gamers, there’s the Lenovo Legion Y740S, a gaming laptop with no discrete graphics, as it’s made to pair with the Legion BoostStation—Lenovo’s debut external graphics card dock.

The Acer ConceptD 7 Ezel and Ezel Pro bring a funky, yet useful dual-hinge configuration as well as even beefier hardware to our favorite content creation laptop of 2019. It can flip and rotate its display into five different modes, from traditional clamshell to tablet, and it’s touch/pen friendly as well.

Acer also showed off the Swift 3 thin-and-light mentioned earlier, with your choice of Intel or Ryzen 4000 chips inside.

The HP Spectre x360 15t is getting even thinner and smaller, with a battery that just won’t quit even with a 4K display in tow. The company says a special two-watt—two-watt—4K panel helps the laptop achieve up to a whopping 17 hours of endurance. Yes please! HP’s impressively sleek Elite Dragonfly business laptop, meanwhile, is getting easy-peasy device tracking thanks to Tile integration, while the HP Envy 32 is an all-in-one PC that actually kicks ass with a 4K HDR display, RTX graphics, and speakers that get loud. (It still packs a mobile processor though.)

Dell’s XPS 13, the laptop that kicked off the narrow-bezel revolution, took it to another level at CES 2020 with, well, even narrower bezels, along with a move to a 16:10 aspect ratio. The laptop also upgrades to Intel’s latest 10th-gen “Ice Lake” processors, a replaceable M.2 SSD, an infrared Windows Hello biometric camera, and an overhauled cooling design.

The ultra-premium Dell Latitude 9510 appears ready to shake things up for business types, with an ultra-compact design, 5G integration, and Dell Optimizer software that analyzes your usage patterns and tries to save you time with routine tasks. Interesting!

There’s more where those came from. The Asus Zenbook Duo takes a second stab at the company’s dual-screen concept, shrunk down and equipped with more modest hardware. Samsung’s vivid red Galaxy Chromebook is a daring bet on premium Google laptops. Dynabook, essentially the rebranded rebirth of Toshiba laptops, rolled out an ultralight rival for HP’s Elite Dragonfly, as well as a Comet Lake business laptop…with a DVD drive? That’s not something you see very often these days.

Wrapping things up, we also saw some new networking and storage gear revealed at the show.

On the networking front, Linksys unveiled a pair of mesh routers based on Wi-Fi 6. Netgear, meanwhile, added 4G LTE capabilities to its wonderful Orbi mesh router, and expanded its popular Nighthawk line into mesh routing as well—though the MK62 Nighthawk Mesh WiFi 6 System ditches the series’ iconic aggressive design for a boring “black box” look in the transition.

And to think, this bounty of gadget-y goodness was unveiled at the very start of the year. PC enthusiasts have a lot to look forward to in 2020!