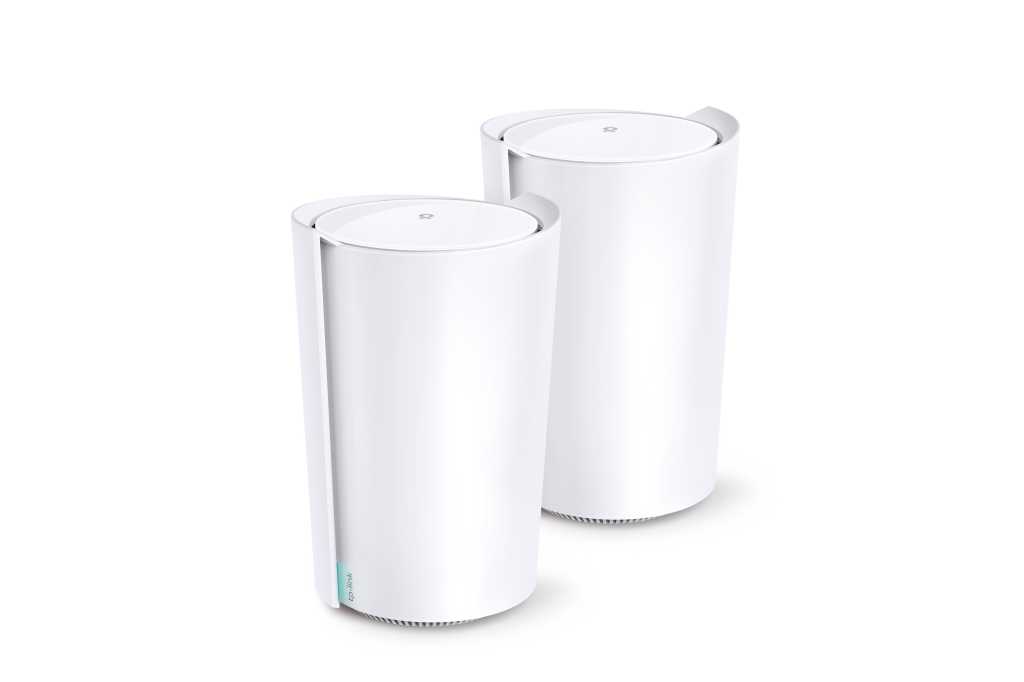 TP-Link is showing three new mesh Wi-Fi routers at CES. Each model in the good, better, best Deco lineup is based on Wi-Fi 6 (aka IEEE 802.11ax), but none of them have the integrated Zigbee smart home hub that TP-Link brought to market with its earlier Deco M9 Plus.

The TP-Link Deco X90 leads the pack. This tri-band router promises to deliver 574Mbps on its 2.4GHz network, 1,201Mbps on its first 5GHz network, and a staggering 4,804Mbps on its second 5GHz network. The router has a dynamic backhaul feature that can utilize all three networks for that purpose. TP-Link says a $450 two-pack should be able to blanket up to a 6,000-square-foot home with Wi-Fi when it ships in April.

If you’re fortunate enough to have an ISP that can deliver gigabit broadband to your home, the Deco X90 is outfitted with a 2.5Gbps WAN port.  All three models have just one gigabit LAN port, however, so you’ll need a switch if your home has wired ethernet infrastructure.

For less demanding home environments, TP-Link’s new Deco X60 is a dual-band mesh Wi-Fi router capable of delivering up to 574Mbps on its 2.4GHz network and 2,402Mbps on its 5GHz network. TP-Link says a $270 two-pack should be capable of servicing up to 150 devices simultaneously, spread out over 5,000 square feet.

TP-Links’ entry-level mesh router, the Deco X20, will be sold in a two-pack for $190 and in a three-pack for $270 when it ships in March. You’ll get the same wireless throughput of 574Mbps on this router’s 2.4GHz network, but speeds will drop to 1,201Mbps on its 5GHz network.

TP-Link is continuing its partnership with the cybersecurity firm Avira to offer HomeCare Pro on its mesh routers. The service offers optimized security for IoT devices such as a smart bulbs and smart thermostats, to prevent hackers from hijacking them. HomeCare Pro also includes customizable parental controls, but the service is not free: After a free trial, a subscription will cost $5.99 per month or $54.99 per year.

If gaming is your passion, TP-Link has a new line of powerful Wi-Fi 6 gaming routers. The top-of-the-line Archer GX90 is a tri-band model that promises to deliver up to 574Mbps of wireless throughput on its 2.4GHz network, up to 1,201Mbps on its first 5GHz network, and up to 4,804Mbps on its second 5GHz network that’s specifically dedicated to gaming. This one has a 2.5Gbps WAN/LAN port, a 1Gbps WAN/LAN port, and a three-port gigabit LAN switch onboard. Added connectivity comes in the form of a USB 3.0 port and a USB 2.0 port.

The Archer GX90’s Gaming Accelerator feature will automatically detect gaming-oriented traffic on the network and assign it a higher priority to deliver the best performance with online games. TP-Link expects the Archer GX90 to fetch $330 when it ships in in late Q2.

If you can’t wait, or you don’t need the gaming features, the Archer AX90 is essentially the same router less those gaming optimizations. This model features the same aggressive industrial design and will cost $300 when it ships in April.

TP-Link didn’t send me any information on this directional Wi-Fi antenna, because it’s aimed (no pun intended) at the enterprise market, but it caught my eye at the show. Mount one TP-Link CPE710 outside the building where your router is located, and you can beam an 802.11ac Wi-Fi signal with up to 867Mbps of throughput to a distant location—the spokesperson I talked with told me its range could be measured in kilometers.

You’ll need to install a second CPE710 at the receiving location, and connect it in turn to a Wi-Fi access point to create a second Wi-Fi network there, but it means you won’t need a second ISP service plan at that second location. You’ll make up the cost of the two antennas (expected to be less than $150 each) in no time.